Home » Planet » Nature in Danger » The Link with Livestock

The Link with Livestock 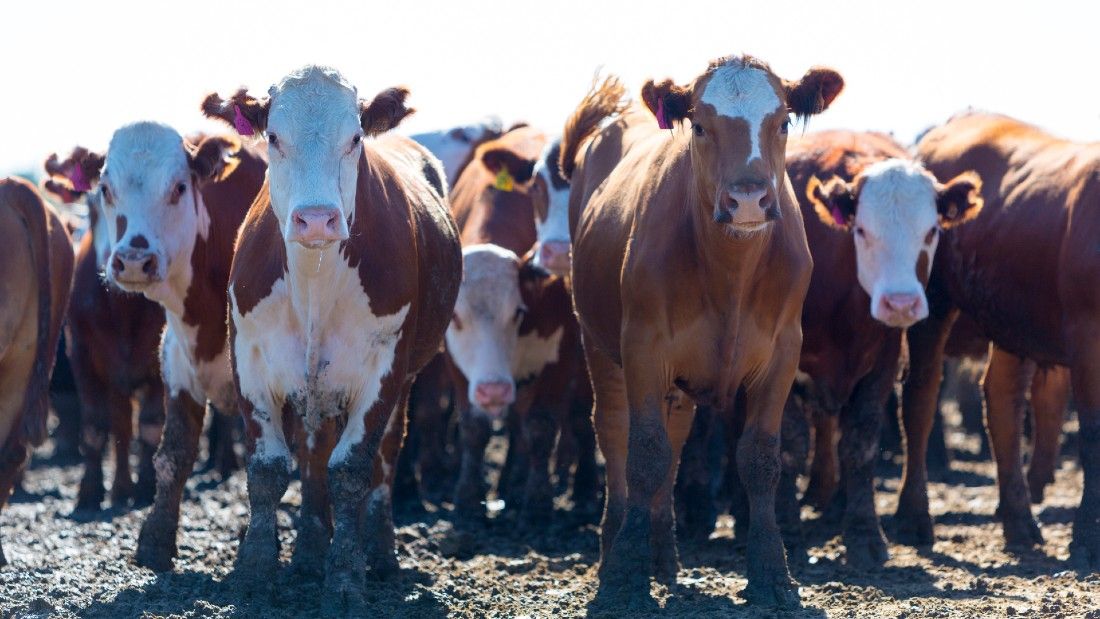 The human appetite for animal protein comes at a high price. Nearly three-quarters of the world’s fresh water is used for livestock and crops (including animal feed), often at the expense of tropical forests, wetlands, grasslands and the plants and animals that inhabit them.

Magnificent mammals, such as Africa’s cheetahs and mountain gorillas, the UK’s hedgehogs and water voles and the hooded seals of the cold waters of the North Atlantic and Arctic Oceans are just a mere few of those affected by livestock farming and aquaculture.

Climate change is directly impacting nearly one in five of all threatened species but over-exploitation and agricultural activity are the most prevalent threats.

“You eat a steak, you kill a lemur in Madagascar. You eat a chicken, you kill an Amazonian parrot.”

As the global human population grows, more and more land, water, energy and other precious resources are being taken to meet the ever-growing demand for cheap meat, fish, eggs and dairy. Species-rich habitats are being converted for grazing and animal feed crops to meet this relentless and insatiable demand. There is a tendency for reports about threats to biodiversity to focus on climate change as the main cause, but most the world’s threatened species are being put at risk by agriculture, land conversion and overharvesting.

Writing in the journal Nature, a team from the University of Queensland, the Wildlife Conservation Society and the IUCN assessed around 9,000 near-threatened or threatened species on the IUCN’s Red List against 11 threats: overexploitation, agricultural activity, urban development, invasion and disease, pollution, ecosystem modification, climate change, human disturbance, transport and energy production. They found that overexploitation and agricultural activity were by far the most prevalent threats and said the expansion of agriculture alone is threatening 62 per cent of threatened and near-threatened species (Maxwell et al., 2016).

This study found that Africa’s cheetah, South America’s huemul deer and Asia’s hairy-nosed otter, for example, were among those affected by livestock farming and aquaculture. The Fresno kangaroo rat and the African wild dog, they say, are under threat from land use changes associated with the production of food, animal feed and biofuels. Climate change – leading to storms, flooding, extreme temperatures, drought and sea-level rise – is an increasing factor affecting nearly one in five threatened or near-threatened species, according to this study. Hooded seals were among them and have dropped in abundance by 90 per cent in the North-eastern Atlantic Arctic over the past few decades (Maxwell et al., 2016). 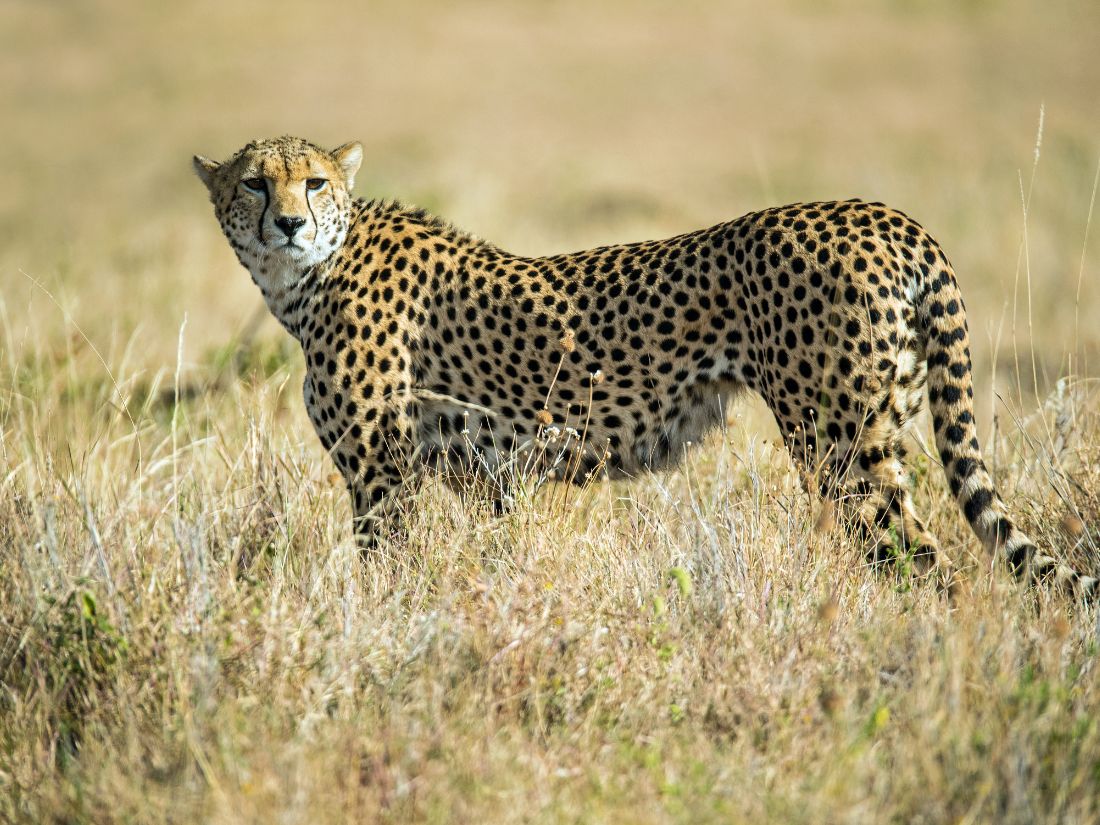 The insatiable hunger for animal foods is driving the expansion of intensive farming and industrial fishing such that more than a third of the world’s land and nearly 75 per cent of freshwater resources are now used for crop or livestock (grazing or animal feed) production (IPBES, 2019). This comes largely at the expense of tropical forests, wetlands and grasslands and the plants and animals that inhabit them.

The human appetite for meat and dairy comes at a high price.

The environmental impact of meat and dairy products far exceeds that of plant foods; meat, fish, eggs and dairy use around 83 per cent of the world’s farmland and contribute 56-58 per cent of food’s different emissions but only provide 37 per cent of the protein we eat and 18 per cent of calories (Poore and Nemecek, 2018).

A study published in the journal Science of the Total Environment revealed how livestock production is pushing the expansion of grazing and animal feed cropland into areas of high biodiversity. Many of the places seeing the greatest shifts in land use – from forest to livestock – are in countries with the largest number of species. By 2050, given current trends, this study predicts that these countries might have to increase the amount of land used for livestock by up to 50 per cent. They recommend that people reduce their consumption of animal foods, replacing them with more sustainable plant foods and say a future with a lower demand for meat, fish, eggs and dairy would drastically reduce habitat and biodiversity loss, fossil fuel energy use, greenhouse gas emissions and pollution while providing a nutritious diet that could greatly improve global health (Machovina et al., 2015).

If trends continue, greenhouse gas emissions from animal agriculture will rise as land for grazing and animal feed crops expands to meet the ever-growing demand for animal foods. This will lead to even more significant losses of biodiversity, scientists say, especially in South Asia, Sub-Saharan Africa and South America (Westhoek et al., 2011). 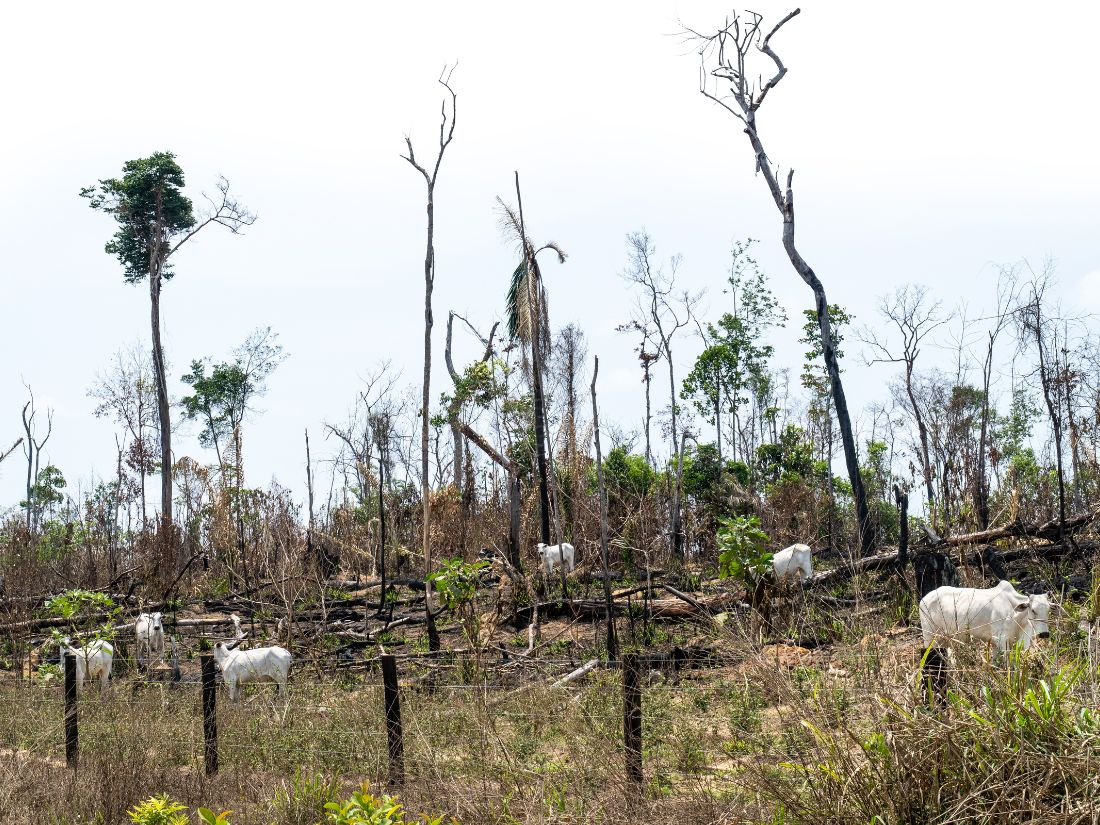 Deforestation is being driven by the hunger for meat

The relationship between biodiversity and climate change runs both ways. Climate change is an important driver of the loss of biodiversity. At the same time, the deterioration of natural habitats, such as rainforests, is contributing to climate change as trees and other plants that store carbon are lost.

The relentless exploitation and expansion of animal agriculture is destroying the natural habitats of animals and plants all over the Earth, on land and in the oceans, leading us into what now has been recognised as the sixth mass extinction. We don’t have to do this – it’s a choice and there is still time to put a halt to the destruction.

Machovina B, Feeley KJ and Ripple WJ. 2015. Biodiversity conservation: The key is reducing meat consumption. Science of the Total Environment. 536, 419-431.

Next Chapter: One Million Under Threat