Home » Planet » Nature in Danger » The Importance of Forests

The Importance of Forests 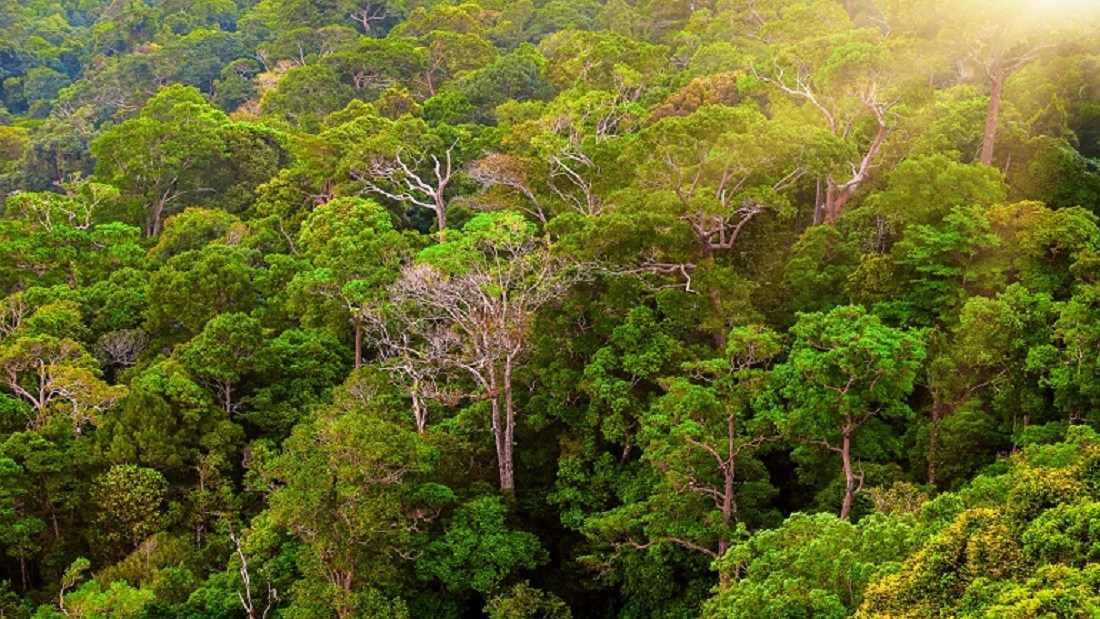 Agriculture is the main driver of global deforestation clearing the way for land for grazing and animal-feed crops.

Trees are a vital carbon sink and store around 40 per cent of all land carbon while producing up to 20 per cent of the world’s oxygen; mostly from rainforests.

The Amazon is biologically the richest region on Earth and is one of the last refuges for numerous species, including jaguars and pink river dolphins. It is home to sloths, black spider monkeys and poison dart frogs, and perhaps a million more undiscovered species.

“In my journal I wrote that whilst standing in the midst of the grandeur of a Brazilian forest ‘it is not possible to give an adequate idea of the higher feelings of wonder, admiration, and devotion which fill and elevate the mind.’”

Forests are vitally important for sustaining life on Earth and play a major role in mitigating climate change. During photosynthesis, trees absorb carbon dioxide, a major greenhouse gas, from the air and use the carbon, in combination with energy from sunlight, to build their trunks, stems and roots. This locking away of carbon is called “carbon sequestration”. The part of the tree that lies underground is an important carbon sink in forest ecosystems, estimated to store around 40 per cent of all land carbon (Jiang and Wang, 2017).

Trees and plants release oxygen during photosynthesis and it’s estimated that up to 20 per cent of the world’s oxygen comes from rainforests – which is why they have been referred to as the lungs of the world. This figure has recently been questioned as some of the oxygen released is then used up in growth (in respiration) and by animals and microorganisms that live in the forest. However, their important role in carbon storage is widely accepted. 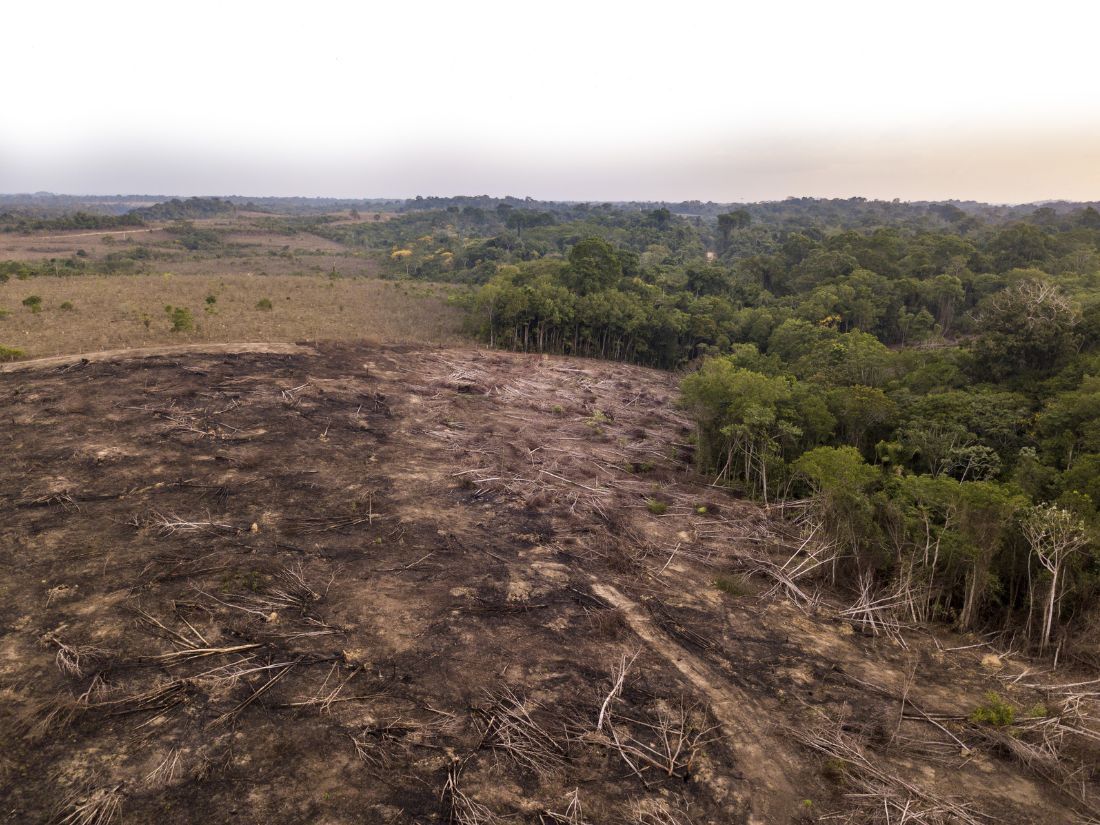 Carbon in, oxygen out

In this way, forests serve as a global asset, able to absorb and store carbon for long periods of time. When forests are felled to make way for agricultural land, they become a major contributor of carbon dioxide which is released back into the atmosphere. Deforestation represents a double-whammy for biodiversity in terms of habitat loss plus the additional negative impact on the environment from the loss of carbon storage contributing to climate change.

Tropical rainforests, found in hot, humid environments in equatorial climates, contain the most diverse range and highest volume of plant and animal life anywhere on Earth. Professor Marten Scheffer and colleagues from the Department of Aquatic Ecology and Water Quality Management at Wageningen University in the Netherlands said of rainforests: “They are among the most charismatic as well as the most endangered ecosystems of the world” (Scheffer et al., 2018).

The Amazon forest biome, including the Amazon rainforest, is biologically the richest region on Earth, hosting around 25 per cent of global biodiversity (Mahli et al., 2009). It is one of Earth’s last refuges for jaguars and pink river dolphins and it is home to sloths, black spider monkeys and poison dart frogs. A study published in Nature Scientific Reports found populations of the harpy eagle, the Earth’s largest eagle, are dwindling as tree canopies in the Amazon rainforest disappear along with the eagle’s preferred prey (Miranda et al., 2021).

THE BIGGEST THREAT TO FORESTS IS AGRICULTURE

In addition to the vast numbers of animals, plants, insects and microorganisms that we know of inhabiting the rainforests, scientists say there may be many millions more undiscovered species – we risk losing them forever if deforestation is allowed to continue.

According to the United Nations, the biggest threat to forests is agriculture, they say that it is the principal global driver of deforestation because of the extent to which forests are being converted to farmland for grazing and animal feed crops (UN News, 2019a).

Dr Erika Berenguer, from the University of Oxford, says that clearing land for beef production is the biggest driver of forest fragmentation, rather than timber or making space to produce palm oil or soya beans. Berenguer says: “Typically, gangs use a chain slung between two tractors to knock down trees quickly and at an industrial scale. Once the felled trees are dry enough, they are burned to leave the ground clear for cattle ranching” (Vaughan, 2019).

As agriculture expands, many of the world’s last tropical wildernesses, from the Amazon to Borneo to the Congo Basin, are being penetrated by roads. Writing in the journal Trends in Ecology and Evolution, Professor Bill Laurance from the Centre for Tropical Environmental and Sustainability Science at James Cook University in Brisbane has issued stark warnings about what happens when highways carve up the forest.

These clearings also enable species invasion, for example, of fire ants, earthworms, non-forest vertebrates and weeds (plants considered undesirable in a particular situation). Little fire ants spread through African rainforests 60 times faster along logging roads than through undisturbed forest and can kill or blind native species such as monkeys, apes, leopards and insects. Laurance warns: “As Pandora quickly learned, it was much harder to thrust the evils of the world back into the box, than to simply not open it in the first place” (Laurance et al., 2009).

Agriculture, and to a lesser degree logging and urbanisation, have chopped great swathes of tropical forest into fragments, disrupting habitats and reducing biodiversity. Scientists at the Helmholtz Centre for Environmental Research in Leipzig, Germany studied high-resolution satellite images revealing more than 130 million fragments of tropical forest across America, Africa and Asia-Australia. Using modelling techniques to predict what will happen if fragmentation continues, they said that all three continents are close to a critical tipping point beyond which fragment numbers will accelerate. This, they say, will have severe consequences for biodiversity and carbon storage. They offer a glimmer of hope, saying that if deforestation was slowed and reforestation increased, tropical forest cover could be preserved (Taubert et al., 2018).

According to data from the National Institute for Space Research (INPE), deforestation of the Brazilian Amazon has surged above an area equivalent to three football fields a minute (INPE, 2019), pushing the world’s biggest rainforest closer to a tipping point beyond which it cannot recover.

It’s a desperate situation, zero-deforestation is within reach, but it requires the political will to act now before it’s too late. You don’t have to wait for change: by going vegan, you could help reduce the driving force behind deforestation and if enough of us do it, protect rainforest biodiversity.

Mahli Y, Aragão LE, Galbraith D et al. 2009. Exploring the likelihood and mechanism of a climate-change-induced dieback of the Amazon rainforest. Proceedings of the National Academy of Sciences. 106 (49) 20610-20615.

Vaughan A. 2019. Deforestation in Brazil has rocketed since Bolsonaro became president. www.newscientist.com/article/2210621-deforestation-in-brazil-has-rocketed-since-bolsonaro-became-president/#ixzz5vvN2WZay

Next Chapter: Grassland Biomes in Crisis