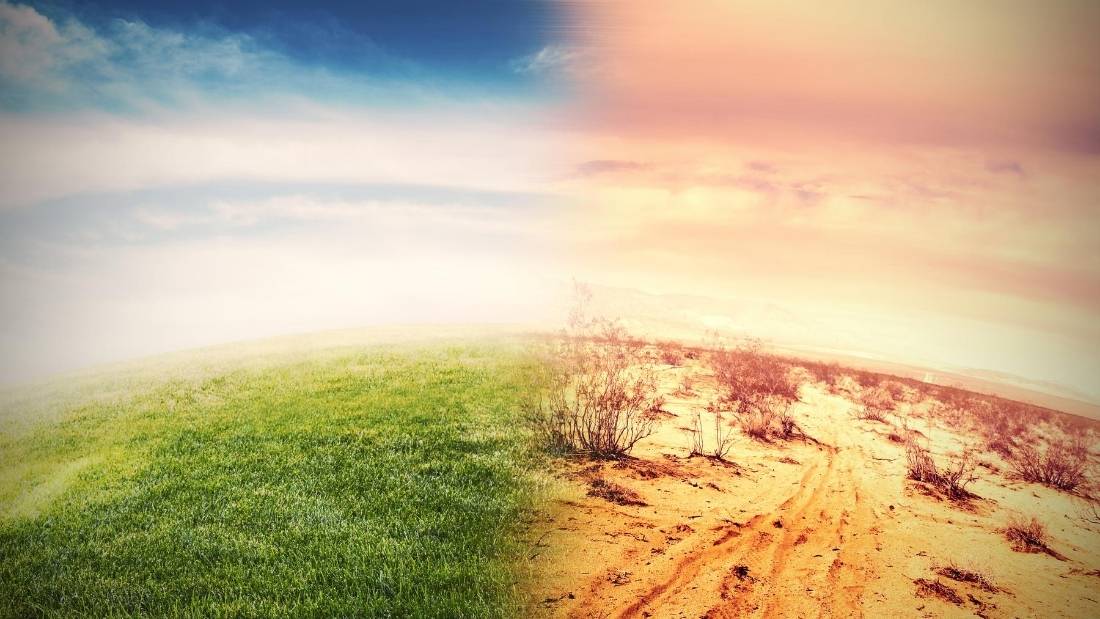 Animal agriculture contributes around a fifth of all human-induced greenhouse gas emissions, more than all the world’s transport combined.

Currently, the principal driver of biodiversity loss is habitat destruction with animal agriculture at the heart of the problem. However, in the next few decades, it is thought that climate change (also driven by animal agriculture) is expected to push even more species over the brink.

We are already seeing the effects with wildfires blazing in Australia, California and the Arctic.

Plants and animals are moving to new areas as their current habitats become too hot.

In the oceans, some organisms have moved hundreds of kilometres, but for ones unable to move, like coral reefs, the outlook is bleak.

In polar regions, the loss of sea ice is proving to be catastrophic for polar bears and other animals.

“While climate change has not been the dominant driver of biodiversity loss to date in most parts of the world, it is projected to become as or more important than the other drivers of change.”

Many scientists now believe that livestock emissions (especially methane), are probably much higher than this because breeding and feeding methods have changed, meaning that current estimates are based on out-of-date information (BMC, 2017). One study suggests that by 2050, emissions from meat and milk production could be 21 per cent higher than previously predicted (Hayek and Miller, 2021).

The principal cause of biodiversity loss at the moment is the loss of habitat due to a wide range of human-related causes but with animal agriculture at the heart of the problem. However, over the next few decades, climate change (which of course also has animal agriculture at the heart of it) is expected to push even more species over the brink – we are already seeing the effects.

Many plants and animals are moving into new geographical areas as their current habitats have become too hot. There are fears that the entire Amazon rainforest could be at serious risk. In the oceans, some organisms have moved hundreds of kilometres, but for others, unable to move, like coral reefs, the outlook is bleak and many have already died. In polar regions, the loss of sea ice is proving to be catastrophic for polar bears and other animals.

Global warming increases the risk of extreme weather events like hurricanes, cyclones and flash floods. It is also increasing the duration, frequency and intensity of heatwaves, which can have the effect of increasing the risk of fires. Leading climate scientists say there is an unequivocal link between Australia’s recent catastrophic bushfire season and climate change. Rising temperatures boosted the risk of the hot, dry weather (that is likely to have caused the recent bushfires in Australia) by at least 30 per cent, scientists say (van Oldenborgh et al., 2020).

Wildfires are a natural phenomenon and some tree species have adapted to tolerate fire. In fact, fire acts favourably for a small number of species such as eucalyptus. However, the increasing severity of fires in Australia and California suggests human activity is making them worse and more dangerous. A report compiled by scientists from the University of Sydney, University of New South Wales, University of Newcastle, Charles Sturt University and BirdLife Australia and commissioned by WWF-Australia, found that Australia’s devastating bushfires in 2019 and 2020 killed or displaced nearly three billion animals – far more than previously thought. They found that almost two-and-a-half billion reptiles were impacted, along with 180 million birds, 143 million mammals and 51 million frogs (WWF, 2020a). 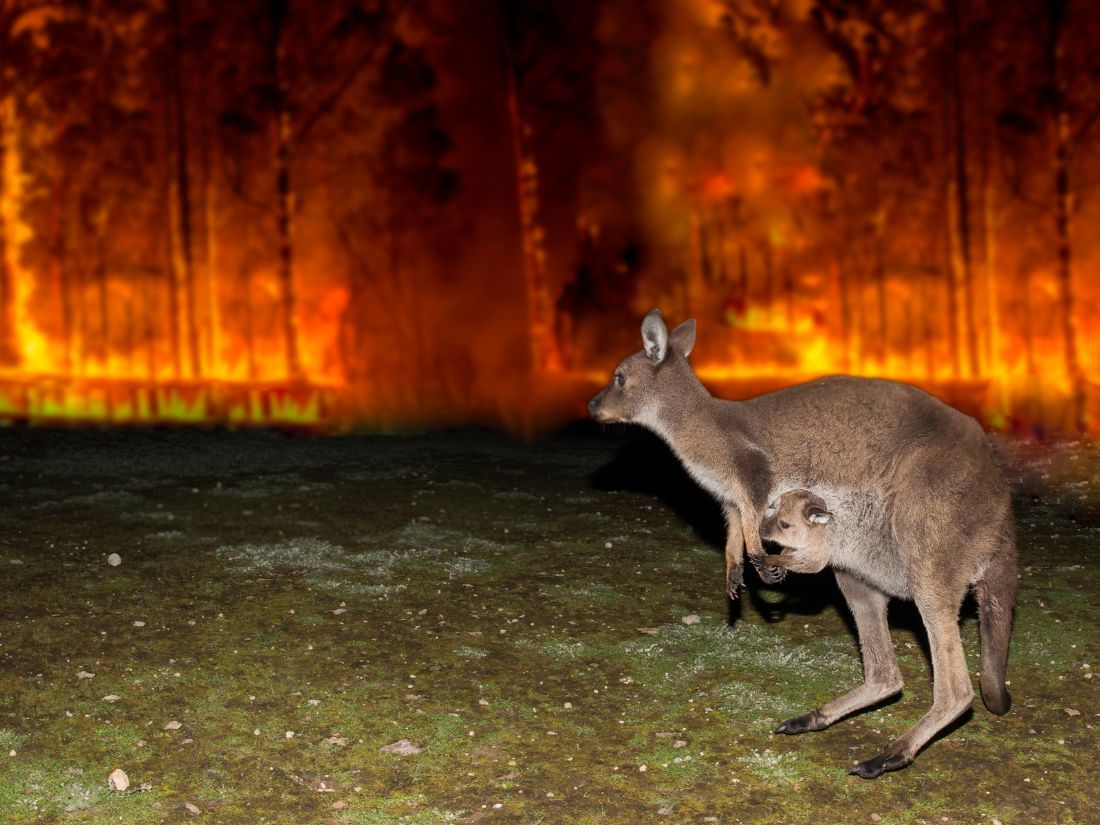 WWF-Australia CEO Dermot O’Gorman said: “It’s hard to think of another event anywhere in the world in living memory that has killed or displaced so many animals. This ranks as one of the worst wildlife disasters in modern history.” O’Gorman added that with extreme fires becoming more frequent due to climate change, the report’s findings “give other countries a window into the future of mega fires and their devastating impact on wildlife” (WWF, 2020a).

One of the lead researchers on this study, Professor Chris Dickman, from the University of Sydney, says the research shows that mega fires are changing the environment and depleting native biodiversity and change is necessary. Dickman says: “How quickly can we decarbonise? How quickly can we stop our manic land clearing? We land clear at a rate that’s one of the highest in the world” (WWF, 2020a).

Less than 5,000 miles away, emperor penguins in Antarctica are feeling the heat too. They need solid sea ice for most of the year while they find mates, breed and raise their chicks – but the ice is melting. One study of emperor penguins in Antarctica suggests that if emissions keep rising, the birds could die out soon after 2100. Stephanie Jenouvrier, from the Woods Hole Oceanographic Institution in Massachusetts, says that the future of these birds hinges on international climate efforts rather than their ability to adapt and move. “Penguins are this indicator species, this canary in the coal mine, they are warning us of the future effect of climate. The big message is we need to listen to the penguins, and implement policies to meet the Paris agreement’s objective, and we need to do that now” says Jenouvrier (Vaughan, 2019a). 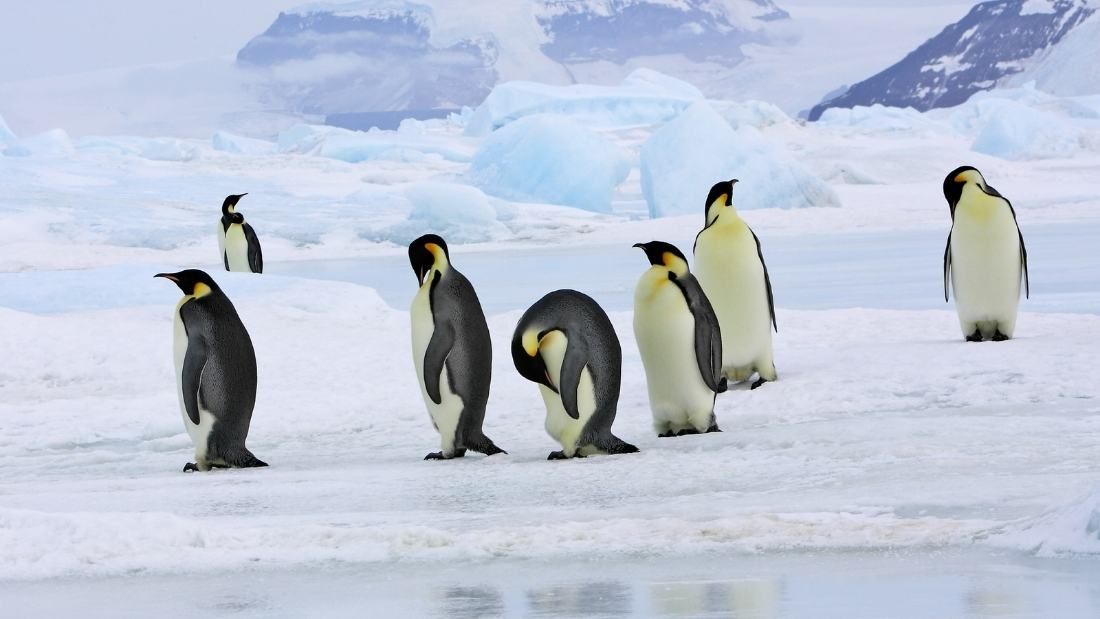 At the northernmost part of the Earth, the Arctic is experiencing similar, if not worse, problems. In the first six months of 2020, unusually high temperatures were recorded in this polar region, including a record-breaking 38°C in the Siberian town Verkhoyansk on 20 June (WWA, 2020). The increased and prolonged heat has led to Arctic wildfires blazing in northern forests and underground peat emitting the equivalent of 56 megatonnes of carbon dioxide in June 2020 (Copernicus Atmosphere Monitoring Service, 2020). The smoke from the wildfires is moving across Alaska, Canada and could eventually reach Greenland. Scientists are concerned that the air pollution from the fires may exacerbate respiratory problems in Russia, a country hit badly by Covid (Vaughan, 2020). Some of these underground “zombie fires” may have been smouldering since the previous year – this does not bode well for future years.

According to scientists, temperatures in the Arctic Circle were around 8°C above average for the first half of 2020 and 10°C above average in June. The effects have been widespread: the sea ice, which polar bears rely on to hunt their prey, has shrunk; fish are swimming deeper in the oceans looking for cooler water and a huge oil spill resulted from a container collapsing as the permafrost it sat on thawed in the heat (Vaughan, 2020). Although heatwaves do occur naturally, this one, scientists say, would have been almost impossible without the greenhouse gases human activity has pumped into the atmosphere. Research suggests this heatwave is thought to have been made at least 600 times more likely by climate change (WWA, 2020).

In other areas of the Artic, in Alaska and north-west Canada, the weather has been unusually wet and cold recently, with increased rainfall contributing to the loss of permafrost. This adds another layer of concern because as ice, which reflects sunlight, melts, it is replaced with darker water, which absorbs sunlight, thus contributing further to global warming.

Recent years have been disastrous for the Arctic, the fallout from which will have global impacts. However, according to scientists, there is still time to act. Associate Professor Merritt R. Turetsky, from the University of Colorado in Boulder, told the New Scientist: “To me, this is a warning, a cry from the Arctic. This is our early beacon sign of what’s to come in terms of rapid climate change around the world. We can still stave off the worst consequences of climate change, but our window to do that is small” (Vaughan, 2020).

Limiting further warming is crucial for the survival of wildlife and humanity. If the planet keeps warming, entire habitats could disappear along with all the species that inhabit them. The impact on humanity could be catastrophic. Going vegan is the single most effective way to reduce your greenhouse gas emissions.

BMC. 2017. Global methane emissions from agriculture are larger than reported, according to new estimates. www.biomedcentral.com/about/press-centre/science-press-releases/29-09-17

Vaughan A. 2019a. Emperor penguins could go extinct by 2100 if we fail on climate change. www.newscientist.com/article/2222752-emperor-penguins-could-go-extinct-by-2100-if-we-fail-on-climate-change/

Vaughan A. 2020. Fire and melting ice: The Arctic is having a terrifyingly bad year. https://www.newscientist.com/article/mg24732953-200-fire-and-melting-ice-the-arctic-is-having-a-terrifyingly-bad-year/

Next Chapter: Time for Action