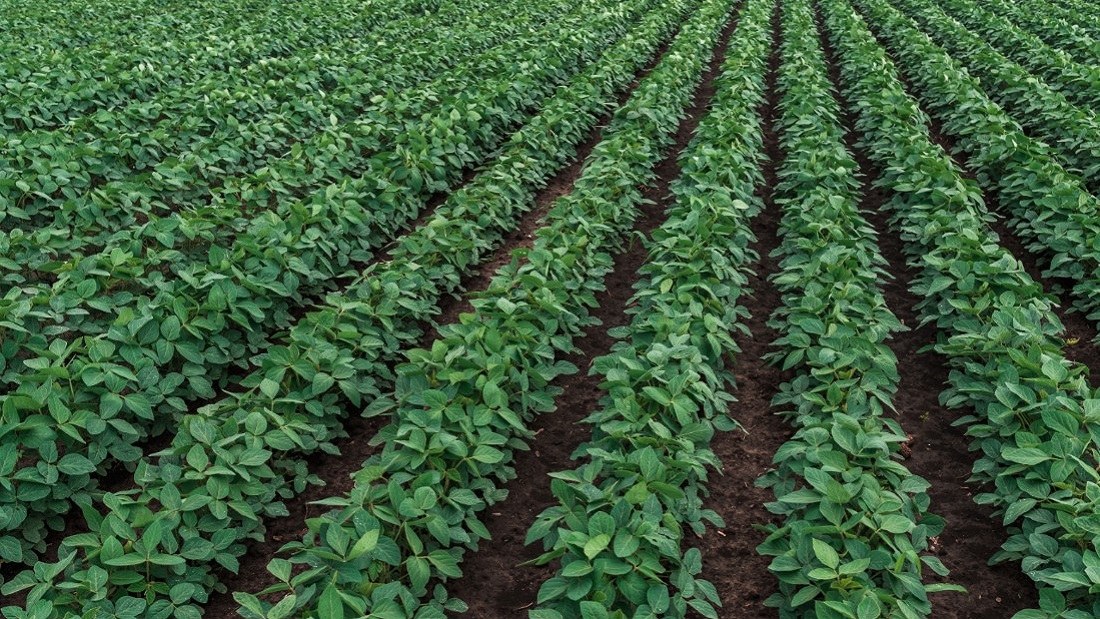 Three-quarters of the world’s food is generated from just 12 plant and five animal species.

The imbalance of life on Earth is staggering. There are 24 billion chickens in the world – more than three for every person. By weight, 60 per cent of mammals on Earth are livestock, 36 per cent are humans and only four per cent are wild.

Such massive livestock populations have profound consequences for biodiversity, including their contribution to climate change, deforestation, change of land use, overgrazing, degradation of grasslands and desertification.

Crops used to produce animal feed such as soya, maize and oil palm, means that all meat-eaters globally are contributing to this destruction.

“Three quarters of the world’s food is generated from just 12 plant and five animal species.”

Agricultural biodiversity is the variety of animals, plants and microorganisms used directly or indirectly for food and agriculture (Committee on World Food Security, 2017). In the same way that wild animals and plants are disappearing, the number of different animal and plant species that humans eat has fallen dramatically over the last 50 years. Variety may be the spice of life, but it is also the spice of food and we are clearly missing out.

In India, there are more than a thousand varieties of mango, yet just a handful are commonly grown. The Tommy Atkins is one of the most commonly sold mangos in the world as it has an extremely long shelf-life. However, there are many others including ones that taste of coconut or pineapple, which most people will never taste. 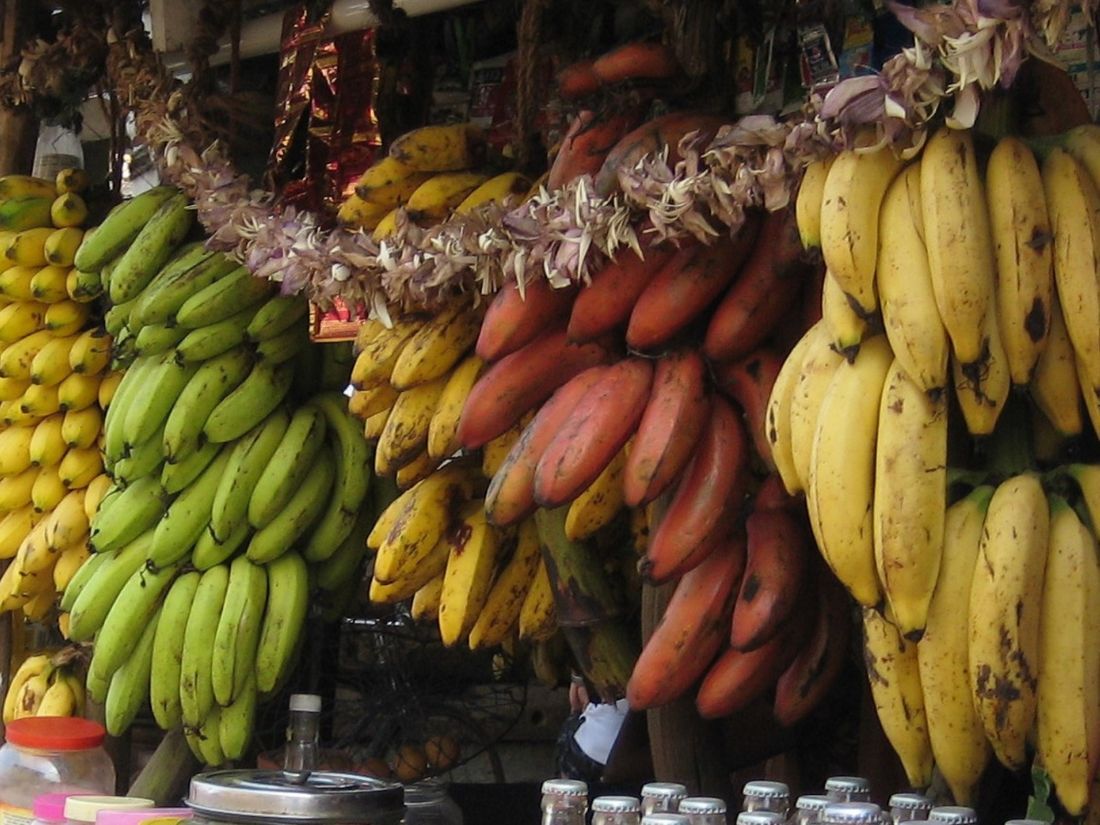 For bananas, just one variety, the Cavendish, accounts for 47 per cent of worldwide production and 99 per cent of the commercial export sale to developed countries, despite there being over 500 varieties including the Blue Java – the ice cream banana, so named for its blue skin and creamy, ice cream-like texture; the Macabu, which is black when fully ripe with a sweet pulp; the Niño, a mild and finger-sized fruit and the Burro banana, which has squared sides and a lemon flavour when ripe. It’s disappointing that we limit ourselves to just one type of banana when so many different and exciting varieties exist.

The same story of selective breeding and mass production is shared by most other crops we consume nowadays and estimates suggest that only 30 of the 7,000 or so edible plant species are being used to feed the world’s population (Committee on World Food Security, 2017). Most land used to grow cereals and grains is only farmed with wheat, maize or rice (Committee on World Food Security, 2017). We seem hell-bent on creating a world dominated by just a few species of animals and plants – a situation any biologist would recognise as precarious!

“Globally, local varieties and breeds of domesticated plants and animals are disappearing. This loss of diversity, including genetic diversity, poses a serious risk to global food security by undermining the resilience of many agricultural systems to threats such as pests, pathogens and climate change.”

Where you have diversity, there will be a range of survival strategies and abilities. Some species, for example, may be susceptible to a particular disease that others are able to withstand. Ignoring that is called ‘putting all your eggs in one basket’ – diversity is an insurance.

In Ireland, in the mid-1800s, the widespread dependency on just one single crop – the potato – plus the lack of genetic variability among the potato plants (a monoculture), were two reasons why the emergence of potato blight had such a devastating effect. It’s estimated that about one million people died either from starvation or disease and a million more emigrated.

We seem to have learnt nothing from the lessons of history as plants and animals are still selected for uniformity and suitability to intensive farming methods, such that global food production is now dominated by just a handful of species farmed in huge monocultures and mega farms.

There are more pigs than people in Denmark and there are concerns that other countries may soon follow. The Ministry of Environment in Spain released figures in 2018 saying that around 50 million pigs were slaughtered in the country the previous year, more than Spain’s 46.5 million population. Many of these pigs would have been slaughtered shortly after they were born. This led to concerns that Spain’s pig population may soon surpass its human population.

When you consider how much of life on Earth is made up of individual species, there are a number of different ways to quantify the contribution of each. You can, for example, count the number of species, population size or the number of individuals. But these metrics can make it difficult to compare between groups: small organisms may have a large population but still account for a very small percentage of Earth’s organic matter. For a meaningful comparison, some scientists quantify life using biomass (weight).

In terms of biomass, over 70 per cent of all the world’s birds are chickens and other domesticated poultry, with wild birds making up the remaining 30 per cent (Bar-On et al., 2018). In terms of numbers, there are 24 billion chickens and less than eight billion people in the world – so more than three birds for every single person on the planet. Whichever way you look at it, domesticated poultry are massively over-represented among the world’s bird population.

It’s a similar scenario for mammals. If you weighed the global cattle population, that biomass would be greater than the weight of all the world’s humans (Bailey et al., 2014). Again, by weight, 60 per cent of the mammals on Earth are livestock, 36 per cent are humans and only four per cent are wild (Bar-On et al., 2018).

Such massive livestock populations have profound consequences for biodiversity for several reasons. These include their contribution to climate change, deforestation, change of land use, overgrazing, degradation of grasslands and desertification (Bailey et al., 2014). The only clear solution to this problem is to stop eating meat, fish, eggs and dairy and go vegan. 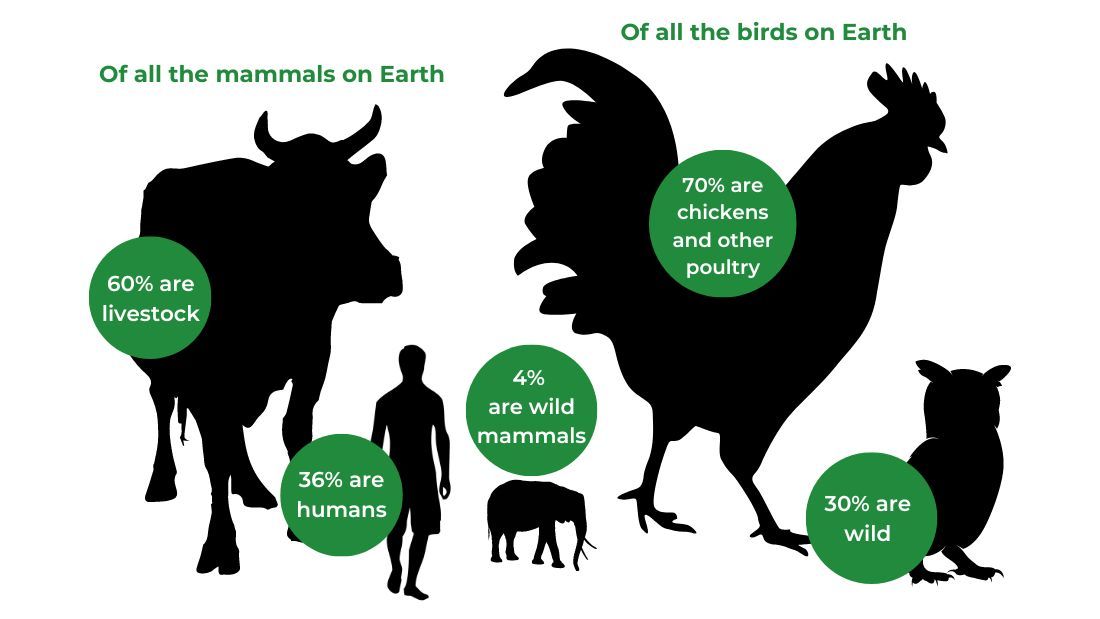