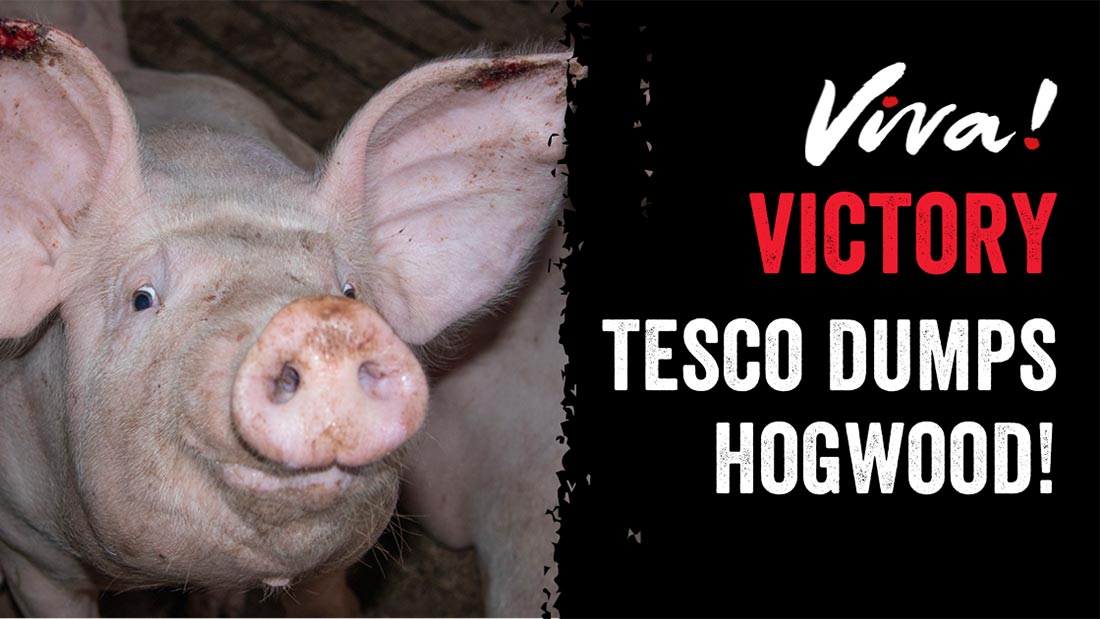 Viva! have published disturbing undercover footage taken inside Hogwood Pig Farm in Warwickshire. The footage shows systematic animal abuse and extreme cases of animal suffering, including piglets being roughly handled and hit by farm workers and one pig being brutally attacked and bitten by others.

This investigation is the third consecutive investigation of Hogwood Farm. In previous years, Hogwood hit the headlines with cases of severe overcrowding, pigs covered in excreta, and barren, filthy conditions and dead pigs left to rot amongst the living. Most shockingly, one piglet was being eaten alive.

In a statement to the Mail on Sunday, Tesco branded the footage “distressing and unacceptable” and claimed that Hogwood Farm is “well below our high animal welfare standards”, stating that the farm would be dropped with immediate effect.

Juliet Gellatley, Viva! founder and director explains the importance of this decision:

“This news is a huge victory! We cannot express how much this decision means for us, all our amazing supporters, and the thousands of pigs trapped inside Hogwood Farm.

The atrocious animal cruelty that my colleagues and I witnessed on Hogwood Farm will never be forgotten. Over the past two years, there has been complete inaction by industry bodies, with meaningless assurances that they are working to improve standards. But finally, with this undeniable evidence, animal welfare has come before profit.

Since our first investigation, the farm owners have invested thousands of pounds into increasing security at Hogwood. Rather than improve conditions for these poor animals, they invested in making it more difficult for the public to see the truth. But Viva! persevered and the final investigation showed all the assurances by industry bodies were false; Hogwood is an abysmal hell hole where cruelty is endemic.

Although we congratulate Tesco and Red Tractor on finally making the right decision, I can’t help but question why it is routinely left to vegan campaigning groups like Viva! to expose the abuse taking place on farms. And why it took three years of investigations for Tesco to act. Factory farming is an inherently cruel business and we hope that this exposé shows that assurance schemes like Red Tractor cannot be trusted. If you oppose animal cruelty, the best thing you can do is go vegan.

Finally, I want to thank all our fabulous supporters for campaigning with us for three years running; for springing into action at short notice after each investigation! Together, we have achieved this hard won and important victory. Congratulations everyone.”