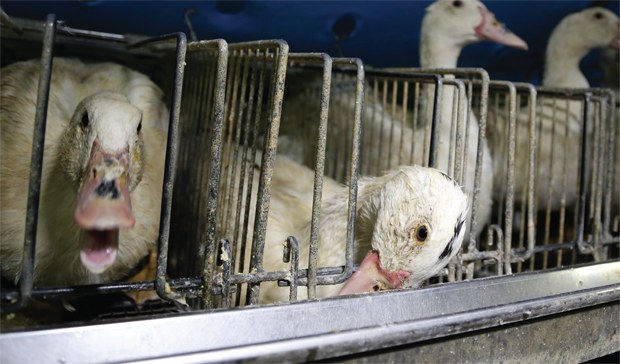 ANIMAL CHARITY VIVA! has written to celebrity chef Heston Blumenthal to congratulate him on the ethical decision to  remove foie-gras from all his menus – both in the UK and Australia. This comes after years of campaigning by Viva! to educate chefs and the public about the way foie-gras is produced.

Viva! supporters sent thousands of postcards and online messages to Mr Blumenthal reminding him that there is no such thing as ethical foie-gras – and anyone trying to produce it in the UK would be liable to find themselves prosecuted for animal cruelty. Viva! and its supporters also contacted British supermarket Waitrose, which – although it refuses to sell foie-gras on ethical grounds – was fronted by Mr Blumenthal. The success comes after the charity also persuaded online giant Amazon to dump foie-gras in 2013.

Viva! campaign manager, Justin Kerswell, says: “We are delighted that Heston has dumped foie-gras. It is an important ethical decision and other celebrity chefs should take note. We reminded him that there is no such thing as one bad apple in foie-gras production. It is an industry that is rotten to the core and the finished pâté is only possible with a cruelty so extreme that it would be illegal in the UK. It is the product of torture, with mostly caged ducks and geese feed so much grain that their livers expand by up to ten times their natural size.

“Viva! are calling on all other chefs across Britain to follow Heston’s lead and for the public to do their bit by not consuming foie-gras and boycott places that persist in selling it.”

Viva! has also launched an online petition asking people to lend their support to a ban of foie-gras into Britain: www.viva.org.uk/what-we-do/foie-gras-free-britain/make-britain-foie-gras-free-sign-petition

For more information about Viva!’s campaign against foie-gras, visit www.viva.org.uk/foiegras  or call 0117 944 1000.

Hi-res photos of foie-gras production are available on request from Viva!. Email Justin@viva.org.uk or phone 0117 944 1000.

Around 38 million birds are killed for foie-gras each year in France, with around a million dying during the force-feeding process. French foie-gras can only be sold as such if it is the product of ‘gavage’ (forced feeding). In France only male ducklings are used – females, who do not put on weight as quickly as males are typically destroyed at a day or two old, often by being dropped into electric mincers. In Spain, some birds raised for foie-gras are killed without stunning as it is believed it makes the foie-gras taste ‘better’. Some foie-gras birds in Hungary raised for foie-gras production suffer painful live plucking of their feathers for the down industry, before being force-fed and slaughtered. Britain is a major importer of foie-gras. More information here: www.viva.org.uk/resources/campaign-materials/fact-sheets/torture-tin-viva-foie-gras-fact-sheet

Amazon dumped foie-gras from their UK website after Viva! sent them a petition signed by over 10,000 supporters and customers. They took it off sale in October 2013.