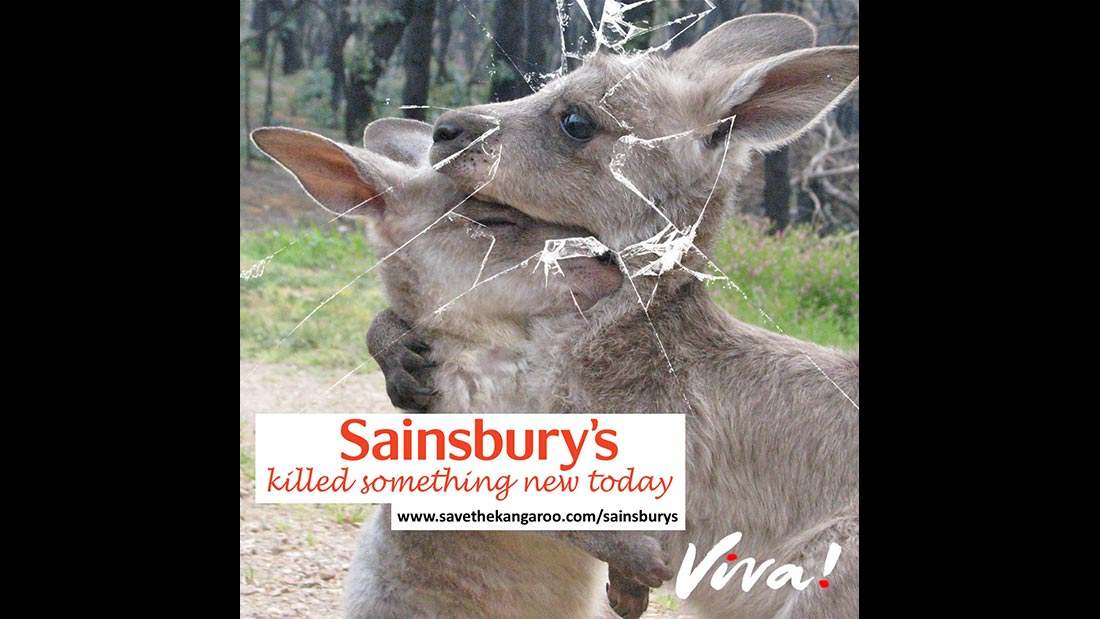 The appeal has attracted a huge amount of interest and gained coverage British national media The Telegraph, The Daily Mail, The Grocer and The Sun.

In a bid to get kangaroo meat on Britain’s dinner tables, Sainsbury’s began selling kangaroo burgers in over 500 of their stores in June 2017. The red meat product was being promoted as a ‘healthy’ and ‘low fat’ barbeque alternative to beef.

Experts from both UK and Australia have expressed their concerns about the health implications of consuming kangaroo meat and warned than it ‘could be riddled with pathogens’. Five years ago, independent testing had found dangerously high levels of Salmonella and E.coli in kangaroo meat bought from Australian supermarkets. In 2014, dog ‘treats’ made from kangaroo meat were withdrawn because of Salmonella contamination.

In addition to the potential health risks, Viva! warns of serious animal welfare issues surrounding the killing of kangaroos. In the UK it is a common misconception that kangaroos are farmed; when they are in fact completely wild animals. As such, their population can fluctuate massively – and can be especially impacted by factors that can be difficult to predict, such as drought (which is only expected to worsen because of climate change) and disease.

Baby kangaroos (joeys) are pulled from their dying mother’s pouch to be decapitated. Still dependent adolescents are shot and dumped or left to die from predation or hunger without the protection of their parents. Popularising and commercialising the meat of wild animals – whose populations are finite and unstable – is deeply irresponsible and potentially disastrous.

Whilst populations can build up in some areas they have plummeted in others. In 2016 alone there was 6.8 million kangaroos earmarked for slaughter. The death toll could increase significantly to fill supermarket freezers in the UK. According to the Australian Government’s own figures, since 2001 (compared to 2015) there has been an overall drop of 12,577,598 kangaroos in the areas where they are hunted.

The sale immediately sparked media controversy, particularly when British TV celebrity Joanna Lumley spoke out about the cruelty involved in the killing of the animals, she stated:

“If you hate the idea, as I do, of kangaroos and their young being killed and shipped to the UK so that customers here can eat less fat, why not try giving up meat altogether. If I can do it, anyone can!”

Animal welfare organisation Viva! have campaigned against the sale of kangaroo meat since the late 1990s. Recently they have also successfully stopped major British supermarkets Morrisson and Tesco from selling the meat.

Juliet Gellatley, founder and director of Viva!, explains her views on the issue: “We are delighted that Sainsbury’s have pulled kangaroo burgers off their shelves after little more than a week of selling them. What was being promoted as a little bit of summer fun to British consumers hid the brutal reality that the kangaroo trade drives the largest massacre of land based wild animals in the world today. We are committed to supporting Australian wildlife groups to end this this repugnant, merciless and thuggish trade.”

For details of the human health implications of eating kangaroo meat please see Viva!’s updated fact sheet: https://www.savethekangaroo.com/factsheet (it includes details of a brand new kangaroo butchering facility closed down because of health concerns this week)