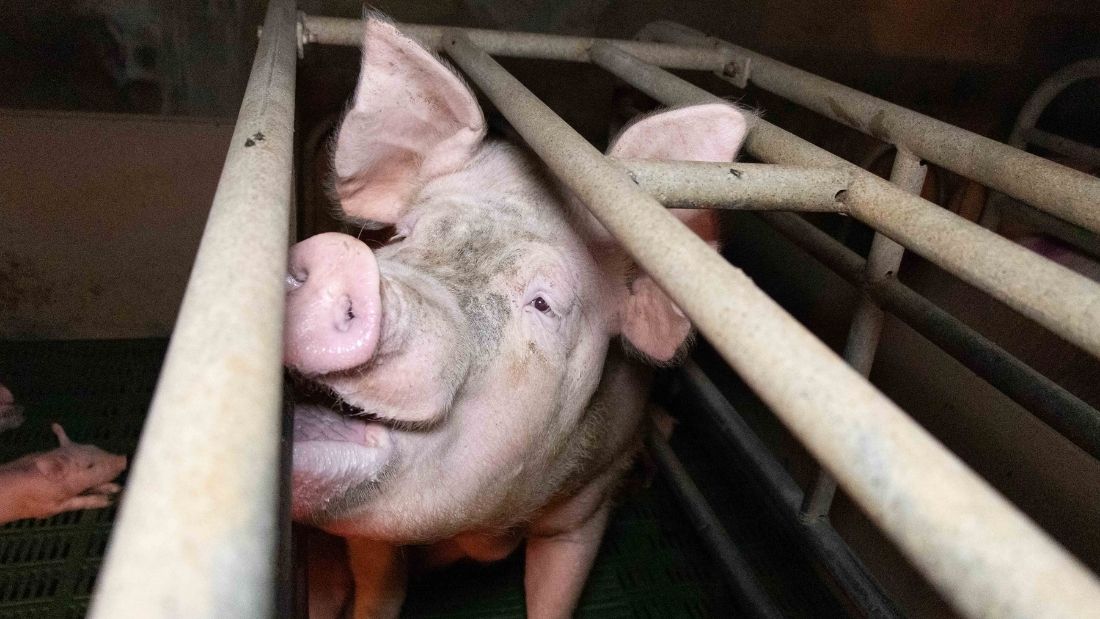 Flat House Farm, is owned by Elvidge Farms Ltd and until last week, was part of the consumer assurance scheme Red Tractor, which claims all of their farmers’ ‘animals have been well cared for’[1].

After the investigation, Viva! Campaigns submitted their findings to Red Tractor who announced they were ‘appalled’ by the footage. Flat House Farm were subsequently removed from the assurance scheme with immediate effect [2].

Flat House Farm is a farrow-to-finish farm housing around 8,000 pigs and 800 breeding sows.

Undercover investigators captured a catalogue of disturbing scenes and used hidden cameras to film some of the farm’s handling practices.

The team discovered animals had a range of serious ailments causing acute pain – including bleeding hernias, deformed trotters, prolapses, rectal strictures and pot bellies. Other animals were covered in lacerations and grotesque bites, injuries inflicted on them by other pigs who are driven to insanity by the barren environment.

Viva!’s director filmed young animals left to die in cells, writhing in pain with their eyes rolling in their socket.

There were jaw bones and bodies piled up left in various locations across the site, which goes against government guidelines:

“Bins can be used a temporary store for fallen stock, especially during times of high mortality. Your bins must be kept clean and disinfected, must have lids and be leakproof [5].”

One particularly sick animal, who was severely bloated, had been left in the walkway, with no access to food or water, other than that that was dripping down the walls during a rainy evening.

This is in clear breach of UK government guidelines which state:

“Drinking water must be continuously available along with feeding facilities which can easily be accessed by all pigs”[3].

Vice lesions such as flank, tail and ear biting were found to be widespread on the farm and do not appear to be effectively managed. Pigs suffering with acute malnutrition and severe enteritis are experiencing long-term health conditions that take time to develop and indicate that animals have not received adequate veterinary care,  causing unnecessary suffering for the animals.

The government’s code of practice for pig welfare clearly states:

“Any animals which appear to be ill or injured must be cared for appropriately and without delay; where they do not respond to such care, veterinary advice must be obtained as soon as possible [3].”

One of the most distressing scenes captured by Viva! Campaigns shows a farm worker ‘knocking’ young piglets – killing them by slamming their tiny heads onto the metal bars of their mother’s metal cage. A brutally cruel act which is followed by the worker dumping the bodies aside and saying “I hate doing this”.

During each pregnancy, sows at Flat House Farm are confined to a barbaric farrowing crate for five weeks at a time. Four of which are after she gives birth, restricting her natural maternal instincts to physically bond with her young. These cages are widely used on British factory farms and are entirely legal [4].

In one of the sheds housing the farm’s ‘breeding stock’ an excruciatingly loud radio plays throughout the night, forcing the sows to endure additional unnecessary stress.

Investigators discovered one seriously lame sow and a second writhing on the floor, unable to stand and clearly dying in a pile of her own waste.

These conditions are in total breach of pig care guidelines, which explain:

“Pigs must have a clean, comfortable and adequately drained place in which it can rest [3].’

Flat House Farm is home to hundreds of female pigs who are routinely impregnated and forced to birth countless litters of piglets. This is standard farming practice.

Dismembered body parts were found on every visit, as well as numerous dead piglets alongside confined sows. Hidden camera footage from the crates captured cats picking off sick piglets, eating them alive and dragging their limp bodies into the walkways to feast.

These practices are in complete violation of the government’s guidance on how to handle ‘fallen stock’, which states:

‘You must ensure that animals and birds cannot access the carcase.’ [5]

Workers were also captured carrying out routine mutilations. Each newborn piglet is pulled from their stall and dropped into a metal shopping trolley before having their tails and teeth clipped with pliers – all without pain relief. These cruel acts are supposed to prevent tail biting, a behavior that manifests from distress and lack of stimulation.

On factory farms like Flat House, animals are crammed together in appalling conditions, allowing for infections to spread and mutate with ease.

“We were very concerned about the footage, which we were sent last week, in particular it showed a number of pigs who appeared to be suffering with severe injuries and injuries requiring urgent treatment, underweight pigs, poor carcass disposal practices and stock-keepers striking pigs.

For biosecurity reasons, animals such as feral or domestic cats should not have access to the pig accommodation.

Sadly, the use of farrowing crates on pig farms is legal. We would really like to see farrowing crates phased out because they do not meet the welfare needs of the sow, preventing her from being able to turn around and severely restricting her natural nest building behaviour.”

“Viva!’s investigation contains some of the most disturbing images I have ever seen. It is clear the animals on this farm are suffering. If this is the Red Tractor standard, then consumers are being misled. We cannot allow farms like this to operate in the UK.“

“I witnessed suffering that I truly believe almost everyone in Britain would be disturbed and upset by. In cells covered in excreta, I filmed a pig of about three months old left on her side, writhing in pain with her eyes rolling in their sockets. Another had been left to starve to death. It is appalling that this farm was Red Tractor approved and trusted to supply the nation’s food.

Our team also witnessed appalling conditions in this investigation, documenting the systematic abuse of farmed pigs, whose short lives are filled with nothing but misery and pain. Animals are left to suffer as a result of poor hygiene, care and disregard for their welfare – all for the sake of red meat which causes multiple human health problems.

This investigation reiterates the fact that supermarket welfare claims and regulatory bodies such as Red Tractor are nothing but a façade for the horrendous, brutal and cruel reality of intensive factory farming in this country.

What our investigators found at Flat House Farm are typical of what is permitted by government and retailers. I think British consumers will be disgusted to see the conditions on this farm.

Not only do factory farms raise serious welfare concerns, they also create an ideal environment for mutating viruses and antibiotic-resistant superbugs. In fact, most governments thought the next pandemic would be caused by an avian influenza (bird flu) virus emerging from poultry or pigs.

Our relationship with animals can no longer be just focussed on exploitation, the way meat is produced is now considered to be a global threat. It’s not just a case of banning wet markets, although that can’t come soon enough. We need to end factory farming before it ends us and are calling on consumers to choose vegan.”

Video and photos from the investigation can be found here: https://www.flickr.com/gp/vivacampaigns/P7kZ0f

The farm is owned and operated by Elvidge Farms Ltd.

The farm has been reported to the RSPCA, Trading Standards, APHA and Red Tractor.

We are appalled by the images in the footage, protecting animal health and welfare is one of our top priorities. Red Tractor requires all members to meet every standard, every day and take any allegations of breaches seriously. As of last night, the Red Tractor Certification was suspended with immediate effect.