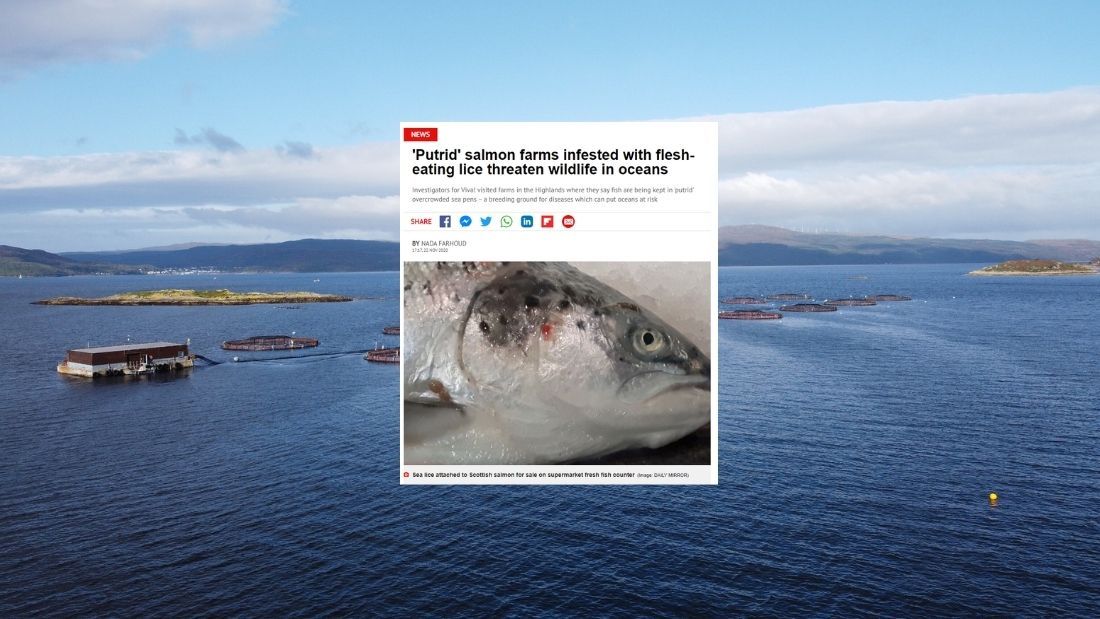 As featured as a Daily Mirror exclusive. 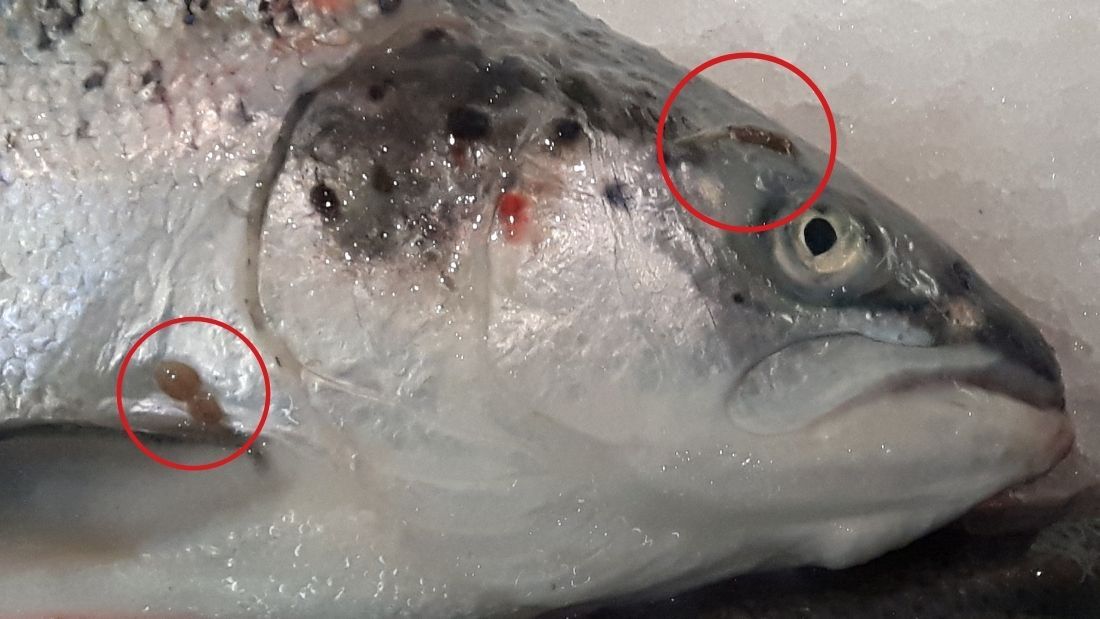 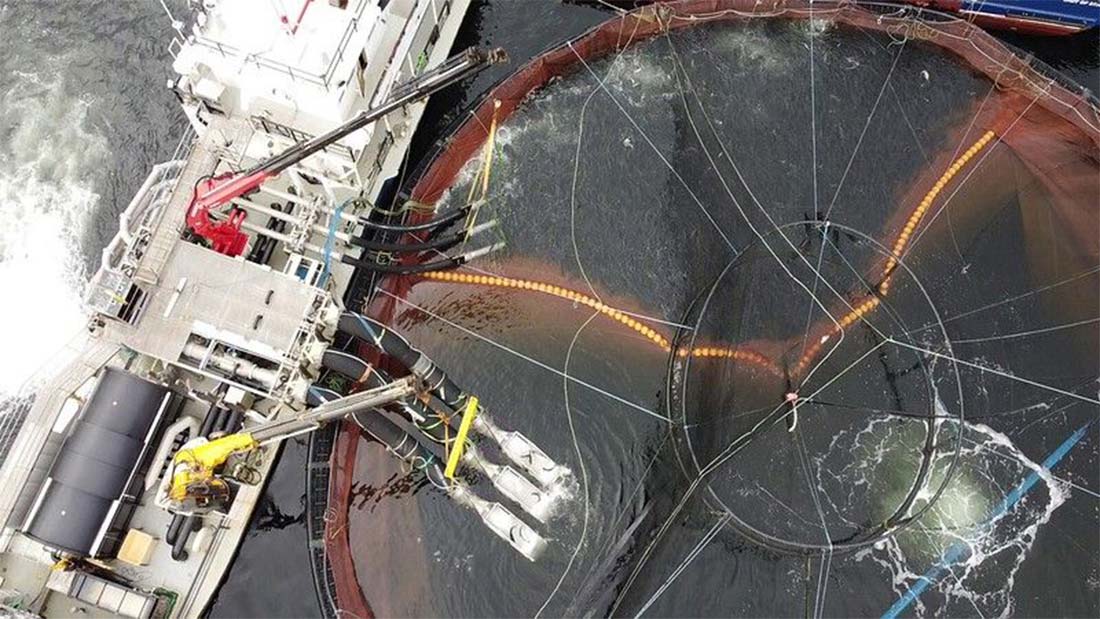 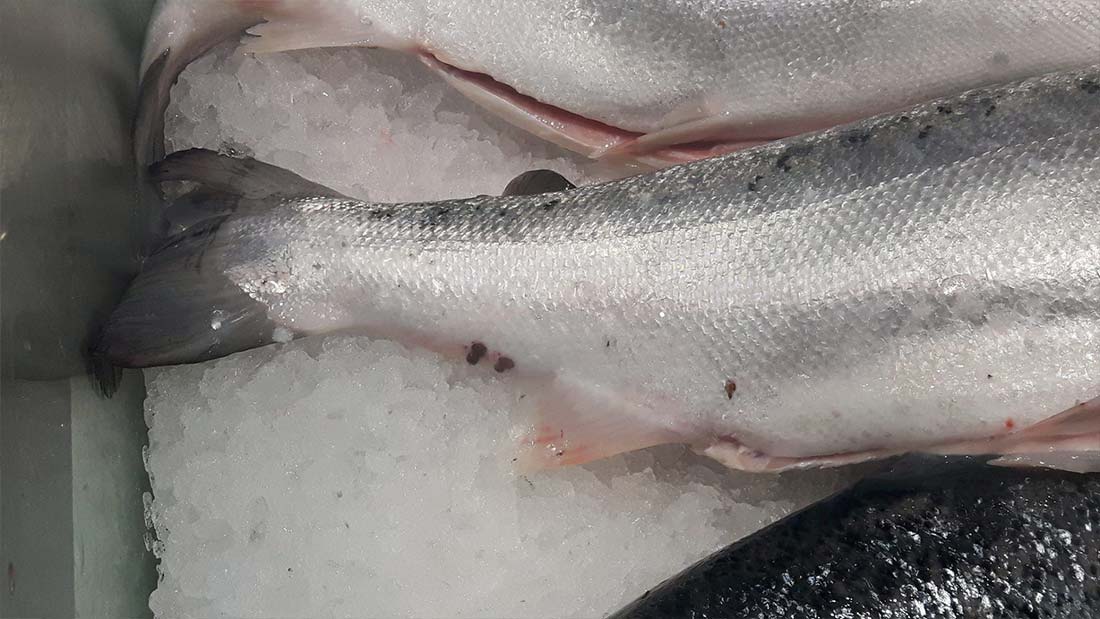 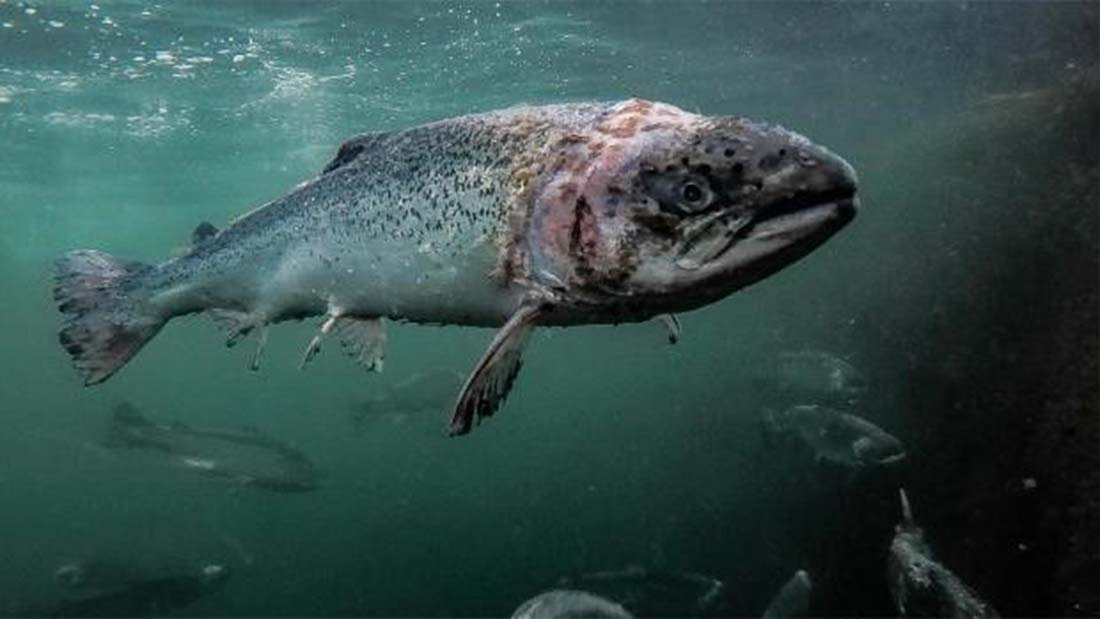 Shocking footage has been released by Viva! Campaigns following their recent investigation into Scottish salmon farming. In September 2020 undercover investigators visited a number of farms in the Highlands. There, they discovered a hidden industry that is pouring tonnes of formaldehyde in Lochs and which forces salmon to live in overcrowded pens where they are being eaten alive by sea lice.

Farmed salmon are kept in overcrowded sea pens which provide a breeding ground for sea lice. In severe cases lice consume the flesh around the fish’s’ head and neck area right down to the bone, causing immense suffering and stress for the fish.

Many consumers will be not only appalled at the conditions these creatures are forced to endure, but also that the salmon they are buying is intensively farmed.

Campaigners have been raising concerns for years, yet this abhorrent industry continues to thrive – generating millions of pounds revenue annually.

Sea pens are littered across the Highlands ​and in clear view of the public, but what they hide from the eyes of the consumer are the shocking conditions beneath the surface.

Overcrowding and infestations of lice


Whilst adult wild salmon are well adapted to coping with the occasional sea louse – a parasite that naturally occurs in the sea – the intensification of salmon farming has led to fundamental changes in the density and occurrence of lice in coastal waters. Although one or two lice per salmon may not sound like a real threat, when this is multiplied by hundreds of thousands within a sea cage, the consequences are catastrophic.

Sea lice reproduce rampantly, feeding on skin, mucus and blood, which produces white ‘death crowns’ of exposed flesh on the salmon. Clearly suffering, the infected fish are regularly seen jumping up to 30 centimetres in the air and skimming along the water surface with their tails in attempts to dislodge the bugs. Large numbers of these lice can be devastating, causing skin lesions, loss of scales, secondary infection and ultimately death.

Devastatingly, huge numbers of juvenile sea lice also escape to the local marine environment, causing significant damage to wild salmon and sea trout smolts, whose fragile skin is not yet adapted to coping with parasites on this level.

The Scottish Salmon Producers Organisation claims ‘Our salmon are reared with their health and welfare as our top priority.’


Sea lice infestations are so severe that dedicated boats patrol the farms using non-medicinal lice treatments to ‘clean’ the salmon – using either hydrolicer or thermolicers techniques.  One of these boats was found to be operating in a designated Special Area of Conservation and Marine Protected Area famous for its rare flame shell bed.

During a hydrolicer treatment, the fish are drawn into a brutal ‘washing machine’ type device through fish pumps. This system includes water separating units and a filtration system to ensure that all the lice can be removed from the water and destroyed.


Similarly to hydrolicer treatments, thermolicers herd up salmon and pump them up from the sea pen through a tube. Exiting the tubes the fish pass through a tank of warm water, before being ejected back out into the opposite side of the sea cage. The water is heated up to 34 degrees, which can be 20 degrees above the seawater temperature. It takes around 25-30 seconds for the fish to pass through the entire ‘processing loop’.

Sea lice are sensitive to sudden changes in water temperature and so die and fall off once the salmon hit the heated water. They are then collected and destroyed.

Recent scientific research has found that salmon exposed to water temperatures above 28 degrees centigrade behaved as if they were in pain. Marine and veterinary researchers in Norway observed fish swimming faster, crashing into tank walls and shaking their heads.

As well as the above methods, the industry also uses lumpfish – small cleaner fish – who are placed inside the cages to feed on sea lice. This practice cannot be effective as the use of the delousing boats are still required. Living conditions for the lumpfish are also poor as they are forced to share murky disease-ridden waters with the thousands of salmon swimming monotonously in the sea cages.

Dr Lynne Sneddon, a specialist in aquatic life forms, has conducted research proving fish have nerve endings and are capable of feeling pain which are “strikingly similar to those found in humans”.

She also writes that these lice treatment methods result in “harm and poor welfare and should not be employed within the Atlantic salmon farming industry”.

The Scottish salmon industry has worked hard to build a reputation of clear, pristine waters with salmon happily jumping – the reality is  much more miserable.

Consumers will be outraged to discover the conditions in which Scottish farmed salmon are forced to endure. Farmed salmon spend an average of two years in murky and overcrowded sea pens before being ‘harvested’ for food.  During this time they are likely infested with flesh eating sea lice, brutally thrown into  delousing torture-chambers and experience serious stress as a result. Not what anyone would consider ‘high welfare’.

As more consumers become aware of the serious implications of overfishing, fish farming has pitched itself as a more sustainable alternative. This just isn’t the case. Thousands of fish crammed into filthy sea cages, riddled with lice and disease – this is isn’t just cruel it is breeding ground for bacteria and causes widespread suffering.

One freshwater loch  investigators visited, Loch Tralaig, has been at the centre of controversy regarding the use of formaldehyde to control fungus, parasites, and disease. Loch Tralaig is home to the RSPCA Assured Loch Tralaig fish farm and owned by Kames Fish Farming Ltd. A Freedom of Information request last year to the Scottish Environment Protection Agency (SEPA) revealed more than 22 tonnes of formaldehyde had been poured into cages at 12 fish farms across Scotland between April and December 2019.

“We’re led to believe that aquaculture is the sustainable solution to overfishing, but its rapid intensification has brought with it the same problems we have with factory farms on land. The putrid conditions in which farmed fish are reared creates a breeding ground for disease, that not only causes serious animal welfare issues but also delivers widespread habitat destruction, water pollution and the development of life-threatening drug-resistant superbugs. It’s wrong to think that fish do not suffer when it’s been scientifically proven time and time again that they do. To avoid contributing to their pain the only solution is to leave them off our plates and choose vegan.”