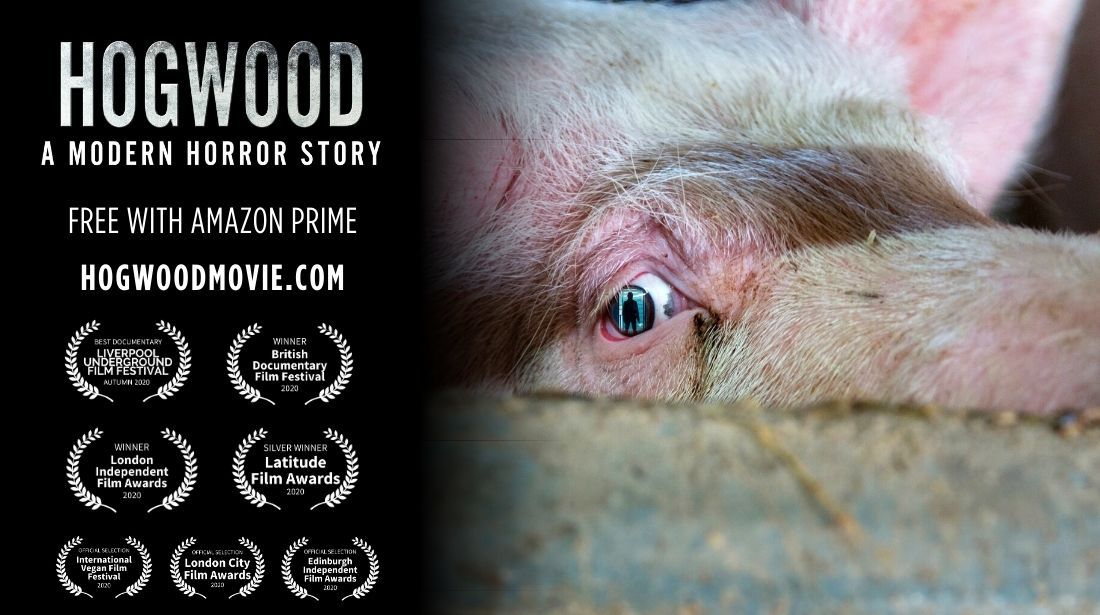 HOGWOOD: a modern horror story tells the disturbing tale of Hogwood Farm and how it came to be one of the most infamous pig farms in the UK. It weaves a chilling tale of negligence and inaction, interspersed with powerful expert interviews from the fields of environmental science, health, veterinary care, and vegan activism.

“To paraphrase Werner Herzog, a filmmaker must not be a fly on the wall, but a hornet that stings. Hogwood uncovers some brutal truths of animal farming. It is as harrowing as it is vital.”

The film has gained international recognition from film reviewers, has been rated five stars on one of the biggest streaming platforms Amazon Prime, and has won multiple awards for exceptional documentary film-making, including the Wild Animal Award from the British Documentary Film Festival.

“HOGWOOD handled an incredibly disturbing topic very well. It left a lasting impact on our judges and certainly changed some of our staff’s food habits as a result. We would urge everyone to educate themselves on factory farming and start by watching HOGWOOD.”

“I am thrilled that HOGWOOD has been awarded the Best Documentary Award at the Liverpool Underground Film Festival. This film encapsulates so much about Viva! – I am proud of our brilliant investigations team that consistently brings together powerful footage and of our director, Juliet, who infuses her own passion into the horror. HOGWOOD is more than just a film – it exposes the modern horror stories taking place each day, hidden away in the idyllic British countryside. The public has a right to see what goes on behind the factory farm walls.”

For more information or to review HOGWOOD please contact Roisin McAuley, Head of Communications, on roisin@viva.org.uk

About the Liverpool Underground Film Festival

The Liverpool Underground Film Festival seeks to showcase daring, unique, and entertaining independent films that transgress convention while challenging complacent audience expectations. We are committed to supporting filmmakers working outside of established industry infrastructures by providing a platform for exhibition and critical discussion, while fostering an alternative, international community based around independent and experimental cinema.