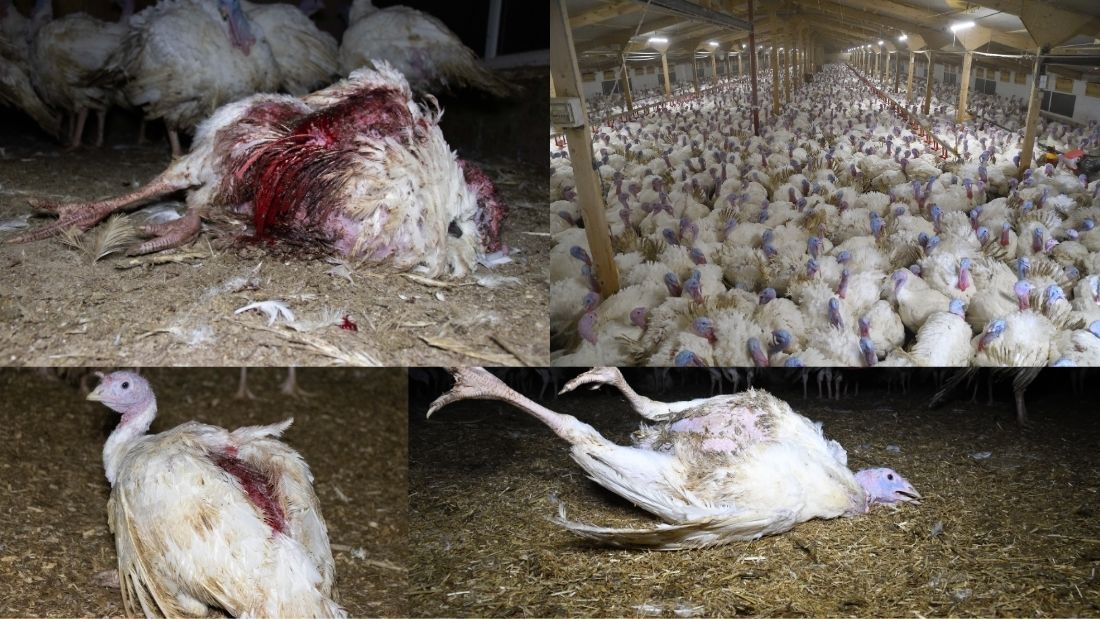 As featured in The Independent.

Viva! have released footage from an undercover investigation into three British intensive Red Tractor turkey farms  – East Farm, Norfolk and two Gloucestershire-based farms Clearwell and Strawberry Hill. East Farm is operated by UK poultry giant Gressingham, who annually produce over eight million turkeys, ducks and chickens – their produce can be found in all major supermarkets [1].  Clearwell Farm is owned by Hay Farms and Strawberry Hill is owned by JM & ME Harrington, both producing birds for Avara Food. As one of the UK’s biggest food producers, Avara Food supplies household names like Tesco, Sainsbury’s, ASDA and Morrisons [2].

This investigation reveals shocking scenes of suffering and cruelty with a total disregard for animal welfare.

Forced to live Inside cramped sheds, these turkeys never see the light of day and are mechanically fed, watered and continually weighed to ensure maximum growth and profit. The rate at which these birds grow is unnaturally fast and frequently leads to leg disorders, joint degeneration and heart disease.. During this investigation  birds were found to be so overweight they struggled to stand after falling over –  resulting in problems accessing water and food.

Hidden cameras placed at Strawberry Hill Farm revealed birds confined to barren windowless sheds and subjected to continuous artificial lighting without periods of darkness, which are supposed to last at least eight hours, for over three months. Cameras filmed for three days straight and the only time the lights were turned off was during the catching process to keep them calm during stressful loading.

Overcrowding also appeared to be a problem at this farm and in breach of government standards which state the turkeys should be ‘allow[ed] enough room to be able to move about freely and to spread their wings’.

At all farms, investigators found a concerning number of birds suffering from disturbing injuries, likely due to a lack of appropriate environmental enrichment. Turkeys are naturally inquisitive and explore their environment and investigate new objects by pecking. Therefore, it is recommended that turkey farms should provide suitable forms of environmental enrichment, to reduce stress and pecking of other birds. However, dying birds were found with devastatingly bloody wounds caused by other birds pecking out their feathers, which appeared to have gone untreated for a considerable time. These conditions are in contradiction to Avara Food’s animal welfare policy which claims ‘Our birds would rather peck at the drinkers, feeders, or other pecking objects than each other.”

A number of turkeys at Strawberry Hill Farm were also found with broken wings – one with a gruesome wing bone significantly protruding from the injury. This particular breakage would have been difficult to miss in a ‘welfare check’ and at the time of breakage would have  been excruciatingly painful. This injury appeared to have gone untreated for a considerable amount of time as the wound had healed over.

Red tractor states “The health and welfare of birds must be checked regularly (Flock inspection is carried out at least twice daily / stockmen walk within 3m of every bird and encourage them to move)”.  This investigation observed a worker at Strawberry Hill Farm making just one health and welfare check per day. Similarly at Clearwell Farm, a worker was filmed making one thorough check in the morning and following up with a quick opening of the door in the evening. These instances meet only the basic government guidelines rather than Red Tractor standards. Although it’s likely workers did walk within 3m of every bird, this is an insufficient distance to ensure each bird is ‘well’.

Birds were also found to be suffering from respiratory problems, as well as deformed legs and feet, all of these are common issues found in intensively farmed birds due to high levels of ammonia from excrement on the farm floor.

Workers brutally kicking helpless birds at a mere 132 days old, the turkeys at Strawberry Hill Farm were filmed being caught ready for slaughter, forced into crates and then transported to a slaughterhouse. Investigators filmed workers  during the catching process and recorded birds being ruthlessly kicked more than 218 times (a conservative estimate) while being herded.

Footage from Strawberry Hill Farm documents many birds being  carelessly trapped , with their wings caught in the transport crates. Workers repeatedly failed to remove the trappages before loaded, causing unnecessary suffering.

This is in clear violation of Red tractor guidelines which states “Staff must ensure that no part of the bird has become trapped by the crate or module; The nominated member of the catching team is responsible for ensuring trappages do not occur; The driver is responsible to check for bird trappages.”

As well as the countless welfare issues discovered on these farms and the countless others Viva! have exposed, factory farming poses a serious risk to public health. The cramped, unsanitary conditions on these farms are a breeding ground for disease. As we continue to navigate our way through a global pandemic, environments such as factory farms are a serious risk to human health.

Viva!’s findings were reported to Trading Standards who said:  “Trading Standards take animal health and welfare matters seriously and we will be looking in to the incident you have made us aware of.”

Veterinary expert Professor Andrew Knight offers his thoughts on the investigation’s findings: ”The welfare of these turkeys was compromised in several ways. The turkeys were very tightly packed together in a barren environment. With little else to do, the innate urge to peck and explore can lead to feather pecking by more dominant birds. Some turkeys showed severe signs of feather loss and injury. Particularly disturbing was a turkey with feather loss and a severe, raw wound, over most of its back. This bird was also unable to stand or easily move. Some others were similarly affected. One was literally thrashing around on its back, unable to right itself. These birds were clearly severely lame or injured, and in need of veterinary care. Most of the birds also had dirty feathers from being forced to lie on dirty flooring.

Lex Rigby, Viva! Head of Investigations discusses the investigation: “The UK supposedly prides itself on having some of the ‘highest animal welfare standards in the world’, yet the total disregard for the Animal Welfare Act’s five basic freedoms on these farms is quite simply disgusting. Once again our team witnessed appalling conditions, documenting the systematic abuse of farmed turkeys, whose miserably shorts lives are filled with nothing but pain, discomfort and fear – all for the sake of Christmas dinner.

The government and industry bodies alike are failing in their duty of care and what our investigation reiterates is the fact that regulatory bodies such as Red Tractor are nothing but a façade for the horrendous, brutal and cruel reality of intensive factory farming in this country. Not only do these farms cause severe animal suffering but they also create a hotbed of disease that leads to devastating pandemics like Covid-19.

For interviews or quotes please contact Siobhan Dolan on 07969 306 081 or email siobhan@viva.org.uk.