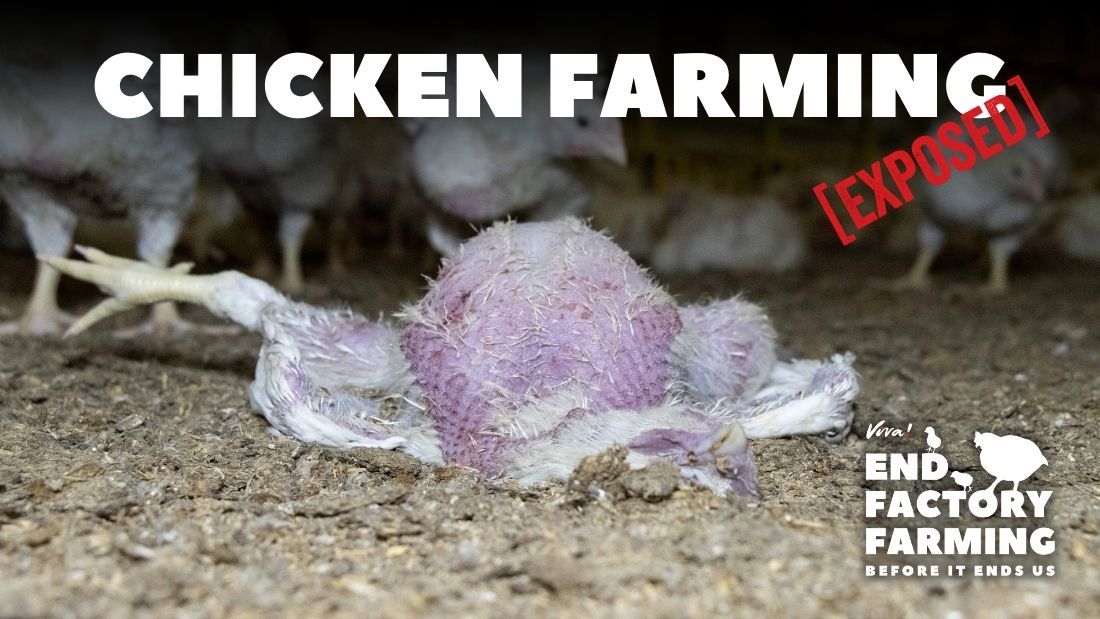 Viva! Campaigns has released a new damning exposé – featured exclusively in The Independent – revealing the brutal reality of the broiler chicken (birds reared for meat) industry. The investigation focuses on the UK’s three largest poultry producers, approved by Red Tractor, which supply best-known brands including M&S, Tesco, ASDA and Waitrose.

Across the beautiful British countryside an increasing number of industrial-scale chicken farms are appearing, rearing birds in abhorrent conditions for our country’s leading supermarkets, restaurants and food outlets. Not only are these factory farms causing misery and suffering to millions of birds each week, but they are also posing a significant risk to public health and threatening our planet.

At all three farms in this investigation, the life of a ‘meat chicken’ was found to be short and brutal – from birth to death in just five to six weeks. Selectively bred to gain weight quickly, the birds were crammed into factory-style units in their tens of thousands, living on their own excrement with little to no enrichment. Many of them wouldn’t have seen the light of day until packed on a truck and sent to slaughter at a fraction of their natural life cycle.

Investigative footage released by Viva! shows around 30,000 birds crammed into one of 15 sheds at Haywood Poultry Unit, scrambling over each other – desperate for space.

The average lifespan of a broiler chicken is 42-days, although the vast majority of fast-growing breeds reach slaughter-weight between 30 and 38 days old. As these young animals pile on the weight, their underdeveloped bones are unable to support them and many end up crippled or lame. Haywood Poultry Farm is no exception to this. Undercover footage shows abnormally large birds at 38-days old collapsing, their legs too weak to hold their grotesquely overweight bodies. Birds which collapse like this are often unable to access food or water points, and as a result die from starvation or dehydration.

The damning footage also shows dead birds trodden into the ground and covered with litter, which appear to have been left for some time – which is unsurprising given the sheer number of birds in the shed and only two brief ‘welfare checks’ a day required to meet minimum standard. Common causes of death on these farms are heart attacks and respiratory distress, brought on by the birds’ rapid growth.

Sick, injured or weak birds were generally left to unnecessarily suffer, rather than treated in a hospital pen or humanely cull as per Defra guidelines. Factory farms such as Haywood create an ideal breeding ground for disease and bacteria, posing a huge health risk to other animals living in close proximity and humans who consume their flesh.

Hook 2 Sisters’ website proudly states their ‘customers include Aldi, Asda, Co-op, KFC, Lidl, Marks & Spencer, Morrison’s, Sainsbury’s, Tesco and Waitrose’. They produce around one third of all poultry products eaten every day in the UK and process 10.4 million birds a week in the UK and Europe.

At Churchinford Farm, investigators discovered numerous dead and decaying birds – some of which were being pecked by others due to a lack of adequate environmental enrichment. Others were found collapsed on the ammonia-rich litter that covers the shed floor with painful hock burns marking their raw skin.

Feather-pecking was also observed at this farm, a condition whereby birds continually peck each other due to boredom or frustration. According to British animal welfare guidelines ‘providing birds with straw bales, perches, low barriers and pecking objects, can significantly increase the amount of time the birds spend standing, walking and running; reduce the amount of time birds spend sitting and resting; and reduce injurious pecking and the number of aggressive interactions between birds. At Churchinford Farm a small piece of a wood on a chain was provided as a means of environmental enrichment – a wholly inadequate interpretation of the recommendation.

Investigators discovered other birds with what appeared to be respiratory problems, collapsed and panting heavily – another example of the severe health issues caused by factory farming conditions.

Moy Park have been exposed in recent years for their shocking lack of animal welfare standards and this investigation demonstrates that they have failed to improve. They are owned by Pilgrim’s Pride, an American company majority-owned by Brazilian meat giant JBS, who have been repeatedly accused of being directly responsible for deforestation in the Amazon.

This investigation demonstrates that there are still serious animal welfare concerns at their farms. Overbrook Farm has 14 sheds, each of which are crammed full of birds as far as the eye can see.

Evidence captured at Overbrook Farm revealed a high number of bald birds, most likely as a result of aggressive feather-pecking. Similarly, to the other farms featured in this investigation, the footage taken from this site shows countless dead birds, left to rot amongst the living.

Moy Park’s website boasts they “consider it a moral duty to prevent the unnecessary suffering of animals.”
Viva!’s Head of Investigations Lex Rigby speaks about the investigation:

“Our insatiable desire for cheap chicken has led to an alarming rise in US-style mega-farms that prioritise profit over welfare. Vast industrial rearing facilities, dominated by a handful of private businesses, scourge the countryside causing unnecessary pain and suffering as well as damaging our health and the environment.

Every year Britain slaughters over one billion chickens for meat, all of which will have experienced a miserably short life in severely overcrowded units. Clever marketing tactics continue to mislead consumers into believing the UK has some of the highest animal welfare standards in the world, but the reality is a far cry from what we see in the adverts.

The farms in our investigation supply major supermarkets, restaurants and food outlets and are considered industry standard. Sadly, none of the conditions our investigators filmed are illegal – which makes the findings even more disturbing. Now that there are so many more plant-based chicken alternatives widely available, there couldn’t be a better time to choose compassion and go vegan instead”.

Andrew Knight, a Veterinary Professor of Animal Welfare, offers his thoughts on the findings:

“This investigation footage is highly disturbing and animals are clearly suffering on these farms.

I am concerned to see examples of cannibalism, feather-pecking and birds suffering severe feather-loss. These issues are commonplace in factory farms where birds live in cramped, overcrowded conditions which cause anxiety and stress.

The footage shows birds collapsed, struggling to walk and with splayed legs. These conditions are usually as result of the bird’s inability to carry their own bodyweight. Broilers chickens are selectively bred to speed up growth. They often struggle to walk due to severe lameness and excessive body weight”.