Home » Materials » Resources » Where did bird flu come from?

Where did bird flu come from? 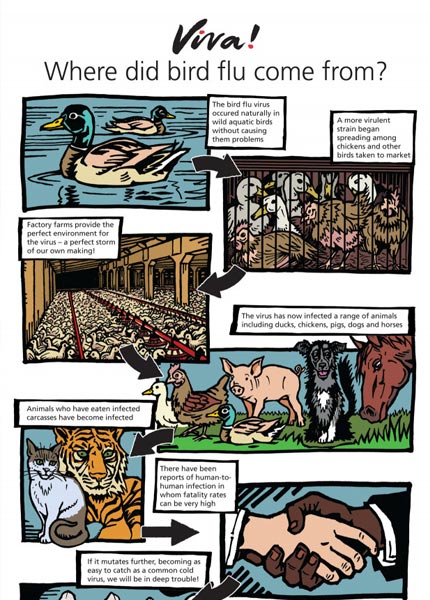 Bird flu – as avian influenza has become known – came to international attention in 1997 when it spread through live-poultry markets in Hong Kong and for the first time infected people, resulting in six deaths. Do you know where it came from, what roles factory farms are playing and just how dangerous the situation really is?

Until relatively recently, the bird flu virus co-existed in aquatic birds spreading from bird to bird in water without harming them. When people began taking birds to market, the virus was unable to spread and a new, more virulent virus emerged, one that could spread more easily in the faeces and secretions from the birds. Large-scale factory farms now provide the perfect environment for a mutating virus – closed, dimly lit (UV can harm viruses), crowded, stressful and unsanitary conditions – a perfect storm of our own making!

The virus has become able to jump species and has infected a range of animals including humans, in whom fatality rates can be very high. While it is still relatively difficult to catch, there have been reports of human-to-human infection and if it mutates further, becoming as easy to catch as a common cold virus, we will be in deep trouble. One way to take control of the situation would be for huge numbers of people to stop eating poultry, pigs and other animals and remove the viral reservoir of factory-farms.

This post has been categorised in: All Print Materials, Wallcharts