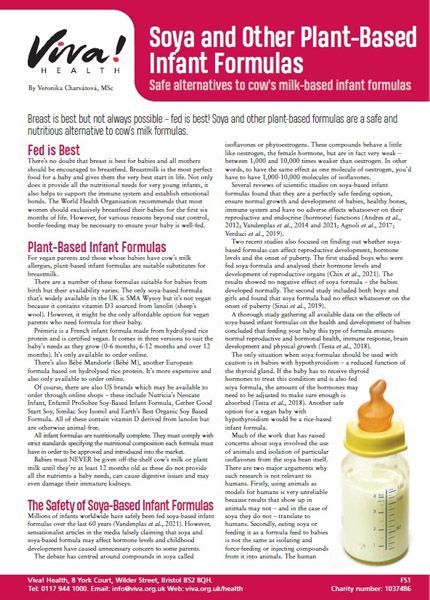 Breast is best but not always possible – fed is best! Soya and other plant-based formulas are a safe and nutritious alternative to cow’s milk formulas.

There’s no doubt that breast is best for babies and all mothers should be encouraged to breastfeed. Breastmilk is the most perfect food for a baby and gives them the very best start in life. Not only does it provide all the nutritional needs for very young infants, it also helps to support the immune system and establish emotional bonds. The World Health Organisation recommends that most women should exclusively breastfeed their babies for the first six months of life. However, for various reasons beyond our control, bottle-feeding may be necessary to ensure your baby is well-fed.

For vegan parents and those whose babies have cow’s milk allergies, plant-based infant formulas are suitable substitutes for breastmilk.

There are a number of these formulas suitable for babies from birth but their availability varies. The only soya-based formula that’s widely available in the UK is SMA Wysoy but it’s not vegan because it contains vitamin D3 sourced from lanolin (sheep’s wool). However, it might be the only affordable option for vegan
parents who need formula for their baby.

Prémiriz is a French infant formula made from hydrolysed rice protein and is certified vegan. It comes in three versions to suit the baby’s needs as they grow (0-6 months, 6-12 months and over 12 months). It’s only available to order online.

Of course, there are also US brands which may be available to order through online shops – these include Nutricia’s Neocate Infant, Enfamil ProSobee Soy-Based Infant Formula, Gerber Good Start Soy, Similac Soy Isomil and Earth’s Best Organic Soy Based Formula. All of these contain vitamin D derived from lanolin but are otherwise animal-free.

All infant formulas are nutritionally complete. They must comply with strict standards specifying the nutritional composition each formula must have in order to be approved and introduced into the market.

Babies must NEVER be given off-the-shelf cow’s milk or plant milk until they’re at least 12 months old as these do not provide all the nutrients a baby needs, can cause digestive issues and may even damage their immature kidneys.

The Safety of Soya-Based Infant Formulas

Millions of infants worldwide have safely been fed soya-based infant formulas over the last 60 years (Vandenplas et al., 2021). However, sensationalist articles in the media falsely claiming that soya and
soya-based formula may affect hormone levels and childhood development have caused unnecessary concern to some parents.

The debate has centred around compounds in soya called isoflavones or phytoestrogens. These compounds behave a little like oestrogen, the female hormone, but are in fact very weak – between 1,000 and 10,000 times weaker than oestrogen. In other words, to have the same effect as one molecule of  oestrogen, you’d have to have 1,000-10,000 molecules of isoflavones.

Two recent studies also focused on finding out whether soya-based formulas can affect reproductive development, hormone levels and the onset of puberty. The first studied boys who were fed soya-formula and analysed their hormone levels and development of reproductive organs (Chin et al., 2021). The
results showed no negative effect of soya formula – the babies developed normally. The second study included both boys and girls and found that soya formula had no effect whatsoever on the onset of puberty (Sinai et al., 2019).

A thorough study gathering all available data on the effects of soya-based infant formulas on the health and development of babies concluded that feeding your baby this type of formula ensures normal reproductive and hormonal health, immune response, brain development and physical growth (Testa et al., 2018).

The only situation when soya formulas should be used with caution is in babies with hypothyroidism – a reduced function of the thyroid gland. If the baby has to receive thyroid hormones to treat this condition and is also fed soya formula, the amount of the hormones may need to be adjusted to make sure enough is
absorbed (Testa et al., 2018). Another safe option for a vegan baby with hypothyroidism would be a rice-based infant formula.

Much of the work that has raised concerns about soya involved the use of animals and isolation of particular isoflavones from the soya bean itself. There are two major arguments why such research is not relevant to humans. Firstly, using animals as models for humans is very unreliable because results that show up in animals may not – and in the case of soya they do not – translate to humans. Secondly, eating soya or feeding it as a formula feed to babies is not the same as isolating and force-feeding or injecting compounds from it into animals. The human body deactivates a large portion of the compounds that are eaten, converts them to another form or doesn’t even absorb them (Testa et al., 2018).

Against the background of a small number of animal-based studies, a large amount of human studies show that soya-based infant formulas are a safe feeding option. A recent study reviewed 417 reports exploring the safety of soya and isoflavone consumption (Messina et al., 2021). This most comprehensive
study to date concluded that soya does not disrupt the body’s hormonal (endocrine) system.

The Government’s Committee on Toxicity of Chemicals in Food, Consumer Products and the  Environment (COT) published a report in 2013 on phytoestrogens in infant diets. While they acknowledged all the studies showing that soya-based formulas are safe and have no adverse effects on babies, they also took into consideration the animal studies that skew the picture. As a result, they concluded that soya-based formulas are safe but should only be used when recommended by a medical professional. However, since 2013, many more studies supporting the safety of soya formulas have been published and COT have called for expert opinions as they prepare to update their report.

The US National Toxicology Program (NTP) also conducted a thorough analysis on the subject and reached a reassuring conclusion: “The NTP concluded there is minimal concern for adverse effects on development in infants who consume soy infant formula” (NTP, 2020).

Of course, soya is not a natural food for babies but then again nor is cow’s milk. Cow’s milk is meant for fast-growing calves, not humans, and is loaded with oestrogens – and not the mild ones derived from plants but potent oestrogens from another mammal. Cow’s milk is also implicated in a whole range of health problems in children such as digestive upsets, ear infections and skin conditions, it can interfere with iron absorption and contains virtually no iron of its own.

Rice is a food that very few people are allergic to, which is why it became the basic ingredient in hypoallergenic (not likely to cause an allergic reaction) infant formulas. Some babies are allergic or
intolerant to both cow’s milk and soya, so rice formulas were developed to suit their needs.

They are made of hydrolysed (broken down) rice protein to make them easy to digest and contain all the nutrients that every infant formula has to have in order to be approved. As there are often concerns over the presence of arsenic, heavy metals and pesticides in rice, there are strict criteria in place for infant
formulas that each product has to meet (Dupont et al., 2020).

According to the limited research currently available, hydrolysed rice formulas are a safe and suitable alternative to breastmilk or formula milk (Koo and Lasekan, 2007; Vandenplas, 2017; Dupont et al., 2020). As long as your baby drinks enough of the formula every day, their nutritional needs will be met and they will thrive.

Ensuring babies grow up with healthy teeth and gums is, of course, vitally important. All infant formulas must comply with standards which specify minimum and maximum amounts of carbohydrate (energy). Most formulas use lactose – the sugar in cow’s milk – as the source of this carbohydrate. In dairy-free
formulas, maltodextrin is the carbohydrate of choice.

Maltodextrin is derived from starch – usually from corn or wheat – and is a complex carbohydrate that is easily digested and provides energy. It is much less likely to cause tooth decay than glucose syrup, which used to be used in dairy-free formulas.

While sugars and sweet foods and drinks may increase the risk of tooth decay in people of all ages, we cannot avoid them at all times. Natural sugars are a part of many healthy foods, such as fruits, that are also among the first foods your baby will eat. That’s why it’s crucial to maintain good dental hygiene from an early age. Clean teeth are less prone to tooth decay – simple.

COT. 2013. Statement on the potential risks from high levels of soya phytoestrogens in the infant diet.

Messina M, Mejia SB, Cassidy A et al., 2021. Neither soyfoods nor isoflavones warrant classification as endocrine disruptors: a technical review of the observational and clinical data. Critical Reviews in Food Science and Nutrition. 1-57.