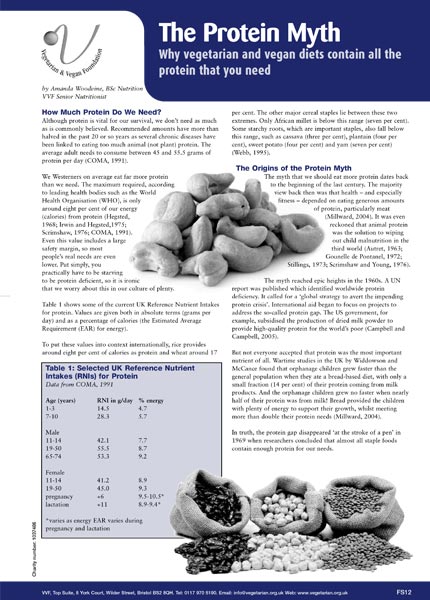 How Much Protein Do We Need?

Although protein is vital for our survival, we don’t need as much as is commonly believed. Recommended amounts have more than halved in the past 20 or so years as several chronic diseases have been linked to eating too much animal (not plant) protein. The average adult needs to consume between 45 and 55.5 grams of protein per day (COMA, 1991).

We Westerners on average eat far more protein than we need. The maximum required, according to leading health bodies such as the World Health Organisation (WHO), is only around eight per cent of our energy (calories) from protein (Hegsted, 1968; Irwin and Hegsted,1975; Scrimshaw, 1976; COMA, 1991). Even this value includes a large safety margin, so most people’s real needs are even lower. Put simply, you practically have to be starving to be protein deficient, so it is ironic that we worry about this in our culture of plenty.

Table 1 shows some of the current UK Reference Nutrient Intakes for protein. Values are given both in absolute terms (grams per day) and as a percentage of calories (the Estimated Average Requirement (EAR) for energy). 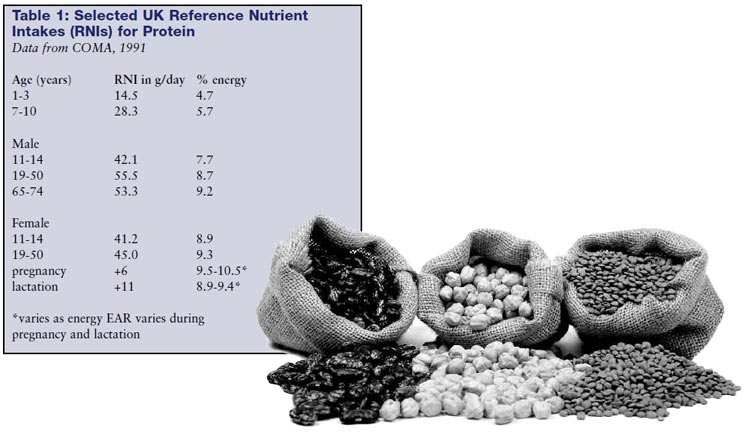 To put these values into context internationally, rice provides around eight per cent of calories as protein and wheat around 17 per cent. The other major cereal staples lie between these two extremes. Only African millet is below this range (seven per cent). Some starchy roots, which are important staples, also fall below this range, such as cassava (three per cent), plantain (four per cent), sweet potato (four per cent) and yam (seven per cent) (Webb, 1995).

The Origins of the Protein Myth

The myth that we should eat more protein dates back to the beginning of the last century. The majority view back then was that health – and especially fitness – depended on eating generous amounts of protein, particularly meat (Millward, 2004). It was even reckoned that animal protein was the solution to wiping out child malnutrition in the third world (Autret, 1963; Gounelle de Pontanel, 1972; Stillings, 1973; Scrimshaw and Young, 1976).

The myth reached epic heights in the 1960s. A UN report was published which identified worldwide protein deficiency. It called for a ‘global strategy to avert the impending protein crisis’. International aid began to focus on projects to address the so-called protein gap. The US government, for example, subsidised the production of dried milk powder to provide high-quality protein for the world’s poor (Campbell and Campbell, 2005).

But not everyone accepted that protein was the most important nutrient of all. Wartime studies in the UK by Widdowson and McCance found that orphanage children grew faster than the general population when they ate a bread-based diet, with only a small fraction (14 per cent) of their protein coming from milk products. And the orphanage children grew no faster when nearly half of their protein was from milk! Bread provided the children with plenty of energy to support their growth, whilst meeting more than double their protein needs (Millward, 2004).

In truth, the protein gap disappeared ‘at the stroke of a pen’ in 1969 when researchers concluded that almost all staple foods contain enough protein for our needs.

The main cause of death in children in developing countries is from something called protein-energy malnutrition. It usually develops in children who get too little protein and energy, and as the name of the condition reflects, these deficiencies tend to go hand-in-hand. Diets that contain enough energy (calories) typically contain plenty of protein, so the real problem is usually quantity, rather than quality of food.

Grains supply the vast majority of the calories the world eats, and they provide protein too – even though most people equate protein with animal foods like meat, fish or dairy. In fact, all plant foods – grains, pulses (peas, beans and lentils), nuts, seeds and vegetables – contain protein. And most foods can easily provide us with the eight per cent of calories from protein which the WHO recommends (see Table 2). The foods that are exceptions to this include fruits (which contain about five per cent of their energy from protein) and many sweets and junk foods. This makes it very easy to meet your protein needs and unnecessary to go out of your way to get protein in your diet.

What about Protein Quality?

To make protein, plants combine sugars (which they make from sunlight, carbon dioxide and water) with nitrogen from the air or soil. The end products are protein building blocks called amino acids. There are 20 or so different amino acids in your body, of which your body can make about 11 just from carbohydrate, fat and nitrogen (from protein) in your diet. Nine of the amino acids are called ‘essential amino acids’ which must be supplied by your diet as your body can’t make them (Geissler and Powers, 2005).

There is a persistent myth that vegetarians need to be well educated and choose protein foods that make up for the amino acid deficiencies of each other. But research shows that this is  unnecessary and that both vegetarians and omnivores get enough protein, including plenty of the amino acids they need, as long as they are getting enough calories. People can obtain all of the essential amino acids they need from the natural variety of plant proteins eaten each day (Campbell and Campbell, 2005). 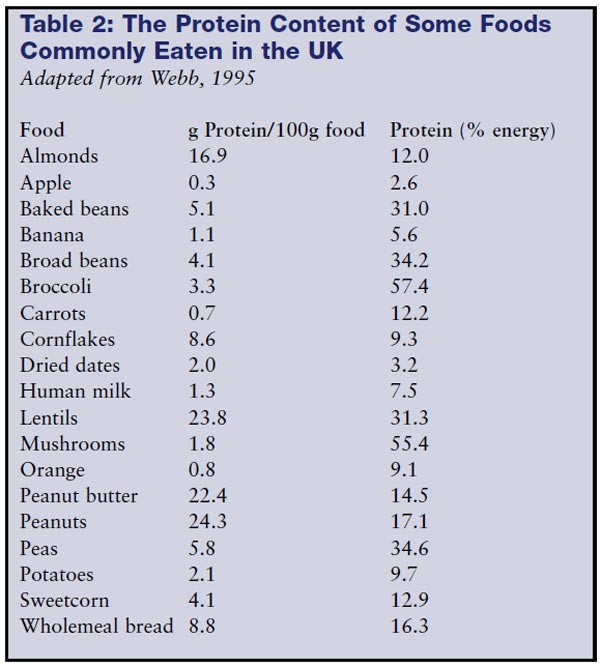 Why Do We Need Protein?

Proteins play an important role in the body, forming the basis of your muscles, hair, nails and collagen (the connective tissue that holds your body together). They are also required for the synthesis of various metabolic products, including neurotransmitters, thyroid hormones, haem (found in red blood cells), and nucleic acids (DNA and RNA). DNA and RNA determine the inherited characteristics of every living thing and play an important role in protein synthesis.

Too Much of a Good Thing?

Excess animal protein on the other hand, is linked with kidney disease, osteoporosis, cancers, type 2 diabetes and cardiovascular disease – and usually results from eating too many animal products. Animal products, even lean-looking meats, are often associated with large amounts of saturated fat and cholesterol – artery-clogging substances which are a main cause of heart disease, kidney failure and stroke as well as many cancers. But putting these hidden nasties aside, there is strong evidence to suggest it is excess protein per se which plays a part in all of these diseases.

There is a compelling case that animal proteins – independent of other associated nutrients – increase the risk for cancer, atherosclerosis, osteoporosis and type 2 diabetes (Yang et al., 2002; Holmes et al., 2003; Sieri et al., 2002; O’Keefe et al., 1999; Campbell et al., 1998; Campbell and Junshi, 1994; Messina and Messina, 2000; Hu et al., 1993; Song et al., 2004). This was particularly evident in the China Study – one of the largest and most comprehensive studies ever undertaken to examine the relationship between diet and disease. Huge differences were seen in disease rates based on the amount of plant foods participants ate compared to animal foods (Campbell et al., 1993; Campbell and Junshi, 1994; Campbell and Campbell, 2005).

Though boosting protein supply could improve nutrition in the third world, it’s not the only way and neither is it the best for long-term health. Countries whose people are starving are using their land to grow grain for export to feed the West’s farmed animals. Nutritionally valuable food is being fed to animals to produce meat, but by not using animals as meat-producing machines, this food could be freed to help those that need it most.

Vegetarian (and more so, vegan) diets use up far less of the world’s resources of food, land water and energy, and are a positive step we can all easily take to help feed people in poorer countries. By eating a range of whole, plant-based foods you will get all the different amino acids you need – and in the right proportions. There is no need to go out of your way to get protein or specific amino  acids or amino acid combinations. Rest assured that plant proteins can do a better job of meeting your protein needs than animal products, both because they are less concentrated sources of protein (making it less likely that you’ll get too much) and because they are more likely to be present with other nutrients such as fibre, vitamins, minerals, phytochemicals and healthy fats.

For further information on ensuring your diet is as balanced as it can possibly be, see the guide, Nutrition in a Nutshell or order a copy by calling 0117 970 5190.

Proteins form the basis of muscles, hair, nails and collagen. They are also needed to make a variety of other molecules, including neurotransmitters, thyroid hormones, haem, DNA and RNA.
Diets that contain enough energy (calories) typically contain plenty of protein. Most foods can easily provide us with the eight per cent calories from protein which the World Health Organisation recommends.
Western vegetarians and vegans get enough protein, including plenty of the amino acids they need, as long as they are getting enough energy (calories).
Especially good sources of high quality protein include soya products, cereals, pulses, nuts and seeds.
The average adult needs to consume between 45 and 55.5 grams of protein per day.
Excess animal protein is linked with kidney disease, osteoporosis, cancers, type 2 diabetes and cardiovascular disease.
Plant proteins can do a better job of meeting your protein needs than animal products, both because they are less concentrated sources of protein (making it less likely that you’ll get too much) and because they are more likely to be present with other nutrients such as fibre, vitamins, minerals, phytochemicals and healthy fats.

5. COMA, 1991. Committee on Medical Aspects of Food Policy. Dietary reference values for food energy and nutrients for the United Kingdom. Report on health and social subjects. No. 41. London: HMSO.

16. Scrimshaw, N.S., 1976. Shattuck lecture – strengths and weaknesses of the committee approach. An analysis of past and present recommended dietary allowances for protein in health and disease. New England Journal of Medicine. 294 (4) 198-203.