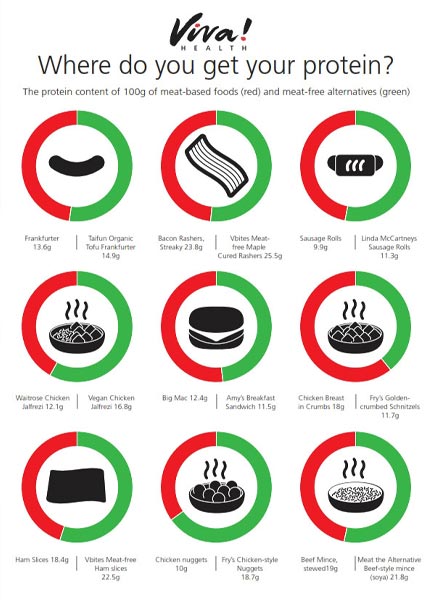 It’s that tired old chestnut asked by those who think meat, fish, eggs and dairy are the only foods that contain protein. All plant foods contain protein! If you eat enough calories in a varied, vegan diet, it is very difficult to go short. Deficiency is rare in Western societies and usually the result of disease or ageing rather than diet. So, exactly how does meat compare to a range of meat-free options?

For example, beef mince contains 21.8g per 100g while soya mince contains 19g. A Big Mac contains 12.4g of protein per 100g and Amy’s breakfast sandwich (a meatless sausage patty in a bun with sauce and scrambled tofu plus a slice of Tofutti American Vegan Cheese) contains 11.5g. Sausage rolls, bacon rashers and frankfurters all contain within one or two grams of their vegan alternatives. That said, just as it is not healthy to eat lots of meat, it is not a good idea to eat lots of processed foods as they tend to contain relatively high levels of fat and salt which can increase the risk of obesity and CVD. Perhaps the main difference from a health perspective is the vegan alternatives are not linked to cancer!

This post has been categorised in: All Print Materials, Wallcharts