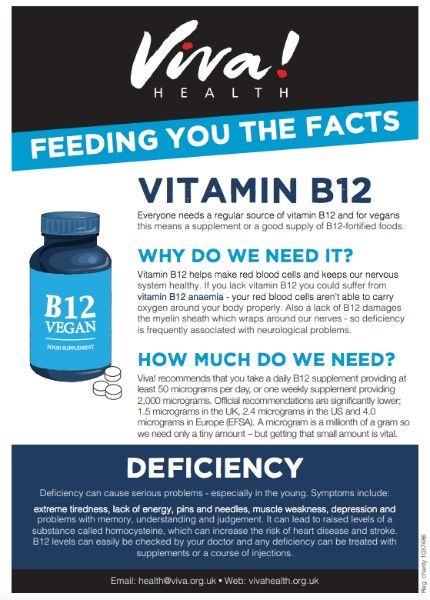 Why do we need it?

Vitamin B12 helps make red blood cells and keeps our nervous system healthy. If you lack vitamin B12 you could suffer from vitamin B12 anaemia – your red blood cells aren’t able to carry oxygen around your body properly. Also a lack of B12 damages the myelin sheath which wraps around our nerves – so deficiency is frequently associated with neurological problems.

Deficiency can cause serious problems – especially in the young. Symptoms include: extreme tiredness, lack of energy, pins and needles, muscle weakness, depression and problems with memory, understanding and judgement. It can lead to raised levels of a substance called homocysteine, which can increase the risk of heart disease and stroke. B12 levels can easily be checked by your doctor and any deficiency can be treated with supplements or a course of injections.

B12 is naturally made by bacteria in soil and water or is grown in vats for supplements. Traditionally, farmed animals got B12 from eating food from the ground but with so many now confined in factory farms, animals are fed B12 supplements. The notion that you need meat or dairy foods for B12 is a myth – cut out the middleman and take the supplements yourself!

B12 absorption is a complicated process that declines with age and B12 in meat and dairy is bound to animal protein, making it even harder to absorb. Up to 40 percent of older people (regardless of diet) in the UK suffer from low B12 and in the US, everyone over 50 is advised to take a supplement. Absorption, a tricky issue Absorption can be inhibited by poorly functioning kidneys, cigarette smoke, nitrous oxide used for anaesthesia, heating food in a microwave or cooker and some medications, including Metformin (for diabetes), anticonvulsants and proton pump inhibitors (PPI’s).

Too much of a good thing?

Vitamin B12 is water-soluble so if you take too much, it simply comes out in your urine. Guidelines say that up to 2,000 micrograms a day is unlikely to cause problems, but you shouldn’t take more than that.

Top up a few times a week with a supplement to ensure you’re getting enough. A well-planned, varied vegan diet, including B12 fortified foods and supplements, not only meets your requirements but provides a healthier source than meat or dairy, setting you up for a healthy old age.