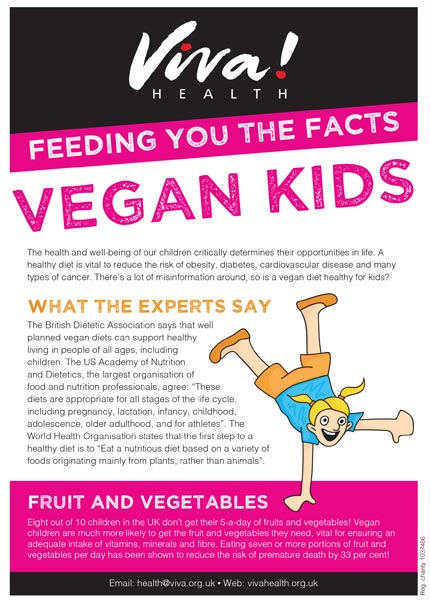 Why a vegan diet is best for kids

The health and well-being of our children critically determines their opportunities in life. A healthy diet is vital to reduce the risk of obesity, diabetes, cardiovascular disease and many types of cancer. There’s a lot of misinformation around, so is a vegan diet healthy for kids?

What the experts say

The British Dietetic Association says that well planned vegan diets can support healthy living in people of all ages, including children. The US Academy of Nutrition and Dietetics, the largest organisation of food and nutrition professionals, agree: “These diets are appropriate for all stages of the life cycle, including pregnancy, lactation, infancy, childhood, adolescence, older adulthood, and for athletes”. The World Health Organisation states that the first step to a healthy diet is to “Eat a nutritious diet based on a variety of foods originating mainly from plants, rather than animals”.

Eight out of 10 children in the UK don’t get their 5-a-day of fruits and vegetables! Vegan children are much more likely to get the fruit and vegetables they need, vital for ensuring an adequate intake of vitamins, minerals and fibre. Eating seven or more portions of fruit and vegetables per day has been shown to reduce the risk of premature death by 33 per cent!

Babies are born with their own iron stores, which deplete at around six months of age. From this point iron can be provided by wholegrains (quinoa, wholewheat pasta, wholemeal bread, brown rice and oats), fortified breakfast cereals, pulses (peas, lentils, beans including soya), seed butters* and tahini, dried fruit (apricots and figs), seaweed (nori) and dark green leafy vegetables.

Nuts and seeds* are a great source of healthy fats like omega-3s. Try adding some ground flaxseed to breakfast cereals or a small handful of walnuts* to homemade smoothies

*A note on nuts: whole nuts and seeds shouldn’t be given to children under five in case they choke.

Whole grains, green beans, courgettes, kale, spring greens, watercress, strawberries and organic potatoes with skin all provide iodine but amounts tend to be low and variable. Seaweed (like the type used in sushi) can be a good source but should be given to children in moderation – no more than once a week as it can contain very high amounts (avoid kelp as it often contains excessive levels). The iodine in cow’s milk and dairy products comes from iodine supplements in cattle feed and iodine-containing disinfectant udder washes!

Everyone (including children) should take vitamin D in winter due to lack of sunlight. Vegan children should take a daily B12 supplement or consume adequate amounts of fortified foods – they only need a small amount (around five micrograms a day) but this is vital. A healthy, varied vegan diet will supply all the other nutrients they need.