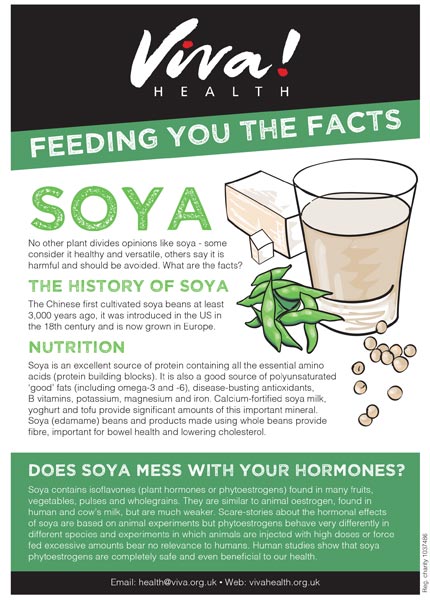 No other plant divides opinions like soya – some consider it healthy and versatile, others say it is harmful and should be avoided. What are the facts?

The history of soya

The Chinese first cultivated soya beans at least 3,000 years ago, it was introduced in the US in the 18th century and is now grown in Europe.

Does soya mess with your hormones?

Soya contains isoflavones (plant hormones or phytoestrogens) found in many fruits, vegetables, pulses and wholegrains. They are similar to animal oestrogen, found in human and cow’s milk, but are much weaker. Scare-stories about the hormonal effects of soya are based on animal experiments but phytoestrogens behave very differently in different species and experiments in which animals are injected with high doses or force fed excessive amounts bear no relevance to humans. Human studies show that soya phytoestrogens are completely safe and even beneficial to our health.

Soya protects heart health by lowering ‘bad’ cholesterol levels, it does this by reducing the amount produced in the liver.

There were concerns that soya foods may increase the risk of breast cancer or make the condition worse in some women. Extensive research over the last 25 years suggests that there are no known negative effects of soya on breast cancer. In fact, eating soya during childhood and adolescence lowers the risk of breast cancer later in life and eating soya after being diagnosed with breast cancer lowers the risk of recurrence and may improve treatment outcomes. This may be due to isoflavones blocking the more potent oestrogens in the blood. For this protective effect it is reasonable to recommend that girls and young women include at least modest amounts of soya in their daily diet (one medium serving of tofu or a glass of soya milk).

There is little evidence that soya foods adversely affect thyroid function in healthy people whose diets contain enough iodine. You may need to restrict your intake to a moderate level if you have a thyroid condition.

Soya foods can help combat menopausal symptoms – women who eat the most soya have less than half the number of hot flushes than those eating the least.

Amid concerns about soya disrupting sexual development and fertility, the UK Government commissioned a substantial review which found no evidence of this effect. Millions of people in the US have been raised on soya formula over the last 40 years with no adverse effects; China has used soya in far greater quantities than the West for thousands of years with no impact on male fertility.

Are all soya products equal?

Traditional foods such as soya milk, tofu, tempeh, miso and soya sauce are made using precipitation or fermentation methods. Many use the whole bean so are healthier than products made from processed soya protein (TVP and other meat substitutes) which still provide a good low-fat source of protein but are not as healthy as tofu or tempeh.

The ever-expanding scale of soya production is a serious problem – but not because of vegans! The vast majority of soya is fed to livestock – cows, pigs and chickens – so that people can eat meat, dairy and eggs. Only around six per cent of soya is eaten by humans. Importantly, soya grown for human consumption in the UK mainly comes from Europe and none of it from rainforests.