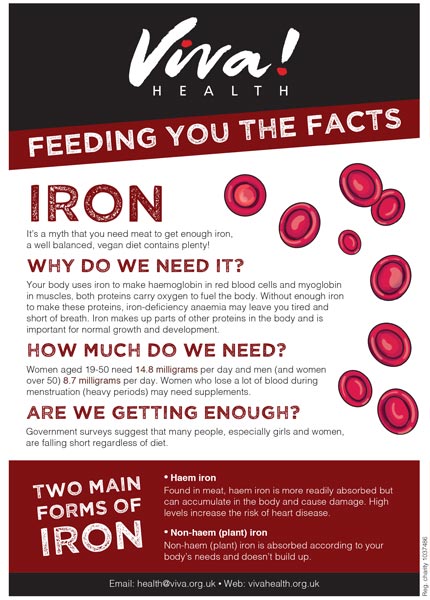 It’s a myth that you need meat to get enough iron, a well balanced, vegan diet contains plenty!

Why do we need it?

Your body uses iron to make haemoglobin in red blood cells and myoglobin in muscles, both proteins carry oxygen to fuel the body. Without enough iron to make these proteins, iron-deficiency anaemia may leave you tired and short of breath. Iron makes up parts of other proteins in the body and is important for normal growth and development.

Government surveys suggest that many people, especially girls and women, are falling short regardless of diet.

There are two main forms of iron:

Getting the balance right

No, a varied, vegan diet rich in wholegrain foods, pulses, nuts, seeds and green leafy vegetables will cover your needs. The EPIC Oxford study, one of the largest studies of vegetarians and vegans, found that vegans had the highest intake of iron, followed by vegetarians, then fish-eaters with meat-eaters coming last. The American Dietetic Association say that iron-deficiency anaemia is no more common among vegetarians than meat-eaters.

The myth that spinach contains exceptional levels can be traced back to a mathematical error when a German chemist misplaced the decimal point making the iron content of spinach seem ten times higher than it really is! Popeye helped spread the myth even further. Spinach is a good source, but not off the scale. Steamed baby spinach contains more iron per gram than a sirloin steak from a steakhouse!

A substance called phytate found in pulses, grains and seeds can bind to iron and reduce absorption. Soaking pulses and discarding the water can help as can sprouting grains and seeds. Vitamin C helps you absorb iron. The vitamin C in eight strawberries or a 200ml glass of orange juice can increase iron absorption three- to four-fold. To boost your iron levels combine vitamin C-containing foods with iron-rich meals – beans on toast with apple juice or watercress salad with dates, pumpkin seeds and slices of orange.