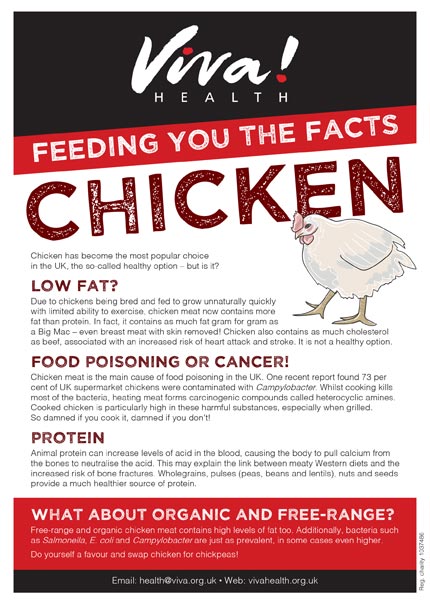 Chicken has become the most popular choice in the UK, the so-called healthy option – but is it?

Due to chickens being bred and fed to grow unnaturally quickly with limited ability to exercise, chicken meat now contains more fat than protein. In fact, it contains as much fat gram for gram as a Big Mac – even breast meat with skin removed! Chicken also contains as much cholesterol as beef, associated with an increased risk of heart attack and stroke. It is not a healthy option.

Chicken meat is the main cause of food poisoning in the UK. One recent report found 73 per cent of UK supermarket chickens were contaminated with Campylobacter. Whilst cooking kills most of the bacteria, heating meat forms carcinogenic compounds called heterocyclic amines. Cooked chicken is particularly high in these harmful substances, especially when grilled. So damned if you cook it, damned if you don’t!

Animal protein can increase levels of acid in the blood, causing the body to pull calcium from the bones to neutralise the acid. This may explain the link between meaty Western diets and the increased risk of bone fractures. Wholegrains, pulses (peas, beans and lentils), nuts and seeds provide a much healthier source of protein.

What about organic and free-range?

Free-range and organic chicken meat contains high levels of fat too. Additionally, bacteria such as Salmonella, E. coli and Campylobacter are just as prevalent, in some cases even higher.

Do yourself a favour and swap chicken for chickpeas! 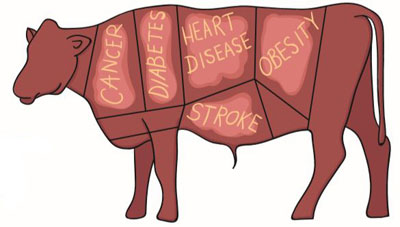 Red meat includes beef, pork, lamb and goat – despite being linked to a range of diseases including all our biggest killers – heart disease, diabetes, cancer and obesity, many still believe it to be healthy. What are the facts?

It’s often said that red meat is ‘healthy in moderation’, but the healthiest amount of red meat to consume is none. In 2015 the World Health Organisation added red meat to its list of carcinogens, due to associations between red meat and colorectal cancer, as well as pancreatic and prostate cancer. Red meat is high in saturated fats – linked to cancers of the breast, prostate and bowel, as well as heart disease.

Red meat contains many compounds linked to an increased risk of heart disease. They include saturated fat, cholesterol, animal protein and inflammatory components such as trimethylamine N-oxide (TMAO), heterocyclic amines, endotoxins and haem iron. Avoiding all meat (and all other animal products) can reduce your risk of heart disease by a whopping 30 per cent or more.

Red meat is associated with type 2 diabetes – up to 74 per cent increased risk with just one portion of meat a week! One reason for this is the high saturated fat content which stops insulin working properly.

Why vegan is best

A varied vegan diet provides all the healthy plant protein you need along with a vast array of vitamins, minerals, omega-3 and omega-6 fats, anti-inflammatory phytochemicals and fibre – which you won’t find in meat!