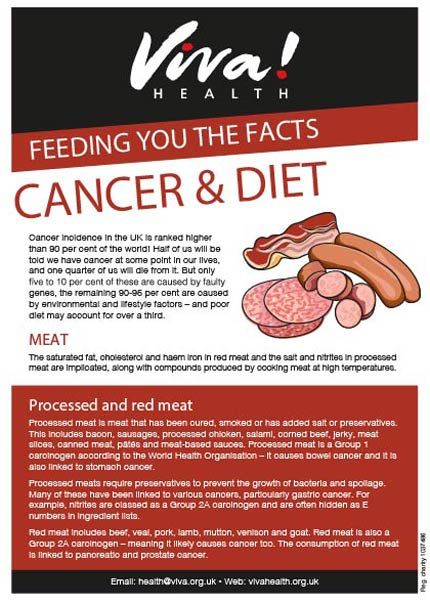 Cancer incidence in the UK is ranked higher than 90 per cent of the world! Half of us will be told we have cancer at some point in our lives, and one quarter of us will die from it. But only five to 10 per cent of these are caused by faulty genes, the remaining 90-95 per cent are caused by environmental and lifestyle factors – and poor diet may account for over a third.

The saturated fat, cholesterol and haem iron in red meat and the salt and nitrites in processed meat are implicated, along with compounds produced by cooking meat at high temperatures.

Processed meat is meat that has been cured, smoked or has added salt or preservatives. This includes bacon, sausages, processed chicken, salami, corned beef, jerky, meat slices, canned meat, pâtés and meat-based sauces. Processed meat is a Group 1 carcinogen according to the World Health Organisation – it causes bowel cancer and it is also linked to stomach cancer.

Processed meats require preservatives to prevent the growth of bacteria and spoilage. Many of these have been linked to various cancers, particularly gastric cancer. For example, nitrites are classed as a Group 2A carcinogen and are often hidden as E numbers in ingredient lists.

Due to the risk of food poisoning, meat must be cooked to destroy harmful bacteria. However, cooking at high temperatures creates carcinogenic compounds linked to bowel cancer. Grilling and barbequing meat (and fish) creates especially high amounts of these. The type of iron found in meat, haem iron, has also been linked to bowel cancer.

Cow’s milk contains a cocktail of hormones, including oestrogens and growth factors that help turn a new-born calf into a cow in just a year. Oestrogen in dairy is a carcinogen and is linked to breast cancer. The animal protein in milk (and meat) also increases our levels of IGF-1, a growth factor that raises the risk of several cancers including those of the breast, prostate, lung and bowel.

Red meat, chicken and dairy products (hard cheeses, cream and butter) are high in saturated fat, which are linked to an increased risk of breast, prostate and bowel cancer.

Phytoestrogens are found in many fruits, vegetables, wholegrains and pulses such as soya. These are plant chemicals that are similar in structure, but between 100-100,000 times weaker than mammalian oestrogens found in cow’s and goat’s milk. Many of the concerns over soya originate from animal studies, which don’t apply to humans as phytoestrogens act very differently in different species. Research suggests soya may actually lower the risk of breast cancer and its recurrence, whereas the oestrogen, IGF-1 and saturated fat in cow’s milk may increase the risk of breast cancer.

How to reduce your risk?

The majority of cancers are preventable. To lower your risk choose a varied vegan diet containing plenty of fresh fruit and vegetables, wholegrain foods, pulses, nuts and seeds. This will provide bowel-protecting fibre, a rich source of vitamins and minerals, and antioxidants that can help combat harmful molecules called free radicals. A large study on diet and cancer found that UK vegetarians had an 11 per cent lower risk than meat-eaters, but vegans had up to 20 per cent lower risk!

Consuming animal products increases the risk of various cancers, whereas a varied vegan diet has a protective effect – it’s an easy choice!