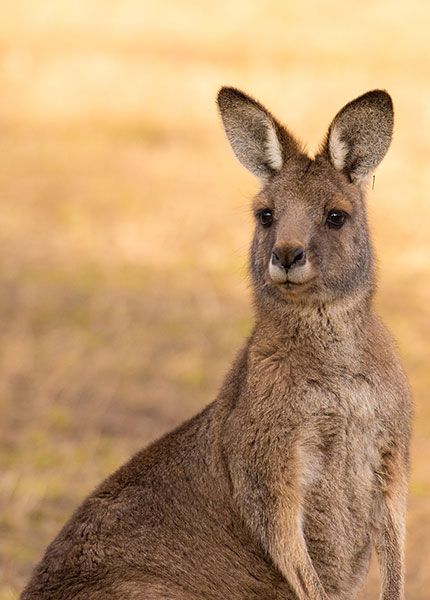 The Australian Government authorises the slaughter of millions of kangaroos every single year. They are shot at night in the vast outback, away from public scrutiny. It is the largest annual massacre of wild land animals on the planet.

The slaughter of kangaroos is largely driven by the market for meat and leather. Through effective campaigning, Viva! ended the sale of kangaroo meat at all UK supermarkets around 1999/2000. After a decade of campaigning, we persuaded football giants Adidas and Nike to phase out kangaroo leather from their lines of soccer boots in 2010-2011. However, in the past couple of years budget supermarkets, such as Lidl and Iceland, have begun selling kangaroo meat again. In 2018 we contacted both Managing Directors of the budget supermarket chains and appealed for a commitment to save the kangaroo and drop meat sales. We received positive responses from both companies and from June 2018 are pleased to announce that kangaroo meat has been removed from all major UK supermarkets!

The size of the industry

6.9 million kangaroos are earmarked for slaughter in 2018. Since 2001 (compared to 2015) there has been an overall drop of 12,577,598 kangaroos in the areas where they are hunted (according to the Australian Government’s own figures).

Although often called a ‘cull’ the annual slaughter of kangaroos is not about removing sick or weak animals. Because it is commercially driven, shooters tend to target the largest animals as they yield the most meat and leather. This taking of mature animals can have a devastating effect on mobs of kangaroos and can remove healthy genetic lines needed to ensure future generations thrive.

The kangaroo ‘cull’ figure does not include the hundreds of thousands of baby ‘joey’ kangaroos that are always killed after their mothers are shot (some estimates put the figure close to a million each year). The Australian Government’s own guidelines insist on clubbing or decapitating joeys, as they cannot survive without their mothers.

Still dependent on their mothers, the guidelines say that adolescent kangaroos should also be shot. However many escape and will die of predation from wild animals. In June 2014, a report by the RIRDC (Rural Industries Research and Development Corporation) called ‘Improving the humaneness of commercial kangaroo harvesting’ found that shooters rarely euthanized young-at-foot dependent joeys and left them to die in the field for up to 10 days. It also found that many shooters swung pouch joeys against their trucks to kill them. It also reported on research into the effectiveness of bolt guns to kill joeys – and found that not one of the 23 live joeys was killed outright; with 13 out of 23 joeys not rendered completely insensible. All joeys had to be consequently euthanized by other means.

Some suppliers are claiming to only supply or sell kangaroo meat from males. However, no convincing proof has ever been supplied that this is the case and it is certainly not officially monitored. Even if it was true, the arguments about cruelty and unsustainability remain.

Regardless of gender, shooters aim for the head, but kangaroos have small heads. With animals hopping in all directions, many are miss-shot and suffer horrendous injuries. Jaws are blown off, they lose eyes, have arms/legs shot off and try to hobble away on one foot or suffer internal injuries.

Research by the RSPCA in Australia and Animal Liberation NSW has suggested that around 120,000 kangaroos a year are inhumanely killed but the number could be much higher (according to Thinkk [University of Technology Sydney] up to a million), as there is no one there to monitor the many kangaroos shot – but not killed outright – that will escape into the bush to die a slow, painful death. Dr John Auty, veterinary scientist and former Chief Agronomist, says: “Shooters often have a thorough contempt for the law. They commit cruelty on a regular basis.”

Many myths and excuses have been spread to attempt to justify the commercial killing of kangaroos. They are often termed a ‘pest’, yet research has shown that they rarely venture onto wheat fields and do not compete for grazing with sheep.

Another myth is the population explosion. Kangaroos are a slow-breeding marsupial with low reproductive rates. A kangaroo can only raise one joey to independence per year.

The most ridiculous myth is that kangaroos damage the very environment that they have evolved over millions of years to live in.

Far from exploding, populations of kangaroos in some areas of Australia have plummeted in recent years and recently dropped by half in most areas of Queensland. Analysis of NSW (New South Wales) government count data obtained under FOI by scientist Ray Mjadwesch showed up to 64% of NSW western survey transects are returning zero counts of kangaroos.

Wildlife experts are concerned that turning them into just another commodity is not only cruel it is unsustainable. Therefore it is unsurprising that there is a very real fear that popularising kangaroo meat in Britain could have an incremental, devastating impact on Australian wildlife. Australia already has the world’s worst record for wildlife extinctions, with 23 birds, 78 frogs, and 27 mammal species (including kangaroos) having vanished forever since Western settlement.

Further to demolish this myth on over-population, Australian Senator Lee Rhiannon states: “It is biologically impossible for kangaroo populations to ‘explode’. They are slow-breeding, slow-growing marsupials with 73% juvenile mortality. Kangaroo population growth sits at 3-10% in good years, with up to 60% crashes during drought.” Much of Australia recently experienced extreme drought, which can have a major impact on kangaroo numbers. Yet the commercially driven killing continues.

The kangaroo industry exists for commercial reasons alone. Any business is based on the concept of growth. Commercialising any truly wild animal is unsound from a conservation point-of-view.

Hard-hoofed animals such as sheep and cattle destroy the fragile ground soil in many parts of Australia, but that does not mean plundering a native species is a sensible alternative. It is also ironic that some UK retailers are trying to justify selling kangaroo as a ‘green alternative’ considering the sizeable greenhouse gases generated by transporting it literally from one side of the planet to the other!

Sellers in the UK often claim their suppliers “… process the meat in EU-approved facilities that ensure the highest standards of food safety and hygiene.” However, this ignores the actual killing and initial butchering of the animals – which happens where they are shot in the heat and the scrub of the outback. Kangaroos are only inspected for disease after they have been killed, but the unclean nature of killing on dirt (with bacteria, excrement and blood on the ground, dirty trucks etc) means that many do not consider the meat safe to eat.

Contamination is that much of a threat that the industry is advising its shooters to spray kangaroo carcasses with acetic acid in the field. However, Food Standards Australia New Zealand are not monitoring the extent of its use and have not prescribed a maximum limit.

A recent report in the Australian press said that investigations by the NSW Food Authority found numerous failures in basic hygiene by the NSW kangaroo meat industry.  This led to Australian MP John Kaye to say: “This so-called healthy alternative to other red meats could be riddled with pathogens.” Independent testing has found dangerously high levels of salmonella and E.coli in kangaroo meat bought from supermarkets and in 2014, dog ‘treats’ made from kangaroo meat were withdrawn because of salmonella contamination. Also in 2014, Russia detected contamination in kangaroo meat for a third time imported from Australia. Russia has subsequently banned imports of kangaroo meat due to unacceptable levels of E.coli bacteria. A letter from Defra (April 2015) confirmed that there are no checks on kangaroo meat by British authorities and that they rely on testing in Australia before the meat is exported. This despite them being aware that Russia has banned kangaroo meat because of human health concerns and continuing failures within Australia itself. Furthermore, new rules will mean less health monitoring of food related illnesses and deaths in Australia. In June 2017, a kangaroo meat processing plant in Australia was closed because of food safety fears.

Infection with Toxoplasma gondii is a “significant problem” in kangaroos. Experts say that T. gondii infection in kangaroos is “… also of public health significance due to the kangaroo meat trade.” Humans can contract foodborne toxoplasmosis from eating raw/undercooked meat containing parasitic cysts. Because kangaroo meat is often undercooked (due to low fat content) this can heighten the risk of infection. Although T. gondii infection may not result in illness in most healthy adults, immuno-compromised groups and pregnant women are especially at risk of complications from contaminated meat. The American Government says: “Severe toxoplasmosis, causing damage to the brain, eyes, or other organs, can develop from an acute Toxoplasma infection or one that had occurred earlier in life and is now reactivated. Severe cases are more likely in individuals who have weak immune systems, though occasionally, even persons with healthy immune systems may experience eye damage from toxoplasmosis.”

The Australian Senate confirmed in February 2015 that kangaroo meat for human consumption is not tested for zoonotic diseases such as Toxoplasma gondii and that this is not a requirement for any importing country – including the UK. In other words, no one knows how much diseased kangaroo meat is being imported into the UK and how many people have been infected by it.

There are also other human health concerns with kangaroo meat. A chemical called L-carnitine is present in all red meat but kangaroo meat has more per gram than any other meat. Research from 2013 associates L-carnitine consumption with a build-up of fatty deposits in blood vessels, which can lead to heart disease, strokes and heart attacks.

Why campaign specifically on kangaroos?

Viva! campaigns on all farmed animal issues. We advocate a vegan diet as the best way to end the suffering of animals. We run campaigns against the killing of all animals for food and obviously, we do not want wild land animals adding to the list of murdered animals killed for meat. And as you may be aware, many millions of people have supported this campaign and changed their own diet. There are major ethical, conservation and cruelty concerns with commercially hunted wild animals. That’s why we support wildlife groups in Australia fighting the unsustainable and cruel trade in kangaroo meat and skins. This does not detract from any other campaign, in fact we emphasise again that it acts to bring in new people to the concept of going vegan.

Kangaroos are not farmed; they are truly wild animals. As such, their population can fluctuate massively – and can be especially impacted by factors that can be difficult to predict, such as drought (which is only expected to worsen because of climate change) and disease. Whilst populations can build up in some areas they have plummeted in others. In 2011, the four large kangaroo species that can be commercially shot were nominated for listing in New South Wales as threatened. Australia has the worst wildlife record in the world – six species of kangaroos extinct, four more extinct on the Australian mainland, 17 species endangered or vulnerable. Commercialising any wild animal creates a business model that thrives on growth and there are a finite number of kangaroos. It is a model for disaster.