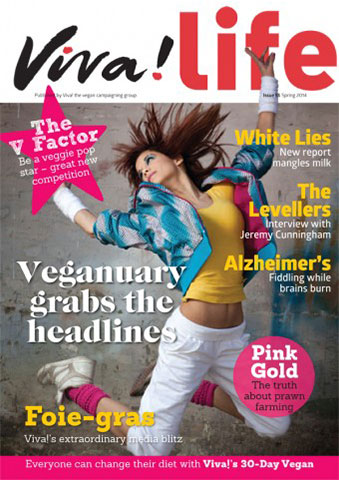 Viva! has had a huge impact and countless numbers of people have contacted us over the years saying it was our actions that persuaded them to change their diet. It has saved innumerable animals lives.

We have reached millions of people through our high profile campaigns – ending kangaroo and ostrich meat sales in supermarkets, persuading Amazon and other outlets to dump foie-gras, causing a massive slump in horse meat exports in Eastern Europe. Only two per cent of the nation claims to have increased its meat consumption in the last year while a quarter cut back. One in six 18 to 24 year olds say they are vegetarian. The top reason driving this is animal welfare. A massive three billion fewer meaty meals were eaten in Britain in 2011 than in 2005 – and five million Brits avoid dairy. The wave is rising.

I was delighted to help launch Veganuary at the start of this year (see page 14). This successful campaign has been followed up by Viva!’s 30 day Vegan – those who sign up receive a daily email bulletin of fabulous recipes. There are fun cookery videos showing that anyone can cook
vegan. See 10 year olds, Jazz and Finn, being kitchen creative (why aren’t they more like that at home?!) and the rather more mature doing some nifty chopping! I admit one of the demos is by me – the only cookery demo I will ever do! Sign up at www.viva.org.uk/30dayvegan.

Viva! has worked non-stop to expose factory farming in the UK and one of the toughest campaigns was filming farms that supply Cadbury with milk. Beautiful dairy cows, their bodies racked in pain as they give birth after a nine month pregnancy, having their babies torn from them. It is tragic and cruel but as I’ve said, dairy sales are falling.

At the end of March, we are launching two major pieces of work: The Dark Side of Dairy reveals how cows and calves are farmed; and White Lies is a 238-page, fully-referenced insight into how dairy destroys our health (page 8). See our new web site www.whitelies.org.uk and help
us spread the word in our 20th year.

Finally, I hope to see you at our very special 20th anniversary celebration dinner. The venue is fantastic – the Erasmus, a spacious and beautiful riverboat, offering stunning views of the Thames (page 11).

Thanks so much for being a part of Viva!.