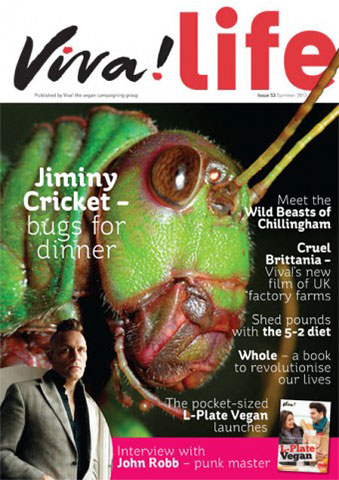 When talking about farmed animals, how many times have you heard: “but we’re not that cruel in the UK”, “we have laws to protect animals” or “you have probably seen footage of a rogue farm”?

Sadly, Britain has not got the best animal welfare in the world – but Viva! wants to turn Cruel Britannia into Cool Britannia!

We have just launched a powerful short film, Cruel Britannia, that is incredibly moving. You would need a cold heart to remain untouched. It is on YouTube for you to show to anyone you know who eats animals.

The film is based on the brave and agonisingly difficult investigations that you, our supporters, have recently funded and includes the major players in the UK farming industry.

The film shows you exactly what happens behind closed doors to keep shop shelves stocked with meat, eggs and dairy. I have shown it to four groups of meat eaters and could feel the sense of shock in the air. Most encouragingly, almost everyone vowed to change.

See the film now at www.viva.org.uk/cruelbritannia.

If you’d like to help teenagers to become veggie or vegan, how about becoming a school speaker?

Our speakers are across the UK and all say it is one of the most beneficial and rewarding things they have ever done.

You give as much or as little time as you can. Our next training day is in September and details are on page 43.

Talking of teenagers, one of their main concerns is spots!

Read page 33 to discover how hormones in cows’ milk trigger acne. It may be an argument you find more useful than ‘dairy promotes cancer’ with a 14 year old!

Are insects the solution to global food shortages?

You will have noticed our striking front cover!

Lots of you have talked to me about TV shows which love the appeal of the macabre as they challenge contestants to munch a live witchetty grub.

This trend of filming revolting people with revolted expressions as they eat wriggling larvae has exploded into media stories propounding the bizarre notion that insects are the solution to global food shortages. They are not! See pages 22 to 23.

I’m delighted that renowned wildlife photographer, Christopher Rimmer, has joined our campaign to stop Nikon from supporting hunting. Despite having a 30 year association with the corporate giant, he has forcefully spoken out against their involvement of trophy hunting in Africa. See his fantastic, passionate and eloquent quote on page 17.

Investigations have uncovered the appalling practice of ‘canned hunting’ in South Africa, where lions are, in effect, factory farmed. Cubs are taken from their mothers and hand reared so that they trust humans. They are then shot dead by people paying thousands for the ‘privilege’ of murdering a tame lion with no chance of escape. Go to www.viva.org.uk/nikon to join our campaign.

Finally, if you have heard of the success of the 5-2 diet but noticed many of the recipes contain meat, fish or dairy – help is at hand!
Viva! has produced a vegan version (page 24) and we have explored why intermittent fasting works and ask is it safe (page 26).