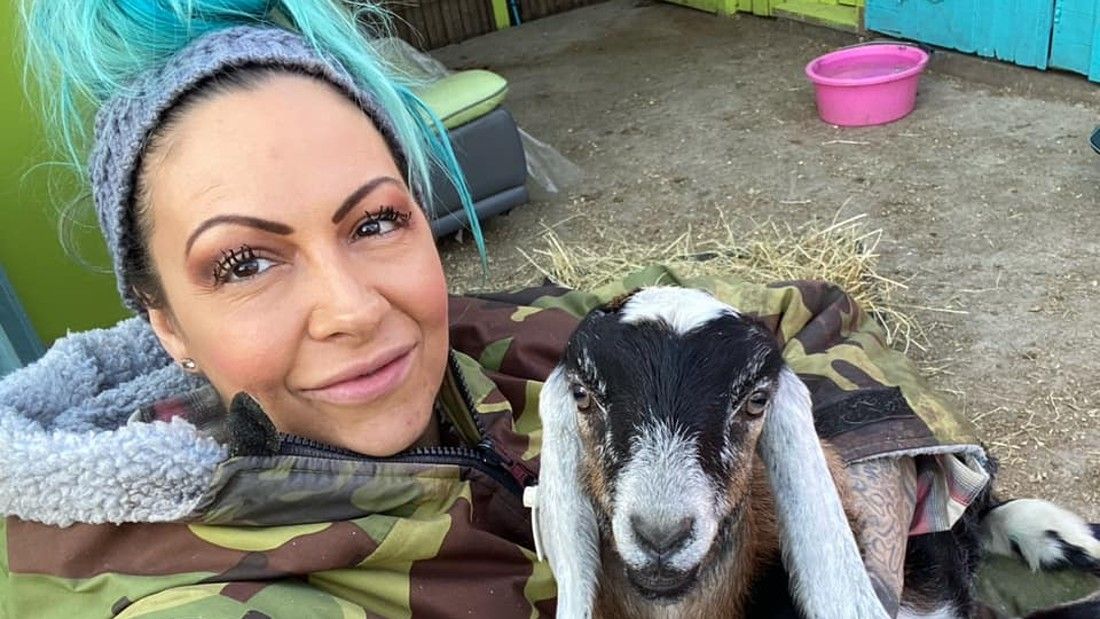 Jodie Marsh is an English media personality, bodybuilder, writer, model and activist. She burst onto Television screens in 2002 in the documentary series Essex Wives, which gave her numerous modelling opportunities. She took part in many reality televsion shows including Celebrity Big Brother and won the celebrity edition of The Weakest Link in 2006. In 2010, Marsh became a bodybuilder, once again appearing in many fitness magazines. She owns a sports nutrition company called JST Nutrition – although they do make a vegan protein powder, not all products are suitable for vegans.

According to her website, Jodie went vegetarian at the age of five and provides a home to ten rescued animals (although with a newly opened sanctuary that number will no doubt increase).1Jodiemarsh.com. 2021. About. Available: https://jodiemarsh.co.uk/about/ [Accessed 9 September 2021]. She campaigns against puppy farming, has worked with animal rights charities to promote veganism2Peta. 2006. Jodie Marsh Uses Her Naked Body To Appeal For Animals Labelled As Meat. Available: https://www.peta.org.uk/media/news-releases/jodie-marsh-uses-her-naked-body-to-appeal-for-animals-labelled-as-meat/ [Accessed 9 September 2021]., and supports animal sanctuaries. In 2021, she opened an animal rescue centre called Fripps Farm and began selling lots of her designer products to raise money for the animals. On Twitter she stated that animal rescue is her life now.3Marsh, J. 2021. Twitter post. Available: https://twitter.com/JodieMarsh/status/1424396826166321153 [Accessed 9 September 2021].

She often shares vegan recipes on Twitter and her website. Her journey to a vegan lifestyle hasn’t been smooth sailing though as she got to grips with some thorny issues. She caused controversy when she appeared in Jodie Marsh Goes Hunting and referred to vegans as “preachy”.4Vegan Life Magazine. 2016. Facebook post. Available: https://www.facebook.com/veganlifemagazine/posts/have-you-seen-what-vegetarian-jodie-marsh-has-said-about-killing-pigeons-crows-a/548751361976707/ [Accessed 9 September 2021]. Thankfully it seems, through her exploration of these topics, she came to a compassionate conclusion.

“I don’t eat any animals. I could never eat a dog, and I don’t see how a chicken, a cow, a sheep, a pig or any animal is any different, because all animals have a mind and a personality.”2Peta. 2006. Jodie Marsh Uses Her Naked Body To Appeal For Animals Labelled As Meat. Available: https://www.peta.org.uk/media/news-releases/jodie-marsh-uses-her-naked-body-to-appeal-for-animals-labelled-as-meat/ [Accessed 9 September 2021].