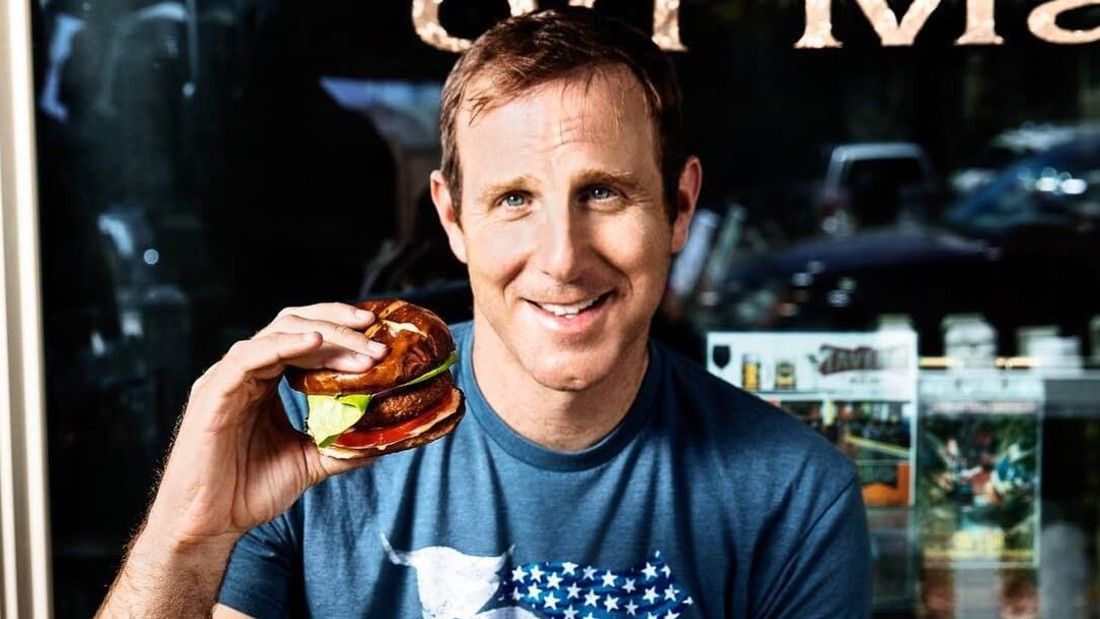 Ethan Brown is the founder, president and CEO of Beyond Meat, a plant-based meat company with a mission of eliminating the need to farm animals for food.

Ethan has been vegan since the early 2000s, although he says he sometimes has to test the taste of meat for food development but always spits it out.1Park, A. 2019. Why We Don’t Need Animals to Keep Enjoying Meat. Time. Available: https://time.com/5601980/beyond-meat-ceo-ethan-brown-interview/ [Accessed 17 September 2021].

Despite his father running a dairy operation, Ethan soon realised that the unfair treatment of farmed animals couldn’t be justified so went vegetarian in his teens. A few years later, he was vegan.

Although he was refraining from eating animal-based products, Ethan still missed the taste of a good burger or sausage so Beyond Meat was born in 2009. Ethan believes that we won’t need to tell people not to eat meat if we can give them a tastier alternative. Beyond Meat products can now be found in restaurants, cafes and supermarkets around the world. In 2021, Beyond Meat signed a three-year deal with McDonalds, KFC, Taco Bell and PIzza Hut to develop plant-based menu items.2Kelley, A. 2021. Beyond Meat lands big deals with McDonald’s, KFC, Taco Bell and Pizza Hut. The Hill. Available: https://thehill.com/changing-america/sustainability/climate-change/540684-beyond-meat-lands-big-deals-with-mcdonalds-kfc [Accessed 17 September 2021].

“I began to question the difference between animals in the agricultural system and the ones we kept as pets. And as I became an adult, I understood that it was a cultural, and not biological, justification for the difference.”1Park, A. 2019. Why We Don’t Need Animals to Keep Enjoying Meat. Time. Available: https://time.com/5601980/beyond-meat-ceo-ethan-brown-interview/ [Accessed 17 September 2021].

“There is no stark break between humans and the rest of life on Earth. There are gradations and degrees of difference and degrees of similarity, but you can’t sort of say ‘us-them’ in a scientific way… The reason that you think that way is because you want to create something that is separate because it’s easier to exploit.”3Darmiento, L. 2020. Ethan Brown went vegan but missed fast food. So he started a revolution. LA Times. Available: https://www.latimes.com/business/story/2020-01-08/beyond-meat-founder-ethan-brown [Accessed 17 September 2021].