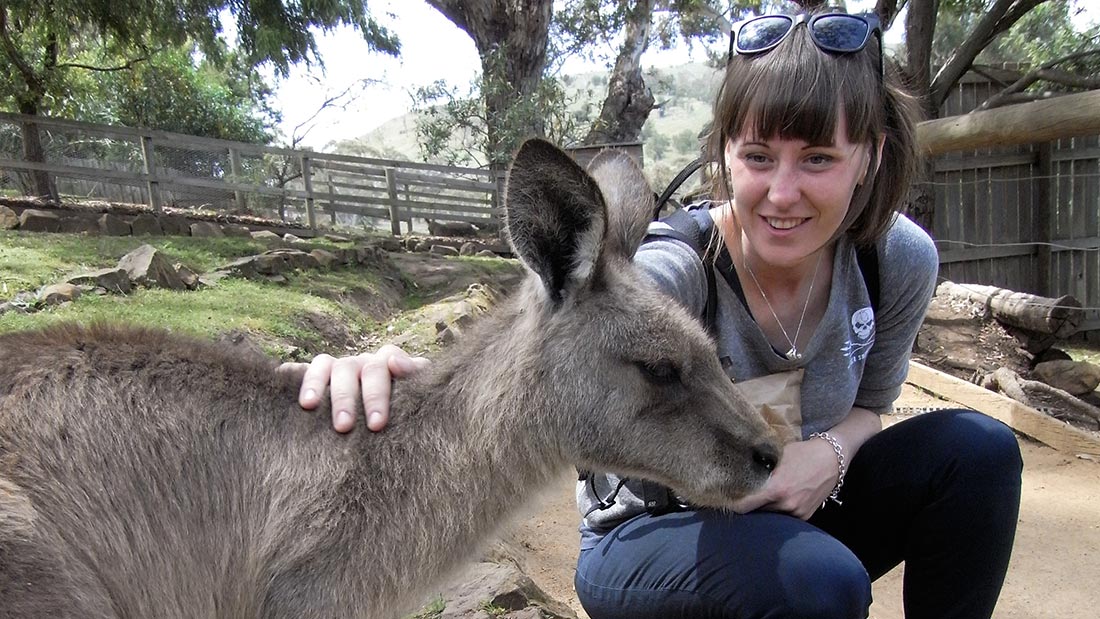 Lex, our Head of Investigations.

From Librarian to Ocean Warrior (and Head of Investigations at Viva!) 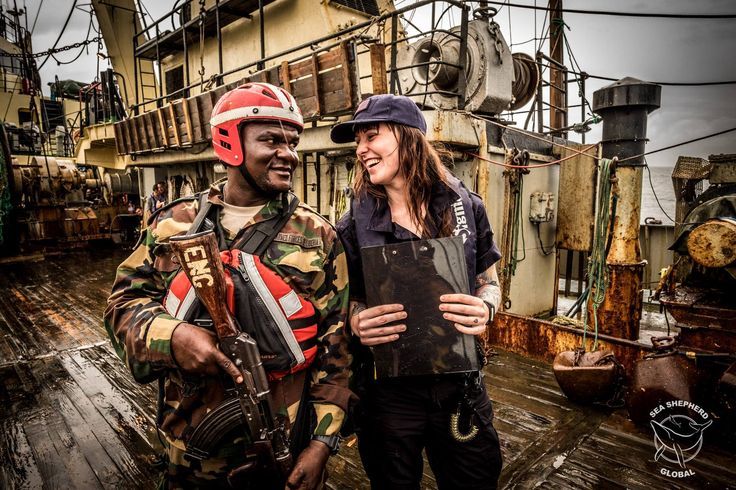 You can’t get further from the sea than Stoke-on-Trent and it was near here that Lex Rigby grew up. So there was no inherent ‘call of the sea’ from a coastal community that drove her to become first a deckhand and welder then ship manager and navigation officer aboard a Sea Shepherd vessel ploughing through the world’s oceans looking for trouble.

After a BA in media studies at Nottingham Trent and an MA in Librarianship at Sheffield, Lex’s CV is sprinkled with professional information manager posts – information officer at the University of Law, library resources coordinator, science librarian, in fact she’s a chartered member of the Library and Information Association. She had not become the journalist she’d originally anticipated but there is a bit of clue to her eventual destination in her list of leisure interests at that time – volunteer coordinator with the Sea Shepherd Marine Conservation Charity.

That started in 2006 when a northern bottlenose whale became stuck in the upper reaches of the River Thames in London: “She was a young female of a very rare species of deep-diving whales that are beaked and look much more like dolphins. They’re rarely seen in open water let alone in shallow rivers. Something had gone wrong and she was lost and people were talking excitedly about her but no one was talking about the continued decimation of whale populations worldwide. Ultimately, she died and her sad death changed my life as I became determined to do what I could to end the barbarity of whaling. 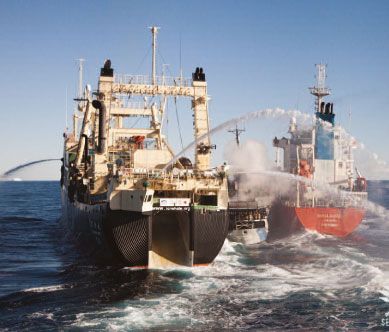 Barely visible between two much larger vessels, the Bob Barker in grave danger

“Throughout 2009, 2010 and 2011, I spent most of my free time hosting Sea Shepherd stalls at vegan fairs, music festivals and dive shows to help combat whaling. During this time, I developed a love of diving and life underwater and gained various certifications, which led me to Mozambique where I volunteered on a whale shark project, swimming up close and tagging them. It was here that I saw my first humpback whale breach the ocean surface and that’s a sight you just don’t forget. Magnificent!”

Sea Shepherd has several vessels devoted to protecting the oceans’ creatures and in 2011 one of them, the MV Steve Irwin (now retired), called in at London and, now back in the UK, Lex and other volunteers organised tours of the vessel to help raise funds for the next whale defence campaign. This was pivotal in the Lex Rigby story as the ‘Whale Wars’ that had motivated her were now almost a reality as she chatted to crew members about their adventures and their interventions to save whales from the harpoon.

“You just don’t have time to think about the danger!”

When the vessel moved down to Southampton for maintenance, Lex followed and laboured on as a volunteer deck hand, painting and greasing, wielding a chipping hammer to remove rust and red leading. The hard graft was no deterrent and she begged for a berth on a Sea Shepherd vessel. “How soon can you be in Australia?” came the reply.

“Five weeks later, November 3, 2011, I took a flight to Sydney, having secured a five-month work sabbatical and stepped on-board the MV Bob Barker. Not long after, I was heading out on my first Antarctic whale defence campaign in the unglamorous role of deck hand and learning how to sleep in monstrous 10 metre seas. It was a dream come true.” 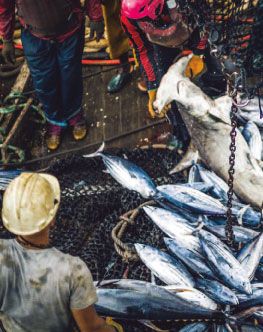 A hammerhead shark discarded as by-catch

This was the Southern Ocean, which can be utterly terrifying as it swirls around the globe between Australia, the tip of Argentina and the Antarctic ice cap almost uninterrupted, often producing mountainous seas. Whaling in these supposedly protected waters was carried out by Japan which operated in the usual way of whalers, with a large factory or mother ship and several much smaller whale catchers which do the killing and then transfer the whale to the factory ship to be butchered. The aim of the Bob Barker was to make this process as difficult as possible by harassing and hindering, placing themselves between the whales and the harpooners and streaming fouling lines to entangle the whalers’ propellers.

“It’s very sad that the first whale I saw in the Southern Ocean was one the smallest species that’s hunted – a minke whale (they average about 8 metres – 25ft – long). She looked enormous to me as she was being towed by a catcher boat across a sea swirling with her blood – a beautiful creature killed for nothing. The boat tried to intimidate us and the bow was brought charging to within a few feet of our deck. They are incredibly aggressive.”

Having been in the merchant navy, I can assure you that two vessels that close to each other is the epitome of danger on water that heaves and falls with the swell.  But there was to be worse. Lex Rigby is a champion of understatement! If she says: “That was a bit full on!” anyone else would likely say: “That was utterly bloody terrifying.” And I’m thinking of a particular incident where the Bob Barker, displacing just 800 tons, was literally sandwiched between a massive factory ship and an oil supply tanker, each displacing several thousand tons. Huge jets of water spout from their hoses as they deluge the Bob Barker and she almost disappears from sight in the spray, with just feet between the three of them. One tiny mishap and she could have been crushed and disappeared beneath the surface. Lex’s comment on it: “You just don’t have time to think about the danger!” 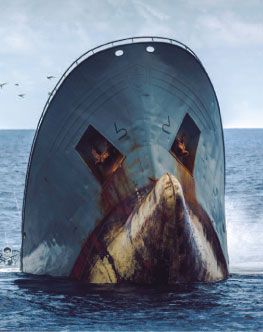 Whalers’ hatred of Sea Shepherd goes back a long way and their bogeyman is Captain Paul Watson, its founder. This charismatic man, with his flowing white hair and beard, was a co-founder of Greenpeace (although they try very hard to pretend he wasn’t) and he left to be more interventionist, founding Sea Shepherd in 1977. In 1979 he was responsible for sinking the pirate whaling vessel, Sierra, and in 1986 sabotaged the Icelandic whalers Hvalur 6 and Hvalur 7, effectively shutting down the country’s whaling operations for the next 16 years.

“Paul Watson is a highly intelligent man, utterly uncompromising and does whatever it takes to protect the ocean’s creatures – aggressive, non-violent action! People are in awe of him and when he recounts his extraordinary experiences, they listen!”

Gaining navigation qualifications, Lex moved from the deck to the bridge, from a cabin shared with three others to her own. “It was still incredibly small and Ilearnt to have nothing with me that didn’t serve a purpose. I’m still a bit like that and all my clothes at home are tightly rolled or folded into neat little squares in their drawers.” I can attest to her tidiness – her desk at work is a blank space, not so much as a paper clip to clutter it.

On different trips, the Bob Barker had other goals, such as monitoring and intervening in illegal fishing. One of the targets was a black-listed fishing vessel operating with impunity in Antarctica, fishing for Antarctic and Patagonian toothfish. This boat had the capacity to set gigantic drift nets that, one set, became a wall of death.

“Toothfish, or Chilean sea bass as it’s more glamorously known, is a type of cod icefish with white oily flesh that’s highly sort after. It’s a unique species, specifically adapted to its frozen environment with ‘anti-freeze type’ enzymes in its blood and lives up to about 1,500 metres below the surface.

“We identified a boat called the MV Thunder operating in what we called the ‘shadowlands’ of Antarctica which had been purple flagged by Interpol as a vessel of interest. As we approached, the skipper cut his nets adrift and took flight with us following – we had no idea that we had started on what was to be the longest maritime pursuit in history lasting 110 datys. There was little we could do while at sea so we simply had to follow until she put into port. 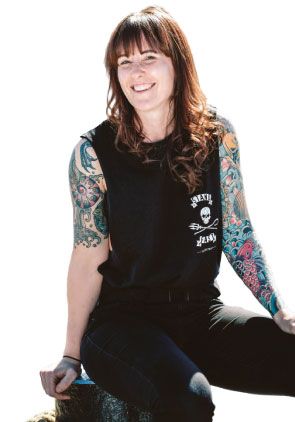 “It sounds exciting but it was arduous, the Thunder did everything to shake us off. It headed into pack ice and we had to follow; if it saw a squall, it would steer straight for it; and sometimes it would just sit there, motionless, on a calm sea for as long as 10 days, clearly hoping we would run out of supplies – but we waited.”

“The chase covered some 10,500 kilometres and finally came to an end off West Africa, when the skipper of the Thunder realised the game was up and scuttled his boat but there was no escape. He and both chief and second engineers were arrested and charged in Sao Tome. A different Sea Shepherd vessel navigated to where the Thunder had jettisoned her nets, found them and hauled them aboard, to prevent them continuing to catch and kill fish. They were 72 km long – so much netting, so much weight that our vessel was in danger of capsizing”.

Lex also worked on campaigns to arrest illegal fishermen off the West African coast, working with the coast guards of individual countries. “These seas are a biodiversity hot spot: you see superpods of dolphin more than a thousand strong, huge populations of various shark species and a whole range of other aquatic life”.

It is this biodiversity that has attracted fishing fleets from all over but particularly Spain, France and China. Some West African countries have tried to control the exploitation by licencing boats and trying to control what they catch.

“You cannot believe the scale of the fishing – as many as 60 boats operating in a small area with nets of two kilometres, scooping up entire schools of fish and they do it several times a day, day after day.

“There are numerous vessels operating without a licence or simply cheating. Skippers are supposed to log their by-catch, for example, and one, for a period of several days, had put in his log that four sharks had been accidentally caught. We had observed him and in just a single day he had caught and killed more than 110 sharks.” 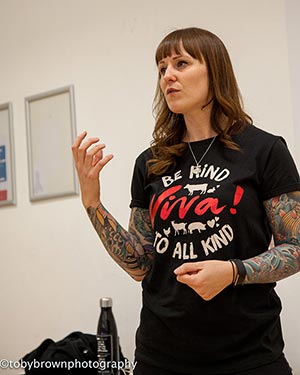 After nearly seven years at sea, Lex decided it was time for a more normal life and came ashore to be Viva!’s Head of Investigations (normal???) – but what times, what experiences.

“Most seafarers never experience collisions; witness ships sinking; carry out evasive manoeuvres to avoid prop-fouling lines or have to duck to avoid projectiles flung at you from harpoon ships; and they never need to hang over the side off the monkey deck to re-weld navigation lights damaged in violent collisions. Well, I’ve done it all.

“During my time as a Sea Shepherd crew member, I led Gabonese and Liberian boarding parties in patrolling their waters for illegal fishing and drove pods of pilot whales away from the Faroe Islands and back to the safety of open water, as well as participating in three Southern Ocean whale defence campaigns”.

Sea Shepherd’s anti-whaling campaigns resulted in the lives of over 6,000 whales being saved as Japan was incapable of meeting its declared quota of kills. Eventually, it had had enough and abandoned whaling in the Southern Ocean entirely.

“The experiences I have had are vivid, unique and will live with me forever. I am extremely proud of my time at sea”.