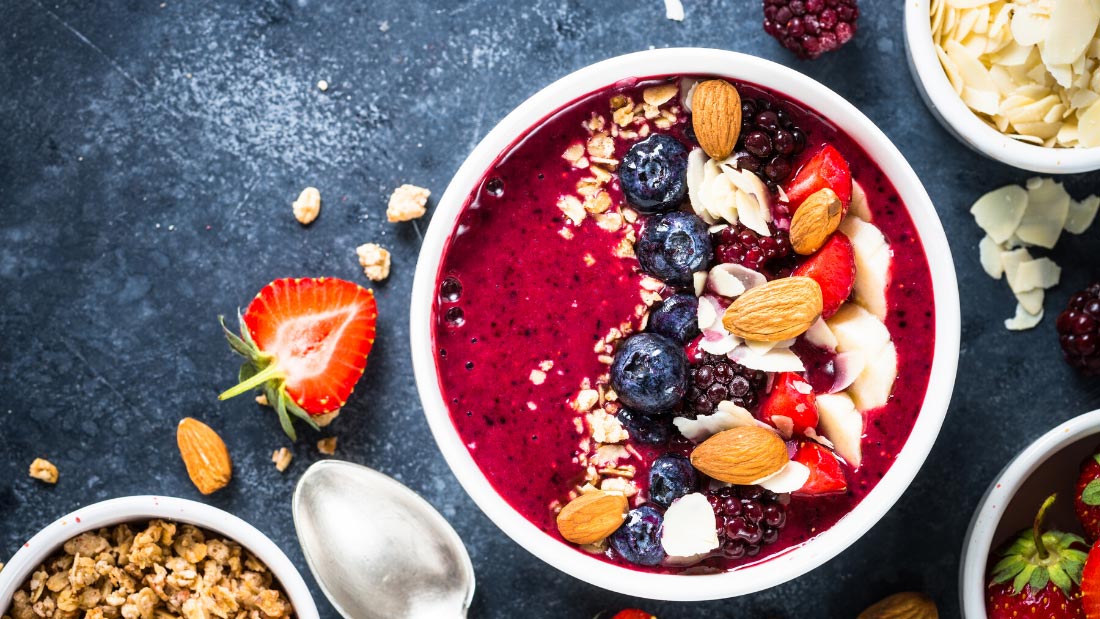 So you’ve decided to go vegan – that’s amazing! Your decision will help reduce animal suffering, protect the planet, save others and improve your own health. We have everything you need to get started.

Over the last ten years, a vegan revolution has been gathering pace and now it couldn’t be easier to be vegan. Supermarkets, pubs, cafes and restaurants are falling over themselves to get the widest range of vegan products. This is great news as it’s now easy to shop, eat and live vegan wherever you are.

When transitioning to veganism, it’s important to do it at your own pace and make sure you get the essential nutrients. So as tempting as it is, don’t just head for the vegan junk food! Keep reminding yourself why you’ve chosen to go vegan by reading up on veganism, visiting or volunteering for a sanctuary, watching positive documentaries, and appreciating the health benefits. 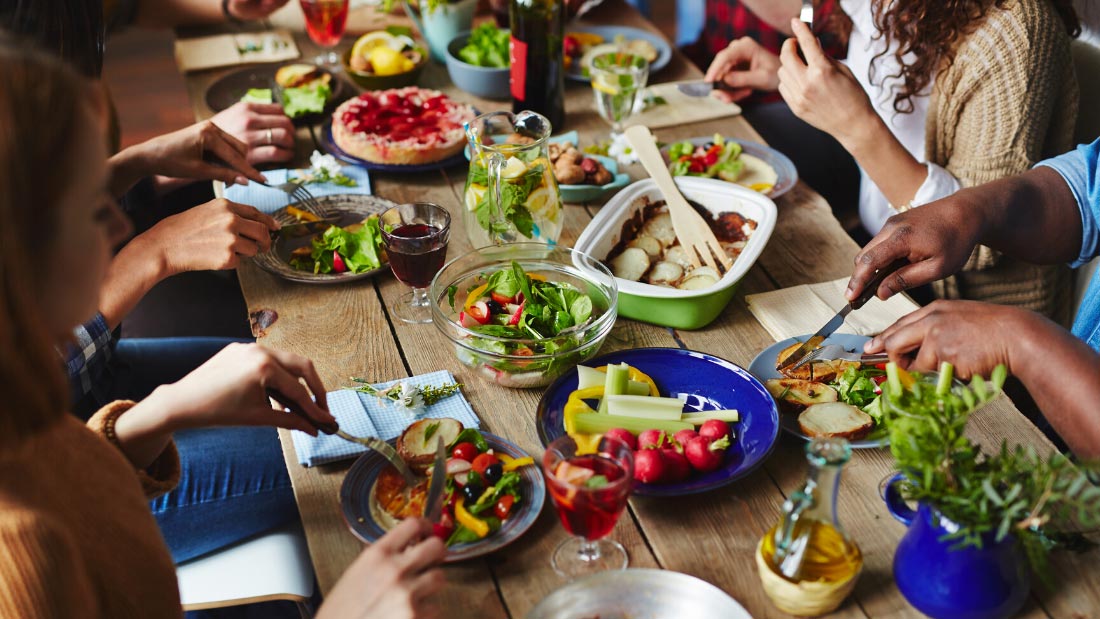 You would be surprised how easy it is to make your favourite meals and treats — such as spaghetti bolognese, chilli, stir-fries, pancakes, cakes — deliciously vegan!

The key is choosing healthy substitutes, such as tofu and other ‘mock meats’, beans, peas, lentils, wholegrain products (brown rice, oats, wholegrain bread), plenty of fruit and vegetables – including dark green leafy veggies, plant milks, nuts and seeds. Find which you like and then simply swap these into your favourite recipes.

Most people have about seven or eight dishes that they cook regularly and, surprise surprise, vegetarians and vegans are no different. 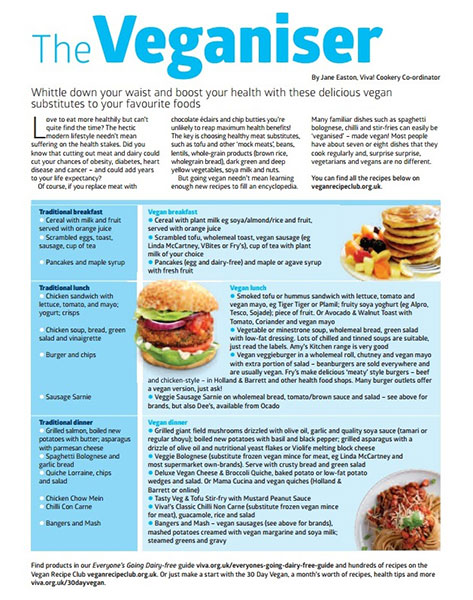 Download our guide to transforming your everyday meals into vegan feasts!

We also have tons of recipes on the Vegan Recipe Club and you can get an extra helping hand with our seven-day and thirty-day challenge, V7 and V30. 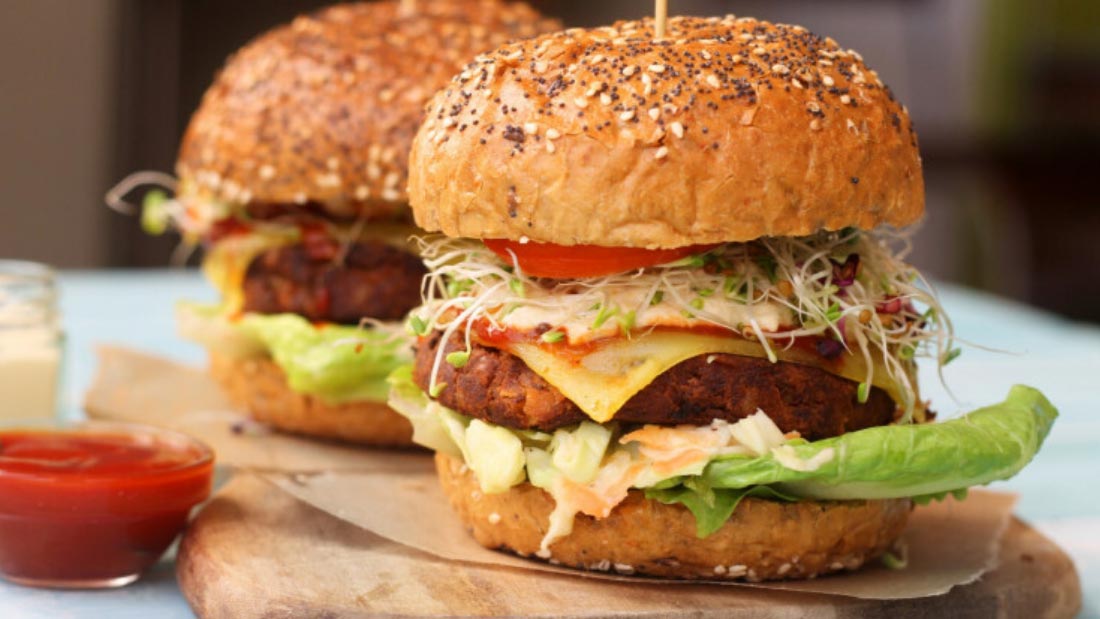 There’s no denying that when you go vegan, you sometimes find yourself craving products which are non-vegan, such as cheese. The good news is that these fade over time and nowadays, there are so many vegan products which can fulfil your cravings.

Here are some quick swaps:

Check out or ‘Vegan’s guide to‘ section for more info on alternatives! 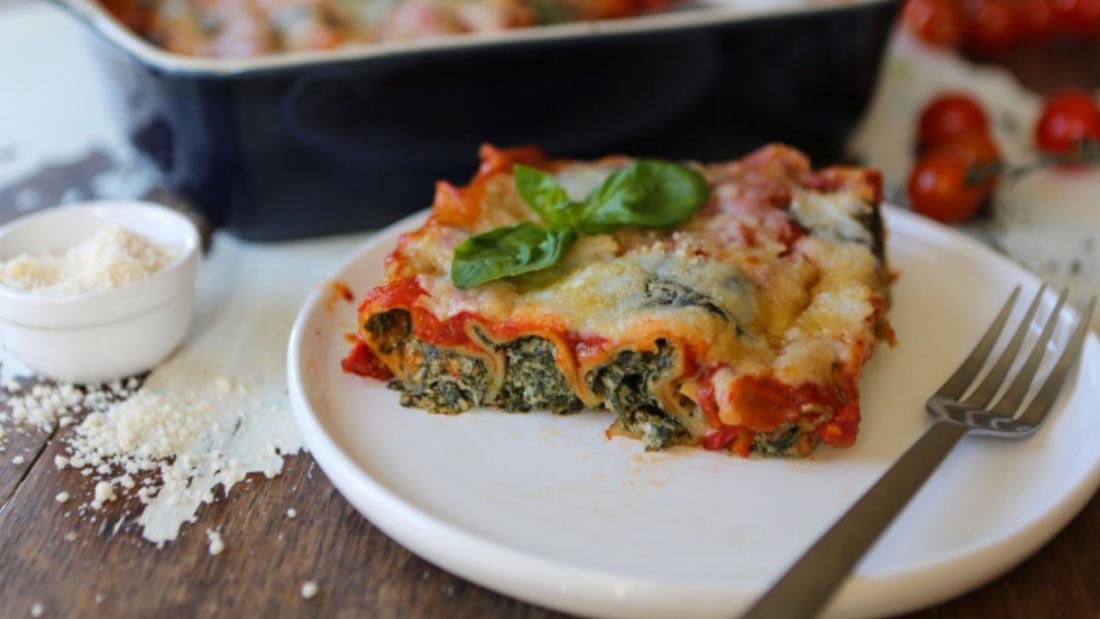 Be prepared to explore a whole new world of recipes! From curries to cakes, anything you can eat, we can make vegan. The best thing is that all our recipes are tried and tested. So you can trust that they’re going to be delicious.

There’s a popular technique to help with going vegan called ‘crowding’. It basically means rather than completely cutting out animal products all at once, you keep seeking out and trying new vegan dishes.When you find something you love, you save this product/recipe and incorporate it into your weekly dishes. Eventually you’ll replace all the animal products with new and delicious foods. 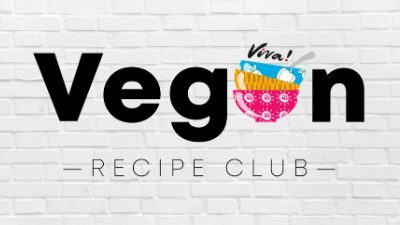 Hundreds of tried and tested recipes, delivered straight to you via email and app notifications. Check out Vegan Recipe Club. 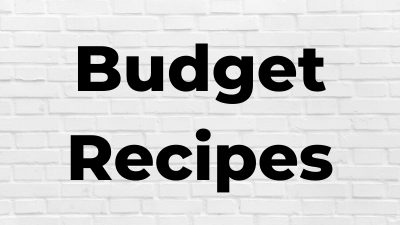 Vegan on a budget? We have a whole section dedicated to budget recipes. 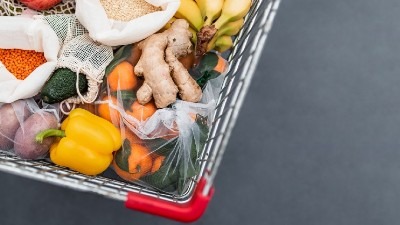 Never before has there been such an incredible range of vegan food options available, in such a wide variety of shops. Check out our guide to shopping vegan. 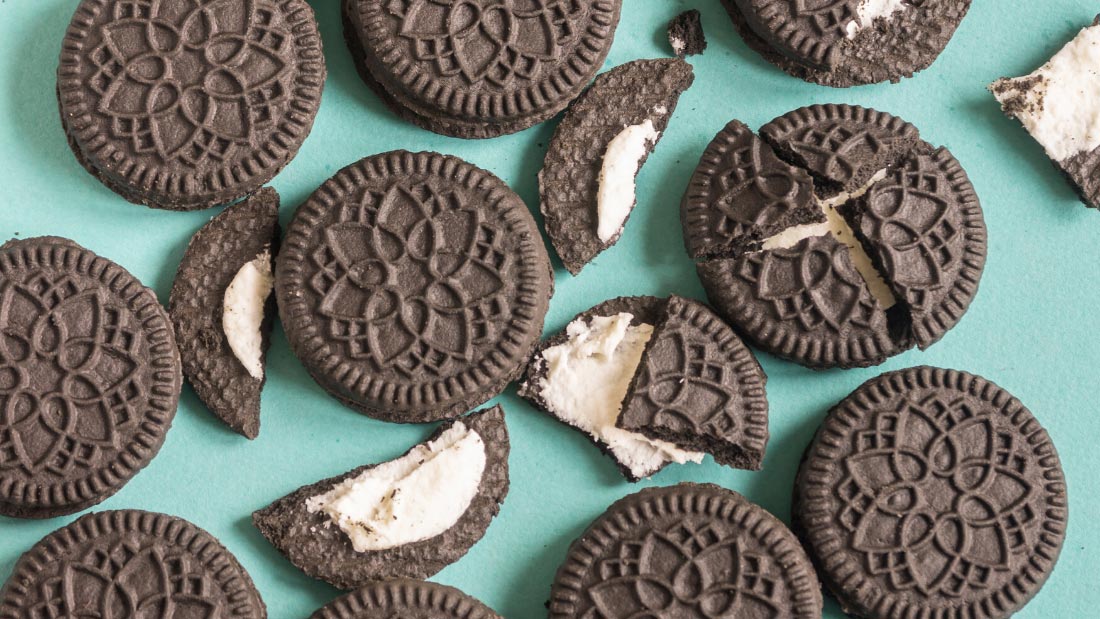 You would be surprised how many products are accidentally vegan. This means that although they are not branded as ‘vegan’ and you won’t find them down a free-from aisle, they are still free-from animal products which means you can enjoy them guilt-free!

Some of our favourite accidentally vegan products include Starburst, Skittles, Oreos, Hobnobs, Party Rings and Jelly Tots! But it’s not just sweets and snack foods, did you know Jus Rol Pastry is vegan? So is Bisto Original Gravy and some Pot Noodles! 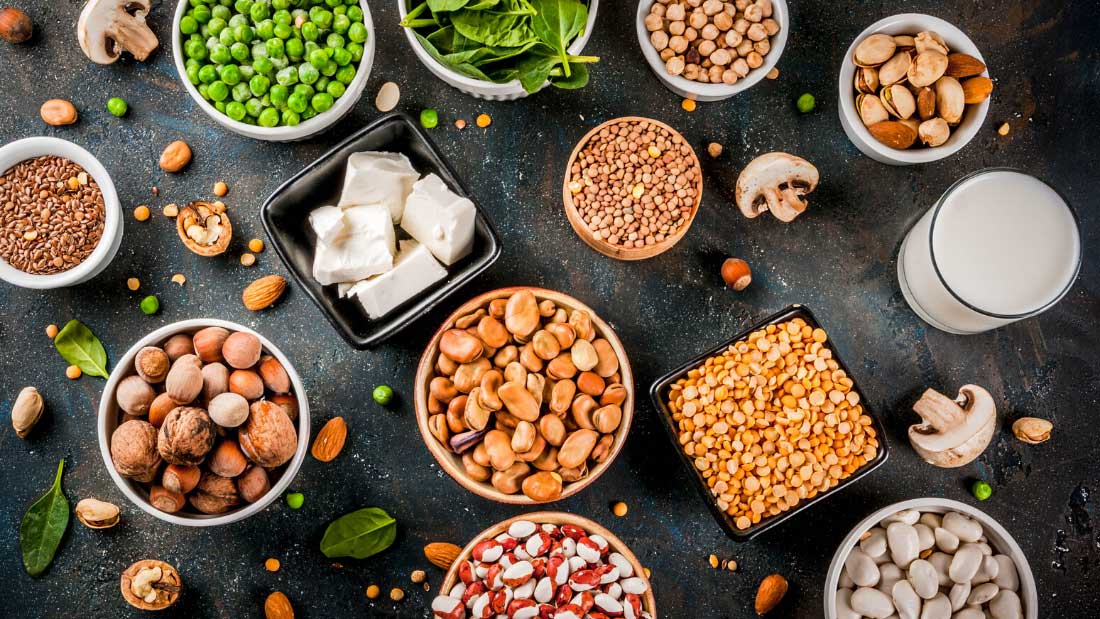 But Where Do You Get Your Protein?

Years of advertising and marketing of products with high protein content have created the myth that we constantly need to be looking for more and better sources of protein but nothing could be further from the truth.

Most people in Western societies have the opposite problem – far too much protein – and protein deficiency is almost unheard of. If you eat a healthy and varied vegan diet that provides enough calories, protein won’t be on your worry list!

On average, men should eat 55 grams and women 45 grams of protein daily. The best plant sources of protein include pulses (lentils, beans, chickpeas,peas and soya), nuts, seeds and whole grains (wholemeal bread,wholewheat pasta and brown rice). One Large serving of cooked tofu could provide up to half the protein you need in one day!

Got a question? We’ve got it covered. Check out our Vegan FAQs for more information.

A healthy vegan diet is one consisting mainly of fruit and vegetables, pulses, wholegrains, nuts and seeds. It is low in saturated fat and free from animal protein, cholesterol and hormones – all linked to disease. A vegan diet can provide all the nutrients required for all stages of life, including pregnancy, lactation, infancy, childhood, adolescence, elders and for athletes too! 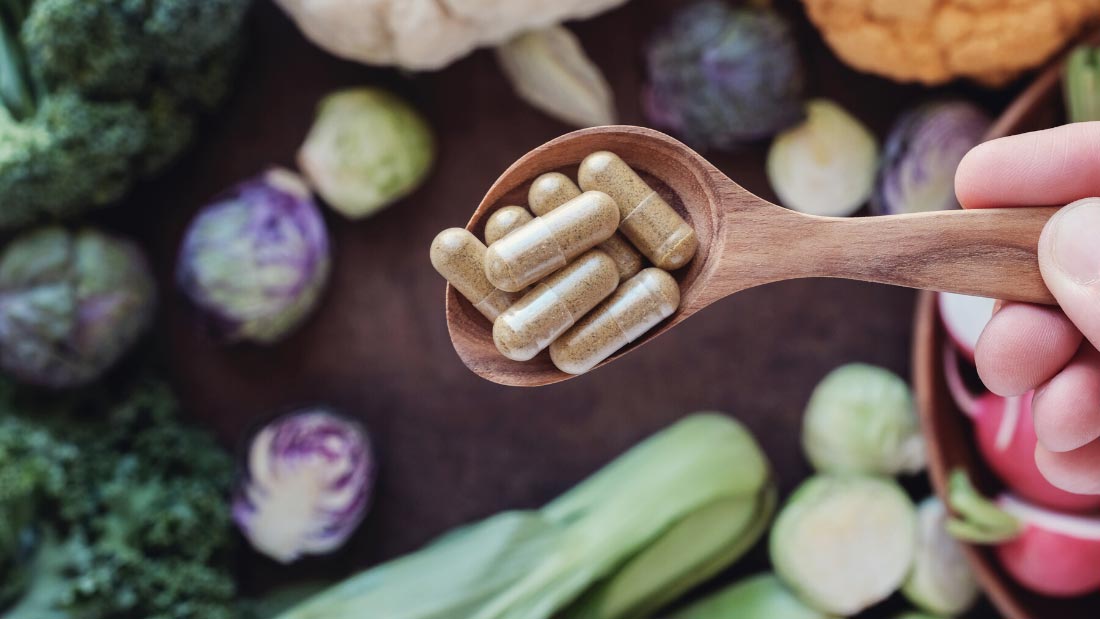 What supplements do I need to take?

B12 is made by bacteria in soil and water and to some extent bacteria in the gut (although production in the gut occurs in a different area to where absorption takes place). Traditionally,people, as well as farmed animals, gotB12 from eating food from the ground because B12 is made by the bacteria in the soil. However, now food production systems are so sanitised, we need to take a supplement. Animal products contain vitamin B12 because the animals are given this vitamin in their feed too. Cut out the middleman and get this vitamin straight from the source!

Adults need 10micrograms (*400 IU) of vitamin D a day. In spring and summer, most people in the UKget enough vitamin D through the action of sunlight on the skin, but in the winter months a supplement is required for everyone, not just vegans. Those who stay indoors or are housebound, people who live in an institution, such as a care home, those who cover most of their skin when outdoors and people with dark skin (of African, Afro-Caribbean or South Asian origin) may need to take a supplement all year round.The best plant sources include vitamin D-fortified plant-based milks, vegetable margarines and breakfast cereals (if labelled suitable for vegans) and vitamin D mushrooms (check the label). 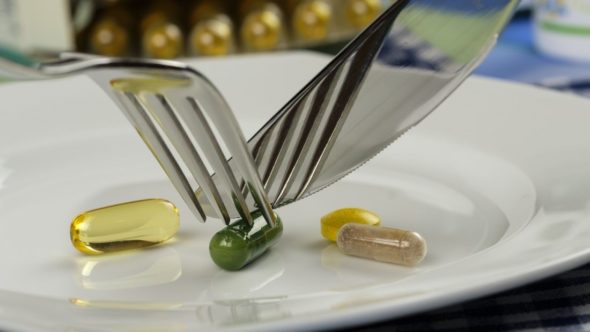 According to some ‘health’ writers vegan diets are deficient in vital nutrients. So, do vegans need to become pill-poppers to stay healthy?

Other key nutrients to consider are iodine, calcium, iron, zinc, selenium and Vitamin A. You can find all of that information in our A-Z of nutrients.

Order our handy wallcharts. From iron, calcium and protein, to egg replacements, to daily reminders of vitamins and nutrients. These charts summarise everything you need to know about vegan nutrition, in an easy to digest format. 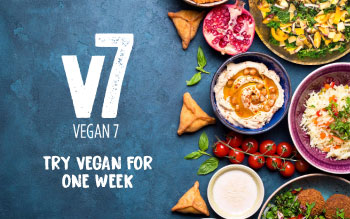 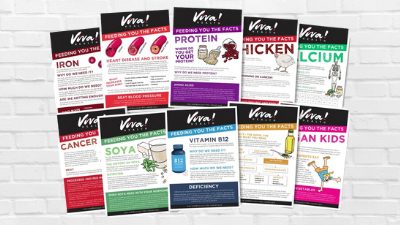 Vegan FAQs
Read
Share it
Scroll up
We use cookies on our website to give you the most relevant experience by remembering your preferences and repeat visits. By clicking “Accept All”, you consent to the use of ALL the cookies. However, you may visit "Cookie Settings" to provide a controlled consent. More info at https://viva.org.uk/terms/
Cookie SettingsAccept All
Manage consent