Home » Health » Why animal products harm » Meat the truth » Haem iron – too much of a good thing?

Haem iron – too much of a good thing? 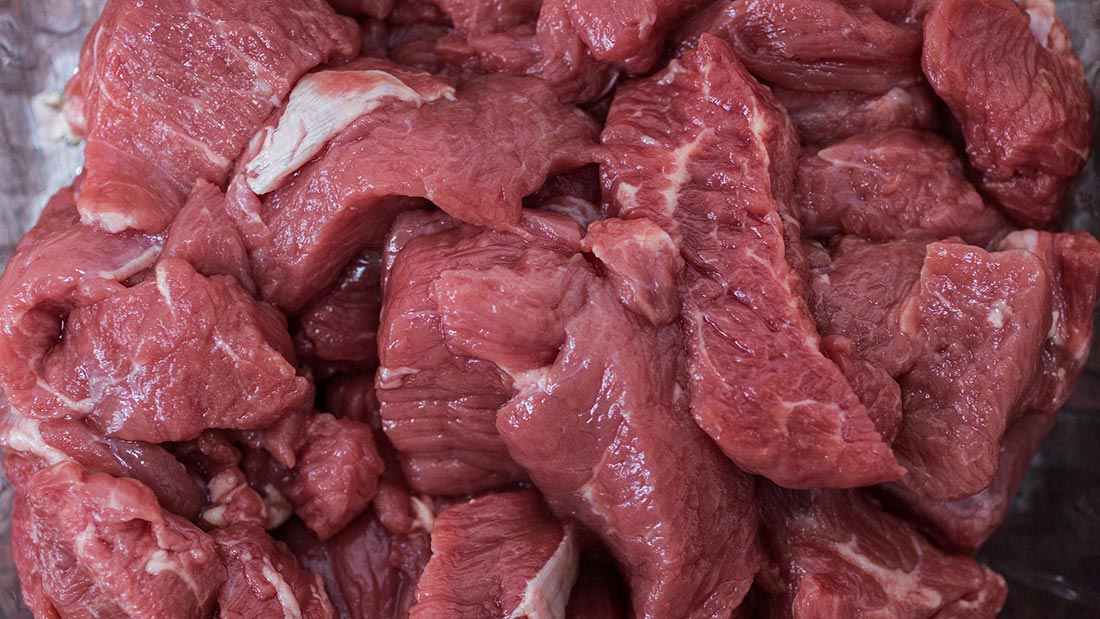 Not all iron is created equal! There are two types of iron in food:

The haem iron content of different types of meat varies widely. The highest levels are seen in red and processed meat (hamburgers, steak, pork and ham) and the lowest levels in chicken (Cross et al., 2012). The haem iron content of red meat is higher simply because it contains more myoglobin, transporting oxygen to muscles. Put simply, muscles used more frequently are darker (although there are also differences between species). So while chicken meat contains less haem than beef, pork or lamb, the haem content of chicken’s thigh meat is considerably higher than breast meat.

Non-haem iron makes up the other half of the iron in animal tissue and all of the iron found in plant foods, dairy foods (which contain a very small amount) and eggs. Most of the iron in the diet is non-haem; the 2003 National Diet and Nutrition Survey (NDNS) found that non-haem iron contributed 94 per cent of dietary iron in the UK (Henderson et al., 2003). The other six per cent of dietary iron was haem iron deriving mainly from the haemoglobin and myoglobin of meat (Johnston et al., 2007).

Iron overload can be caused by an inherited genetic condition called hereditary haemochromatosis, which affects one in 250 people of Northern European descent (Burke et al., 2000). Normally the liver stores a small amount of iron to make new red blood cells. If you absorb excessive amounts of iron (as some people with this condition do) it builds up in the liver and is deposited in other tissues and organs. Iron overload may cause uncomfortable symptoms such as nausea, abdominal pain, constipation and joint pain. It can also lead to liver damage, heart failure and diabetes. Men are more at risk from haemochromatosis because women regularly lose blood, and therefore iron, during menstruation. This condition illustrates how you can have too much of a good thing.

Haem iron intake in the UK is in decline. A study looking at data from the Medical Research Council National Survey of Health and Development (also known as the 1946 British Birth Cohort) investigated haem and non-haem iron intakes among adults in the UK over a period of 17 years from 1982-1999. Results showed a steady decline in haem iron intake from beef, pork and lamb but a rise in haem iron from poultry (Johnston et al., 2007). This corresponds with Defra’s data discussed previously showing how the consumption of sheep, cattle and pigs in the UK has declined in recent years while the consumption of poultry has increased. The authors suggest that modern farming methods may also be contributing to the falling level of haem iron in meat as there is evidence that intensive farming results in a lower mineral content of meat (Purchas and Busboom, 2005).

The vast majority of iron in the diet is non-haem iron with just five to 10 per cent coming from haem iron in diets containing meat (Beck et al., 2014). Both types of iron are absorbed in the small intestine, but by different mechanisms. Haem iron is more bioavailable or easily absorbed into the body; 20-30 per cent of haem iron eaten is absorbed while one to 10 per cent of non-haem iron absorbed (Beck et al., 2014). Non-haem iron absorption is more variable because it is subject to a range of influences. It can be influenced by iron status (how much iron there already is in the body) and various dietary factors such as tannins, phytates, calcium, polyphenols and dietary fibre (Johnston et al., 2007). The dietary factors that help or hinder iron absorption are discussed later.

Despite considerable research, the precise mechanism by which haem iron is absorbed remains unclear. It is thought that it is transported across the intestinal membrane (gut wall) into the blood intact where the iron component is removed to enter a common pool of iron along with non-haem iron (Geissler and Powers, 2005). Absorption of haem iron is less affected by iron status or enhancers and inhibitors in the diet than non-haem iron. So haem iron is more easily absorbed and is associated with significantly higher iron stores in the body (Fleming et al., 2002; Liu et al., 2003). The more meat (haem iron) you eat, the higher the level of iron in your blood will be. However, a high absorption rate and/or high iron stores are not necessarily a good thing as the body has no mechanism for disposing of excess iron. In other words, iron from plant foods is more beneficial to the body because its absorption remains safely regulated, whereas, iron from animal sources can accumulate to levels which could be harmful.

Too much iron can have many detrimental effects activating: oxidative responsive transcription factors (molecules in the body which can switch on cancer genes), pro-inflammatory cytokines (lack of regulation of these is linked to atherosclerosis and cancer) and iron-induced hypoxia signalling – a classical feature of cancer (WCRF/AICR, 2007). There are detrimental effects relating to haem iron specifically which are not affected by non-haem iron (Cross et al., 2012). The suggested mechanisms underlying the harmful effects of haem iron are based on its ability to contribute to the formation of free radicals and N-nitroso compounds or NOCs (Bastide et al., 2011).

Free radicals are unstable and highly reactive molecules capable of damaging biologically important molecules such as DNA, proteins, carbohydrates and lipids (Lobo et al., 2010). The end result can be the generation of toxic molecules that are capable of promoting cancer.

NOCs are produced in the stomach and bowel of people who eat large amounts of red meat (WCRF/AICR, 2007). NOCs may damage cellular DNA, potentially leading to certain cancers. Many NOCs are carcinogens and there is supporting evidence for a role of NOCs in gastric, oesophageal, nasopharyngeal and colon cancers (Loh et al., 2011).

The main sources of external exposure to NOCs are cigarette smoke and diet, particularly processed (nitrite-treated) meats. After eating red and processed meat, the large intestine is rich in nitrogen residues from protein metabolism. These residues may be used by colonic bacteria to produce NOCs. One study of 21 healthy male volunteers, found levels of NOCs on a high red meat diet (420g per day) were significantly higher than on a low meat diet (60g per day) but were no higher when an equivalent amount of vegetable protein was eaten (Cross et al., 2003).

An eight mg supplement of haem iron also increased faecal NOCs compared with the low meat diet, but 35mg ferrous (non-haem) iron had no effect. The finding that haem iron behaves differently suggests that in addition to the bacterial NOC generation that occurs in the gut, the haem iron also contributes to a chemical catalysis (the speeding up of a chemical reaction) that is responsible for the dose-dependent effect of red meat on increasing NOC production in the gut. In other words, haem iron act in multiple ways to drive up NOC production. The authors concluded that if the NOC formed endogenously in the intestine, as a result of haem consumption, is shown to be mutagenic or carcinogenic, this might explain the association between red meat consumption and large bowel cancer risk (Cross et al., 2003).

There exists a widespread conviction that the iron from red meat is somehow superior to that from plant foods. This is what is still written in some nutrition and dietetic textbooks. Numerous studies now show that people with high iron stores suffer a higher incidence of heart disease, diabetes and certain cancers.