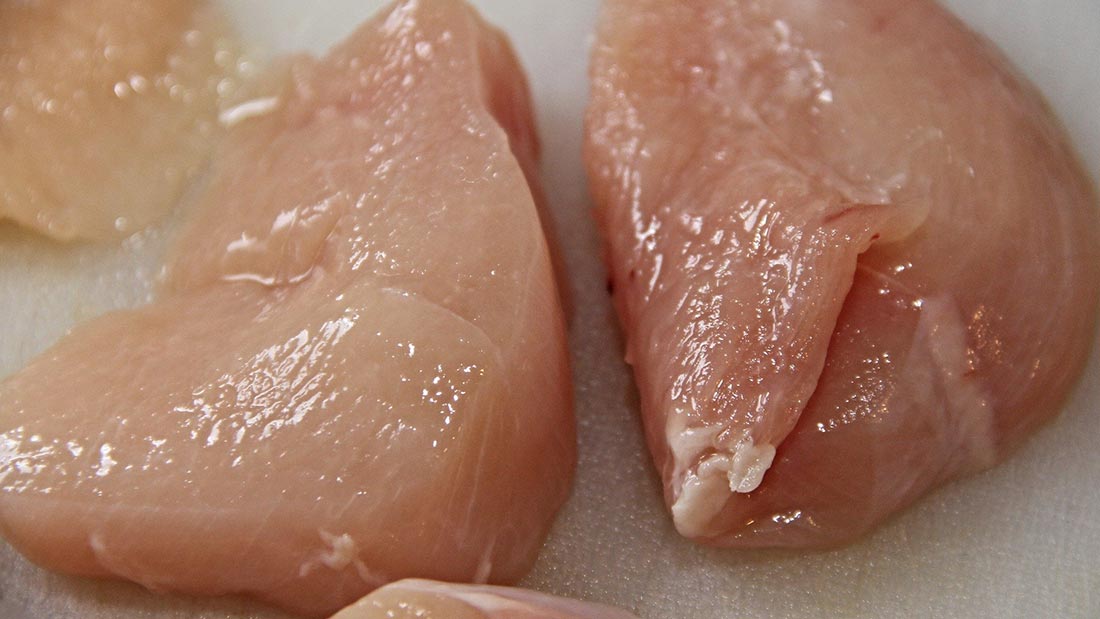 The vast majority of cases of food poisoning are caused by meat, chicken, eggs, fish or dairy. If plant foods are to blame, it is usually because they are contaminated with animal excreta, human sewerage or handled by someone with dirty hands. Many cases go unrecognised and unreported and it may be that one in every four people experience food poisoning every year in the UK. Chicken is the most common cause, responsible for around half of all cases. Listeria is the most fatal, resulting in death in around a third of cases. The drive for cheap meat and ever-bigger, industrialised factory farms is a major contributory factor. Mechanical evisceration (removal of internal organs) of poultry has been shown to increase the risk of faecal matter contaminating the meat, which is probably why around 70 per cent of supermarket chickens in the UK are contaminated with Campylobacter. Beef and pork are affected in this way too. Going vegetarian or vegan is no guarantee that you will avoid food poisoning, but it certainly does lower the risk substantially.

Food poisoning is caused by eating contaminated food. In general, most people get better within a few days without treatment. Occasionally it can lead to serious or long-term conditions or even death. Food poisoning is more likely to result in serious consequences in vulnerable people than healthy adults. This includes the very young, the very old and the immune-compromised. People with some vulnerability may account for nearly 20 per cent of the population in the UK and the US (Lund, 2015).

Symptoms of food poisoning usually begin within one or two days of eating contaminated food, although it may start after just a few hours or even several weeks later. If the poisoning is caused by a bacterial infection, it can take 12-72 hours for toxins from the bacteria to build up. The main symptoms include: feeling sick (nausea), vomiting, diarrhoea, stomach cramps (tummy ache), a lack of energy and weakness, loss of appetite, a high temperature (fever), aching muscles and chills (NHS Choices, 2015e).

In most cases of food poisoning, the food is contaminated by bacteria such as Salmonella or Escherichia coli, or a virus such as the norovirus. Food can become unsafe by not cooking it thoroughly (especially meat), not storing it correctly if it needs to be chilled (meat again), leaving cooked food for too long at warm temperatures, not sufficiently reheating previously cooked food or being past its ‘use by’ or ‘best before’ date. It may become contaminated through poor personal hygiene (being handled by someone who is ill or has dirty hands) or cross-contamination from other food.

Most cases of food poisoning are related to the consumption of animal products (meat, poultry, eggs, fish and dairy) as plants tend not to harbour the types of bacteria capable of causing food poisoning in humans. If plant foods do cause food poisoning it is generally because they have been contaminated with animal excreta, human sewerage or handled with dirty hands during preparation.

In 2000, the UK FSA published the Report of the Study of Infectious Intestinal Disease in England – IID1 (FSA, 2000). It combined data from national surveillance centres with a comprehensive review of the current scientific literature. The aim was to estimate the extent and causes of infectious intestinal disease (food poisoning) in England. Results suggested that one in five of the population of England (nine and a half million people) suffer food poisoning every year and that two per cent of the population (one and a half million) visit their GP with symptoms.

In 2011, the Second Study of Infectious Intestinal Disease in the Community (IID2) updated IID1 and looked at the UK as a whole. It set out to assess what changes had occurred since the original study, in terms of numbers of people affected and individual pathogens (FSA, 2011a). They estimated that one in four (17 million) people suffer from food poisoning every year in the UK (43 per cent higher than in IID1). However, the number of people visiting their GP was around 50 per cent lower, just two per cent of the population (one million). So it seems more cases were going unrecognised and unreported; they suggested that for every case reported to national surveillance centres, there were 147 unreported cases.

Poultry was found to be the most common food associated with food poisoning in the UK with an estimated 244,000 cases, 34,000 GP visits and 870 hospital admissions. Around half of all cases and GP visits and a fifth of hospital admissions for foodborne illness are attributable to poultry contamination (FSA, 2014). The FSA put Campylobacter at the top of their priority list as they considered it to be the biggest food safety problem affecting people in the UK. In 2014, they launched a campaign telling people not to wash raw chicken, warning that splashed water droplets can spread Campylobacter bacteria on to human skin, work surfaces, clothing and cooking equipment.

Is factory farming making you sick?

The ever-increasing drive to lower the cost of meat inevitably results in more intensive farming methods. The WHO highlighted how safe disposal of manure from large-scale animal and poultry production facilities is a growing food safety problem in much of the world, as manure frequently contains pathogens (WHO/FAO, 2002). For example, in the US, the consolidation of industrial livestock production has led to the fast production of huge amounts of cheap meat. But cheap meat comes at a cost: millions of tons of manure and toxic pollutants which threaten important waterways.

US environmental advocacy organisation Environment America, say that the five major animal agribusinesses (Tyson, JBS, Cargill, Smithfield and Perdue) produce a combined 162,936,695 tons of manure every year! (Environment America, 2016). Environment America said: “From slaughtering plants run by the company or its subsidiaries, Tyson discharged over 20 million pounds of toxic pollutants to the nation’s waters in 2014 – more by volume than even Exxon Mobil or Dupont – according to data the company reported to the federal Toxics Release Inventory. Most of the company’s toxic discharges are nitrates, which are linked to blue baby syndrome and some forms of cancer”.

Agriculture is the probable cause for making more than 145,000 miles of rivers and streams across the US too polluted for swimming, drinking or maintaining healthy wildlife, according to the US Environmental Protection Agency.

The drive for cheap meat has led us into trouble in other ways too. Another problem that recently emerged was how mechanical evisceration (removal of internal organs) of poultry can result in the rupturing of the digestive tracts and the spilling of faecal matter onto the skin of the animal (Cho et al., 2009). This is obviously a concern with poultry, as people eat the skin. Companies selling this type of equipment boast that their machines can deal with high processing capacities, for example, of up to 13,500 chickens per hour!

Researchers at the University of Minnesota looked for the presence of an antibiotic-resistant strain of E. coli in 1,648 different food samples (Johnson et al., 2005). They found contamination in 69 per cent of pork and beef and 92 per cent of poultry samples. The authors said that the high prevalence of antibiotic-resistant E. coli found in meat products is consistent with contamination of animal carcasses with the animal’s own faecal flora (gut bacteria) during slaughter and processing and with use of antimicrobial agents in food-animal production. This is probably why 73 per cent of 1,032 samples of fresh shop-bought chicken taken from large retail outlets, small independent stores and butchers in the UK, between February 2014 and February 2015, tested positive for Campylobacter (FSA, 2015).

The FSA recently repeated the survey, this time testing 1,009 samples of fresh whole chilled UK-produced chickens taken between January and March 2016 (FSA, 2016). They found that Campylobacter was present on 50 per cent of chicken samples. At first glance this might look like good news – down from 76 per cent in the same quarter of the previous year. However, the FSA say that one of the reasons the survey results were lower is because of the decision taken by a number of retailers and their suppliers to remove neck skin from the birds before they are sold. The neck skin is the most contaminated part of the chicken. It is also the part of the bird that the FSA have been testing which they say means that comparisons with previous results are not as reliable as they would like. Therefore, they have stopped this survey and began another in 2016, with a different method of testing Campylobacter levels on chicken. Some might call that dodging a bullet!

Table 2.0 Foods associated with foodborne disease in the UK, Canada, Denmark, the Netherlands, the US and the EU. Source: Lund et al., 2015.

Table 2.0 shows an estimate of the main pathogen-food combinations, based on studies included in the FSA’s extension to the IID2 Study. Foods of animal origin, particularly meat and meat products, are associated with the vast majority of cases of foodborne illness (Lund et al., 2015). While chicken is the clear front-runner responsible for the largest number of food poisoning cases, it is not the main cause of food poisoning death. In 2011, the FSA said that Listeria monocytogenes was responsible for the largest number of food poisoning deaths in the UK (causing more deaths than Salmonella and E. coli O157 combined). Although relatively rare, listeriosis (listeria infection) can cause severe illness and invariably requires hospitalisation; a third of cases are thought to result in death (FSA, 2011).

Listeria bacteria may be found in a range of chilled, ‘ready-to-eat’ foods, including pre-packed sandwiches, cooked sliced meats, pâté and soft cheeses (such as Brie or Camembert). These foods should be eaten by their ‘use-by’ dates. This is particularly important for pregnant women, because listeriosis in pregnancy can cause complications and can result in miscarriage.

E. coli is usually harmless but it can be serious and the strain E. coli O157 can cause kidney failure and death. Most cases of E. coli food poisoning occur after eating undercooked beef (particularly mince, burgers and meatballs) or drinking unpasteurised milk. The incubation period for food poisoning caused by E. coli is typically one to eight days and the symptoms may last for a few days or weeks.

Of course there are many other bugs (bacteria, viruses and parasites) that cause foodborne illness. People of a certain age remember the uproar in the late 1980s caused when the then Health Minister Edwina Currie said that most egg production in this country was affected with Salmonella. Salmonella bacteria are often found in raw or undercooked meat (especially poultry, pork and beef), as well as dairy products and eggs. Indeed, poultry, pigs and cattle represent an important source of Salmonella even though they may show no sign of infection.