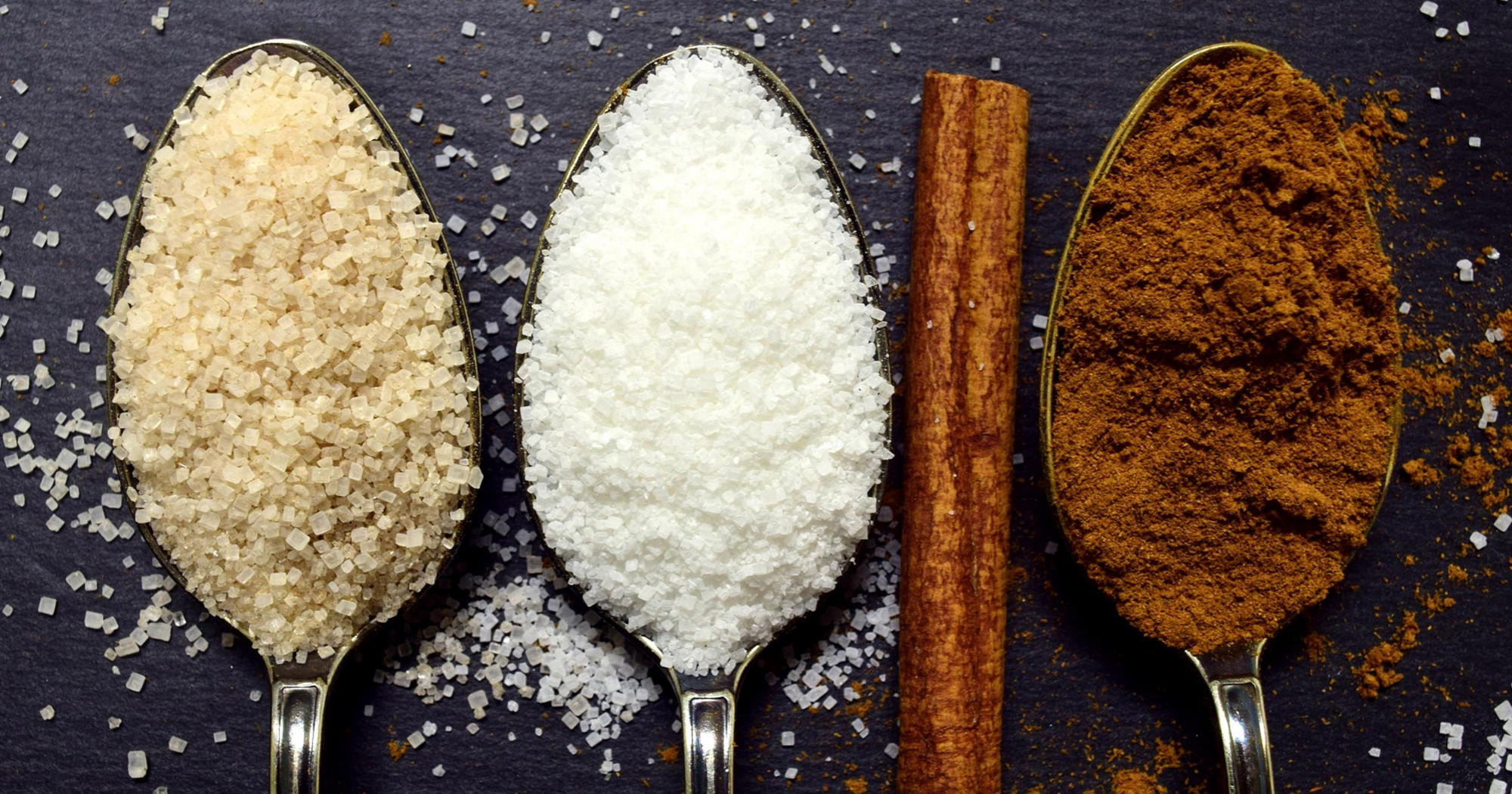 Talking about sugar, sweeteners and syrups is like entering a very sticky minefield because there are so many options and countless opinions on what’s best and worst. Bear in mind that any sweetener is an extract and what follows applies only to these concentrated extracts, not to naturally occurring sugars such as in fruit.

Basic sugar molecules help to decode what’s what in terms of sweet components. Glucose, fructose and sucrose are all simple sugars that can’t be distinguished by taste alone – they’re all very sweet.

​Glucose is a simple sugar naturally present in many foods and serves as the main source of energy for our metabolism. When we talk about blood sugar, it means glucose and in response to eating glucose, our bodies release the hormone insulin to let it through to our tissues and cells. Excess glucose that can’t be used immediately is stored in the form of glycogen in our muscles but can also be turned into fat.

Fructose is also a simple sugar and is found naturally in fruits and vegetables. Your body doesn’t use it as the main energy source and it can’t be absorbed in the same way as glucose – it first has to be processed by the liver. That’s why it doesn’t produce high blood sugar levels and doesn’t rely on insulin but can still cause weight gain if eaten in excess. Many processed food and drinks manufacturers use high-fructose corn syrup and that’s certainly not a healthy option.

Sucrose, commonly known as table sugar, is a simple sugar made up of glucose and fructose. It’s usually extracted from sugar cane or sugar beet. When you eat sucrose, the enzymes in your gut split the molecule into glucose and fructose and they then each follow their own absorption route – glucose increases your blood sugar levels, whilst fructose is processed and may be turned into fat. Eating more than just small amounts can cause weight gain.

Before sugar cane becomes sugar, it goes through several stages of processing to extract the sugar from the plant. One of these stages is a thick, syrupy liquid that still contains many vitamins and minerals naturally present in the plant – molasses.

Sugar beet molasses is not very palatable so the stuff you get in shops is always made from sugar cane. It contains a lot of sugar but is also rich in iron, magnesium, potassium and manganese. If you like the taste of molasses, use it to sweeten biscuits or other baked goods – it’s certainly healthier than other sweeteners!

Even though these are varieties of the same thing, there can be huge differences. White sugar is essentially just sucrose, processed to strip off everything else – it should be left to special occasions only as it offers no health benefits whatsoever. Brown sugar – unless it carries a specification – is not much better as it’s simply just white sugar with a tiny bit of molasses added to give it the beige colour.

Raw cane sugar and its many varieties (such as muscovado, turbinado or demerara) are somewhat healthier as they haven’t been so highly processed and retain some natural vitamins and minerals.

Agave syrup is now widely available and sold as a healthy sweetener. Is the reputation justly earned? Agave syrup contains most of its sugars in the form of fructose, which is absorbed more slowly than glucose and doesn’t cause blood sugar spikes. However, that’s about the only benefit. Despite ‘natural’ claims, it’s still a very processed product and with minimal amounts of nutrients.

Golden syrup is nutrionally no different to sugar. The only difference is that golden syrup is liquid because it contains invert sugars – made by splitting sucrose (sugar) into its component molecules of glucose and fructose. This syrup is then mixed with sucrose syrup to achieve the final product. Both sugar and golden syrup contain 50 per cent glucose and 50 per cent fructose – same thing!

Maple syrup is made by extracting maple sap and boiling it to reduce water content to achieve its syrupy consistency. The main component in the finished product is sucrose (sugar) and it also contains small amounts of the component sugar molecules – glucose and fructose. Maple syrup is surprisingly rich in riboflavin (vitamin B2), the mineral manganese and contains some antioxidants but its high sugar content doesn’t make it a healthy sweetener; it’s only slightly healthier than regular sugar.

Rice syrup is made from rice starch and is clear. It is broken down in the body into glucose – pure sugar – and is not a healthy alternative.

Mainly composed of fructose but also contains fibre, protein, some B vitamins, iron, calcium, magnesium, potassium and antioxidants. A healthier alternative to other syrups but too much can contribute to weight gain.

This syrup seems too good to be true! It’s sweet but two thirds of its weight is the fibre inulin and less than five percent are sugars, so it’s low-calorie and doesn’t raise blood sugar levels. We can’t digest inulin but it’s used by the good bacteria in your gut and while this is a good thing, too much can cause bloating and people with IBS may need to test it to see if they can tolerate it.

Also called inulin syrup, it is great with granola, drinks or pancakes. Stick to small amounts and you should be fine.

Stevia is a plant with leaves containing compounds known as steviol glycosides, which taste very sweet but don’t contain any calories. Most stevia-based sweeteners sold in shops and used in products are purified stevia leaf extracts, which are 200 to 300 times sweeter than sugar.

Recent extensive tests revealed that stevia is safe to use for people of all ages and that your body rapidly breaks the molecules down without storing them. It can be a smart choice if you’re in need of sweetening your life in a healthy way but, perhaps ironically, stevia can have a bitter aftertaste which is why it’s best mixed with other sweeteners.

Maltitol is a sugar derivative which has 75–90 per cent of the sweetness of sugar but half the calories. It starts off as maltose, a sugar made up of two glucose molecules obtained from starch and undergoes a hydrogenation process resulting in the final product.

Maltitol is often used in sweets, chewing gum, chocolates, baked foods and ice cream as it’s not broken down by the enzymes in our saliva (unlike sugar) and it doesn’t promote tooth decay. Because it’s absorbed more slowly than sugar, it has a lesser impact on your blood sugar. However, maltitol has a laxative effect if eaten in more than small amounts, causing diarrhoea and severe flatulence!

This low-calorie sweetener, extracted from a variety of plants, has been gaining in popularity as it’s fairly natural and doesn’t promote tooth decay.

Xylitol is only partially absorbed after you consume it and what little gets through into the intestine, your liver converts into glucose. Just like maltitol and sorbitol, it has laxative effect in larger amounts so proceed with caution.

Beware of giving anything containing xylitol to your dog – it is highly toxic for dogs and can cause seizures and liver failure!

Also known as acesulfame potassium or E950, it’s an artificial sweetener about 200 times sweeter than sugar but your body doesn’t break it down so it’s calorie-free. Health authorities declared it safe but critics say it may affect your insulin production, increase the risk of cancer and affect prenatal development in babies – more research seems to be needed. If you only consume small amounts, for example in chewing gum or an occasional soft drink, that should be perfectly safe but avoid relying on it daily.

Aspartame is possibly the most controversial artificial sweetener. It causes cancer in animals but, as far as research goes, not in people. There was one human study that found possible links between aspartame and an increased risk of certain cancers but the findings weren’t strong enough to draw conclusions. Some people report health issues such as headaches, dizziness and other mood and cognition related effects following aspartame consumption.

When you digest aspartame, it’s broken down into phenylalanine, aspartic acid and methanol – all of which your body can deal with. However, people who suffer with phenylketonuria (PKU) cannot break down phenylalanine so they should avoid aspartame.

Sucralose is derived from sucrose (sugar) but it’s calorie-free and up to 650 times sweeter! Unlike many other artificial sweeteners, it doesn’t have a bitter aftertaste which makes it very popular for the use in fizzy drinks, chewing gum, baking mixes, breakfast cereals and salad dressings.

Your body absorbs only some of the sucralose consumed, which enters the bloodstream and is then excreted in urine. Scientific reviews concluded that sucralose is safe for humans but some people warn that it could be a migraine trigger.

Sorbitol is a low-calorie sweetener derived from glucose. It’s not as sweet as sugar and has about 30 per cent fewer calories. When eaten, it has a mouth-cooling sensation so it’s often used in toothpaste. It also helps food retain moisture and this quality makes it a popular ingredient in the production of baked goods that have a longer shelf-life.

If eaten in small quantities, it’s safe but large intakes can cause bloating and diarrhoea.

It’s a sugar alcohol which has zero calories and is not used by your body – it is simply excreted in urine. Again, too much may cause bloating and have a laxative effect.

It’s a sweet maze so what are the best choices? Stevia is a healthy option but to avoid its aftertaste, it’ best to mix it with date or chicory syrup and these two syrups are also great for drinks or drizzling over porridge or pancakes. Molasses is a good sweetener for biscuits, while xylitol can sweeten small treats and desserts. Hot drinks are the trickiest to sweeten the healthy way but small amounts of cane sugar won’t ruin your health.