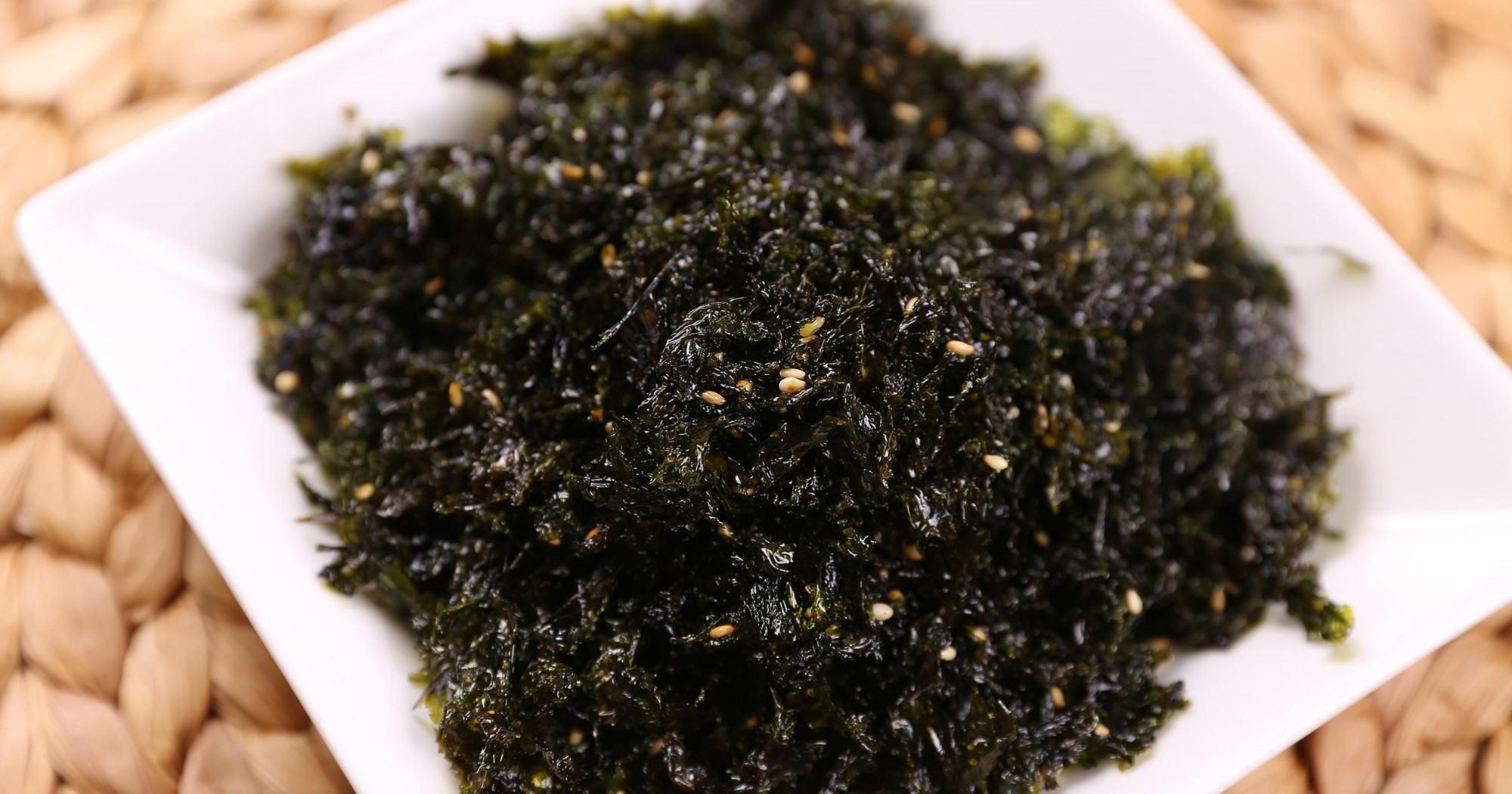 Most of us don’t know much about seaweed, apart from popping the little bubbles in stuff we find on the seashore (spiral wrack). And although you can eat that, we’re most likely to come across edible seaweed when it’s wrapped around sushi, floating in miso soup or ground up in superfood supplements. Some seaweed is also cultivated purely for the extraction of alginate, agar and carrageenan –  gelatinous substances used in food production for their gelling or thickening properties.

That one simple word – seaweed – covers a multitude of algae, from the tiniest ones to those spanning several metres and varying in colour from green to brown to red. Not all seaweed is edible – the majority of edible types come from the sea (marine algae) while most freshwater algae are toxic. Unless you’re an expert, it’s best to buy only seaweed that’s clearly labelled so you can be sure what you’re eating. With one exception – ‘crispy seaweed’ served in Chinese restaurants is not usually seaweed at all but dried, fried and seasoned cabbage!

Edible seaweed is an excellent source of iodine – an essential mineral – which it absorbs from seawater. It’s the only reliable source of iodine in a vegan diet so it’s a good idea to make it a staple. But don’t worry, you don’t need to eat it every day – just a couple of times a week is enough to keep your iodine reserves topped up. All edible seaweed, apart from the freshwater species, spirulina and chlorella, when eaten as a part of a meal such as sushi, soup or seaweed sprinkles, provides a good dose of iodine. But beware of kelp!

Kelp is exceptionally rich in iodine, with just one tablespoon containing about 2,000 micrograms of iodine, the highest amount of iodine in any food. So use kelp only sparingly. You need about 140 micrograms of iodine daily and an excess can disrupt thyroid function leading to weight gain, hypothyroidism or hyperthyroidism. Intakes of up to 500 micrograms a day are unlikely to cause any harm but don’t go any higher.

Many types of seaweed are rich in essential, polyunsaturated fats – omega-3s and omega-6. However, to get significant amounts from seaweed alone is not feasible so if you’re looking to boost your omega-3 intake, you might want to look for algae-based supplements. These contain algal DHA – the type of omega-3 fat our bodies need and can directly use.

Laver grows in coastal waters in delicate green sheets. There are several different species and most are called laver but those growing around Japan have become known as nori. Nutritionally, they are very similar and are high in protein, iron and iodine and can also nicely bump up your vitamin A and vitamin C intake. Don’t rely on them for vitamin B12 though as they’re not a reliable source.

Laver/nori can be dried, roasted and used as sheets for sushi wrapping, seasoned and turned into snacks or flaked and used as a condiment. In Wales, laver is traditionally used for making laverbread.

Dulse is a dark red or almost purple algae that grows on the northern coasts of the Atlantic and Pacific Oceans in large clumps. It can be eaten fresh, dried, fried, baked, dry-roasted and crumbled to make a savoury topping or used as a flavour enhancer in cooked dishes. In Ireland, it’s also known as dillisk and is traditionally dried and sold as a snack food.

Dulse is high in protein, potassium, iron and an excellent source of iodine. One strain of Pacific dulse is supposed to taste like bacon when fried!

Kelp is a name for a variety of large, closely related seaweed species growing in shallow waters. They cover vast areas of the seabed, forming ‘kelp forests’. You’re most likely to come across them at low tide when the long green or brown strips of seaweed are exposed in wide swathes. They have distinctive bubble-like structures near the main stem (stipe), which are in fact gas bladders that act like floats and keep the kelp upright when submerged.

Kombu is one of the main kelp species. It is used to flavour savoury dishes such as soups and stews, as a garnish, snack or in salads. Kombu is also invaluable when you cook dried beans from scratch as it helps to soften them and reduces flatulence by breaking down some of the beans’ indigestible sugars. Just add a strip of kombu to the cooking water and it’ll do the trick. There’s no need to eat it too, just using it in the cooking process is enough! Aside from that, it’s best to use kombu only as a condiment or garnish due to its extremely high iodine content.

Arame is a type of kelp that grows mainly in the northern Pacific Ocean and is typically used in many Asian dishes. It usually comes in the form of dried brown strips that can be quickly rehydrated and, due to its mild flavour, used in a wide variety of dishes. Arame is a great source of calcium, iron, iodine, magnesium and vitamin A but because it can be too high in iodine and sodium, it’s best used as a garnish or in small amounts in salads and other dishes.

Wakame is the seaweed typically used in miso soup. It has a mild taste and delicate texture and for that reason is used in many types of soups and salads. One wakame salad in particular, goma wakame, has become very popular in European sushi restaurants. Wakame is no different to other kelp species, in that it can be excessively rich in iodine – so don’t overdo it!

Spirulina is not seaweed but freshwater algae and is widely used as a dietary supplement, either as powder, flakes or in tablets. Dried spirulina is about 60 per cent protein and also a good source of several B vitamins, iron, manganese and magnesium.

Despite many claims about B12, spirulina doesn’t contain any and is simply not a reliable source. What it actually contains is something called B12 analogue/pseudovitamin, which is a molecule with a similar structure to B12 – but not function – and can compete with the real vitamin to bind to B12 receptors and thus reduce absorption of B12. The science is not entirely clear yet but eating or drinking spirulina throughout the day may block the absorption of a significant amount of B12.

Chlorella is a microscopic, freshwater, green algae and is only ever available in the form of green powder used as a food supplement. It is high in protein, vitamin A, some B vitamins, iron and zinc and can be cultivated for omega-3 fat production for supplements. It may be a healthful addition to your diet but you can get similar health benefits from eating kale and beans – a considerably cheaper option!

How much is too much?

Seaweed is an amazing nutritional powerhouse but sadly, as most seas are now heavily polluted, it can be contaminated with heavy metals and other toxins. The advice is to look for organic whenever possible and consume it regularly but sparingly. This way, you’ll get a good dose of iodine and a bunch of other nutrients but you’re not at risk of getting too much iodine or significant amounts of nasty pollutants.