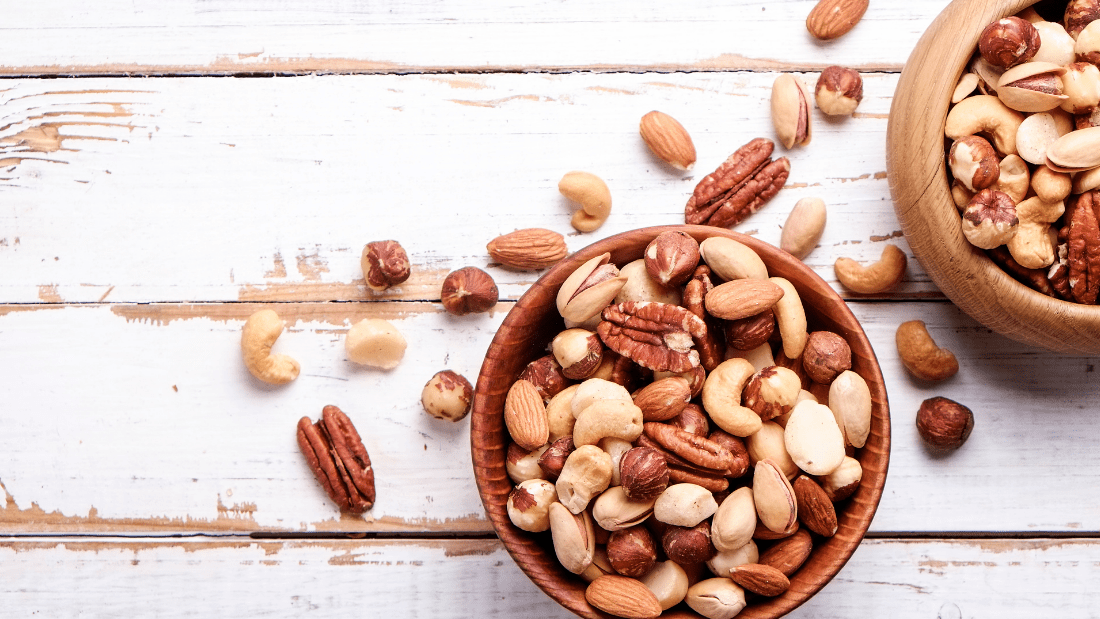 Some people avoid nuts due to their high fat content – but are all fats equal? Eating even small amounts regularly is associated with some pretty big health benefits, including lower blood cholesterol levels and reduced risk of cardiovascular disease and metabolic syndrome (precursor to diabetes).

Nuts have been linked to heart health for a long time, largely thanks to their cholesterol and triglyceride-lowering potential, which helps to prevent the build-up of fatty plaques on the inside of blood vessels. These plaques can result from a diet high in saturated fat and reduce the flexibility and flow through blood vessels. The result is an increase in blood pressure and possible heart attacks, strokes and vascular dementia if not treated. Just think of it like a hose becoming blocked – the pressure builds up as water struggles to pass through the blockage.

Many studies find that the cholesterol-lowering effect of nuts is greater than expected, based on the amount and type of fats they contain. This suggests that there are other beneficial compounds in nuts also contributing to these effects.

This one might surprise you – we’ve been taught that as nuts are high in fat, eating them too often can result in weight gain. However, the vast majority of research actually suggests that eating moderate portions of nuts regularly can help us to lose extra weight! Whilst it’s true that nuts are around 50-75 per cent fat, this is mostly the healthy mono- and poly-unsaturated fats. One study showed that those who ate two portions of nuts a week were 31 per cent less likely to gain excess weight than those who ate none.

Women who eat nuts five times or more per week have been shown to have a 45 per cent reduced risk of developing type 2 diabetes. Eating peanut butter more than four times a week was also associated with a 21 per cent reduced risk. Some large studies indicate that these effects are greater in women than in men.

Studies have linked frequent intake of nuts to a reduced risk of various cancers, including colorectal, pancreatic and breast cancer. Many of the compounds in nuts have been shown to prevent the initiation of cancer, as well as the growth and metastasis (spreading) of cancerous cells that already exist – and to help stop the blood supply to tumours. One study found that participants who ate more than three servings of nuts a week had a 40 per cent reduced risk of death from cancer. Pistachios and walnuts in particular have been highlighted as having strong anti-cancer properties.

Nuts are one of the best natural sources of melatonin – a hormone that regulates sleep – especially pistachios and walnuts.

Walnuts are also higher in the omega-3 fatty acid ALA than any other nut, which is converted by the body into a different omega-3 fatty acid, known as DHA. DHA is thought to help regulate serotonin and dopamine, which influence mood and sleep. Some studies have found links between introducing nuts into the diet and improvements in mood, but more research is needed.

Antioxidants are compounds that prevent the formation of free radicals, which can harm cells. Free radicals are molecules that have an unpaired electron. Electrons like to be in pairs, so free radicals scavenge the body looking for other electrons to capture, which can cause damage to DNA, proteins and cells. It’s known as oxidative damage and is associated with many diseases, such as cancer, Alzheimer’s and Parkinson’s disease, cardiovascular disease and arthritis.

Nuts are packed with antioxidant compounds with as much as 50 per cent of the antioxidants found in the skin. Try to find peanuts and almonds that still have the skin on them – and don’t peel the skin off pistachios!

The antioxidant activity decreases significantly after roasting in walnuts, cashews and hazelnuts, but increases in peanuts and almonds. Walnuts have the highest antioxidant potential of any nut and considerably higher than many fruits and vegetables. So if you could choose only one, walnuts are it!

Nuts are among the most nutrient-dense foods you can find and different types have different benefits.  To get a good range of vitamins and minerals, mixed nuts are the answer. You could try making your own.

Brazil nuts are an excellent source of this important mineral. Consuming just two Brazil nuts a day for 12 weeks can increase the amount of selenium in the blood by over 60 per cent. So, including Brazil nuts in the diet could avoid the need for supplements.

How to use them

Try replacing your usual snack with a handful of nuts – unsalted and raw is best, except for peanuts and almonds which are better roasted. Chop and add to salads, milk-alternative yoghurts, smoothies, cereal, stir-fry or simply spread nut butter on your toast in the morning. It’s best to use one that has no added sugar and is as close to 100 per cent nuts as possible!

Nuts are brimming with goodness, full of healthy fats, fibre, antioxidants and essential vitamins and minerals. Whilst they can be one of the pricier products on your shopping list, the benefits they offer are more than worth it. To reap their full health benefits, have a small portion every day or at least five days a week – and variety is key!