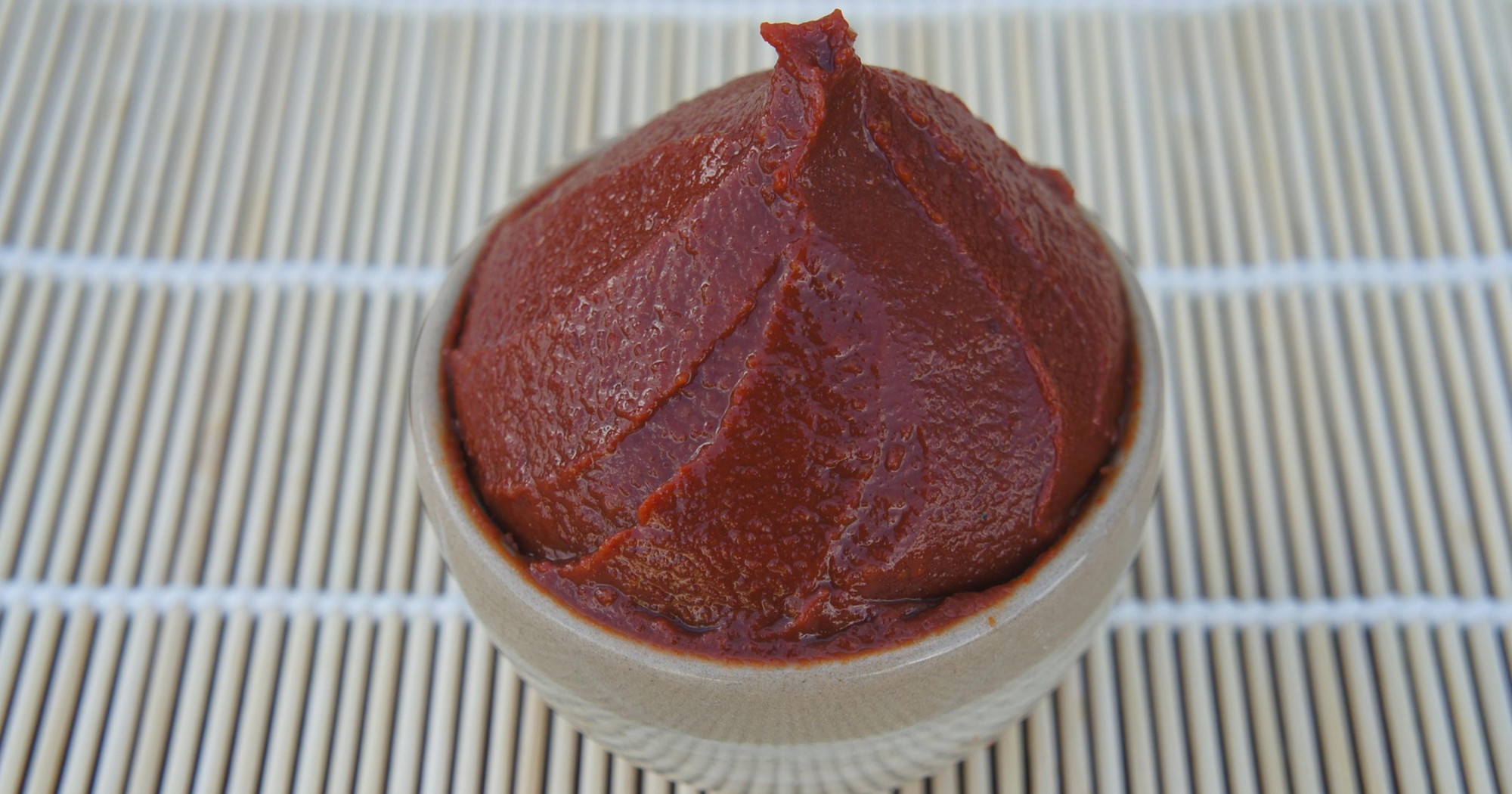 You’ve most likely come across miso in miso soup but this humble paste has a lot more to offer! Miso is a paste made from fermented soya beans and originally comes from Japan. This traditional seasoning is produced by fermenting soya beans with salt and koji (rice fermented with the fungus Aspergillus oryzae) over a long period of time. The length of fermentation produces different types of miso and there can be other ingredients, such as rice, barley, millet, wheat or buckwheat which is why there are hundreds of different miso pastes.

The process in detail

To make koji, Aspergillus oryzae is mixed with steamed rice in order to ferment the rice. The fungus produces enzymes that break down the rice’s starches into sugars and proteins into amino acids. When the rice has been sufficiently fermented by the fungus, the resulting mixture, koji, is combined with cooked crushed soya beans and salt. A second fermentation begins then, with the koji enzymes breaking down the soya proteins, starches and fats into readily digestible amino acids, sugars and fatty acids. The simple sugars in this mixture make certain beneficial bacteria thrive and aid the fermentation process – these bacteria produce lactic acid that helps to transform simple sugars into organic acids which, in turn, add to the characteristic miso flavour.

Miso paste is popular due to its very specific flavour – it adds the fifth taste, known as ‘umami’- to a wide variety of dishes including soups, spreads, salad dressings, vegetable dishes, sauces and marinades.

Umami is now recognised as a taste on its own, alongside sweetness, sourness, saltiness and bitterness. We have specific taste receptors for umami that is described as a pleasant savoury and ever so slightly tangy taste. Achieving this flavour with miso is much healthier than alternatives, such as adding taste enhancer monosodium glutamate (MSG) to our food.

Miso is rich in essential nutrients, such as protein, iron, magnesium, manganese, zinc, several B vitamins and vitamin K. It also provides health-beneficial bacteria that help improve our gut health. The only downside is that it contains a lot of salt but unless you use it excessively, this shouldn’t be a problem.

Thanks to the bacteria that manufacture it, miso contains small amounts of vitamin B12, which is an added bonus, but it doesn’t contain enough to be your only source of this vitamin.

As a fermented product, miso is easily digested because the bacteria in it have already done some of the hard work of breaking down the big molecules into smaller ones so your digestive system doesn’t have to work hard at it.

The most common type of miso is made from only soya and rice but there are countless different varieties made with other ingredients. Recently, new types of miso have appeared made from chickpeas or lentils. The length of fermentation time also affects the flavour, which can range from mild to very strong. Here are the most common varieties:

Shiro means white in Japanese and this reflects the light colour of this type of miso – it’s not strictly white but light yellow. Made from soya beans and rice and fermented for up to two months, white miso is mild and sweet or just slightly salty in taste. It’s the most versatile kind of miso.

Use for: salad dressings, soups, marinades or sautéed vegetables

Fermented for longer than white miso, yellow miso has a stronger flavour but isn’t too strong. You can often find a yellow miso variety made with soya and barley.

Use for: salad and noodle dressings, soups, marinades or glazes

Red miso is fermented for much longer than the lighter varieties – up to three years. That’s why it’s much stronger, saltier and has a deeper flavour. You won’t need much of it to add flavour to your dishes so use sparingly.

Use for: stews, sauces, marinades or glazes

Made from barley and soya beans, mugi miso is fermented for about 18 months and has a strong barley aroma but the flavour is quite mild.

Use for: sauces, stews, soups

Made from soya beans and brown rice, genmai miso is a medium-strength type of miso, slightly sweet and very versatile. This type of miso has been increasing in popularity over the last few years.

Use for: soups, stews, noodle dishes or stir-fries

What to look for and how to store it

It’s best to choose organic miso as that way you’ll avoid miso made with GM soya. If possible, it’s also important to look for the unpasteurised variety in order to get the full miso benefits – live bacteria and enzymes. You’ll need to store unpasteurised miso in the fridge but it keeps a long time after opening. Over time, it may change colour a little and that’s normal but keep an eye on any major changes in smell or taste.

How to use miso?

Miso adds a richness and depth of flavour to many savoury dishes from salads, stir-fries and sauces to glazes for roasted vegetables and some people even use it on toast. Some more adventurous folks have been experimenting with miso in sweet cuisine too but it’s not for the faint of heart!

When you cook with miso, only add it at the end of the cooking process as heating it for a long time can result in some loss of flavour – unless you use it as a glaze or marinade for baked or roasted foods, in which case the heat makes some water evaporate and concentrates the flavour. Yum!