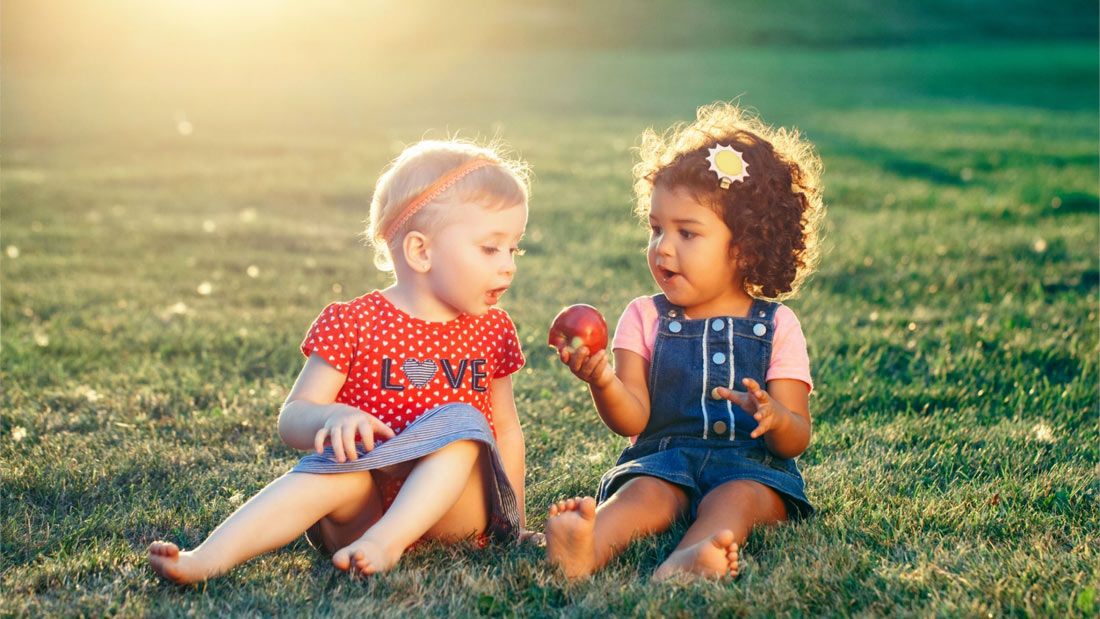 Vegan or not, all children need the same nutrients! A well-planned vegan diet can provide all they need and an extra bonus on top – a healthy start to life and a reduced risk of several diseases.

All children, vegan or not, need to be well-nourished to grow and develop properly. Yet, we don’t really learn about nutrition at school and our families often give us misguided ideas about what we ‘need’ to be healthy, so many of us simply don’t know what to eat to get all we need.

As vegans, we tend to learn more about nutrition along the way because our choices are always questioned. You’d probably be able to rattle out the answer to “Where do you get your protein?” in the middle of the night! When it comes to raising children, we top up our knowledge (or we should!) even more to make sure we’re doing everything right.
With a bit of meal-planning, a vegan diet can offer the best start to a healthy life, providing all the essential and many extra health-protective nutrients.

“It is the position of the Academy of Nutrition and Dietetics that appropriately planned vegetarian, including vegan, diets are healthful, nutritionally adequate, and may provide health benefits for the prevention and treatment of certain diseases. These diets are appropriate for all stages of the life cycle, including pregnancy, lactation, infancy, childhood, adolescence, older adulthood, and for athletes.” (Melina et al., 2016)

Many experts and health organisations agree that vegan diets are suitable for everyone, including children and pregnant and breastfeeding women – for example British Nutrition Foundation, British Dietetic Association, Italian Society of Human Nutrition, American Academy of Nutrition and Dietetics and Canadian Paediatric Society (Amit, 2010; Agnoli et al., 2017; BDA, 2017; BNF, 2018; Melina et al., 2016). All of them highlight that parents need to include good sources of all the main nutrients and use vitamin B12 and D supplements but that in general, a vegan diet gets their stamp of approval.

Veganism in pregnancy and breastfeeding

“Well-planned vegan and lacto-ovo-vegetarian diets can both meet the nutritional needs of pregnancy” (Amit, 2010).

“Pregnant and breastfeeding vegan women can meet all of their nutrient needs on a vegan diet that includes a variety of plant foods and reliable sources of vitamin B12 and vitamin D” (Baroni et al., 2018).

A baby is totally dependent on their mother’s diet during pregnancy. Choosing a vegan diet means providing your child with all the important nutrients while protecting them right from the start from some dangerous chemicals found in animal products (Baroni et al., 2018).

Vegan mothers are advised to pay special attention to their iron, iodine and zinc intake, omega-3 fats and vitamins B12 and D to ensure they get enough (Amit, 2010; Melina et al., 2016; Baroni et al., 2018). When all these nutrients are in plentiful supply (described in the A-Z of Nutrients), a vegan diet is not only suitable for pregnant women, it may also protect the mother against the development of preeclampsia (a pregnancy condition characterised by high blood pressure and possible organ damage), gestational diabetes and obesity, and it may protect the baby from some diseases that can develop early in life, such as paediatric wheezing, type 1 diabetes, neural tube defects, orofacial clefts, and some types of cancer (Baroni et al., 2018; Sebastiani et al., 2019).

On top of the general recommendations on what we need each day to be healthy, pregnant women should slightly increase their protein and somewhat limit fibre intake in late stages of pregnancy. It’s because fibre-rich foods can fill you up sooner and there’s limited room in the stomach when the baby’s getting bigger (Baroni et al., 2018).

Limiting fibre means opting for non-wholegrain versions of some foods, such as bread, pasta and rice. And increasing protein intake can be done by eating more lentils, beans, chickpeas (including hummus), soya (including tofu), nut butters and seeds – the recommended protein increase is about 10 per cent so for an average woman, that might mean eating just five extra grams.

Even though breastfeeding is best for the baby, it’s not always possible and parents have to find a suitable alternative – an infant formula. Soya-based formulas have been used for over 100 years and, over time, have been fine-tuned to fulfil the baby’s needs.

Unfortunately, in the UK there are no vegan soya formulas. This is because the vitamin D used is sourced from lanolin in sheep wool. However, soya infant formula contains no dairy and so contains much fewer animal products than dairy formula. One of the soya formulas available in the UK is for example SMA Wysoy, others usually have to be order from abroad.

A word of caution – home-made plant beverages are neither a suitable nor safe feeding option, babies up to 12 months of age require specific infant formulas (if breastmilk isn’t available) that contain the full spectrum of nutrients in the right amounts. Between 12 and 24 months of age, formula can be continued or another fortified plant-based milk may be used but it should be made specifically for toddlers. 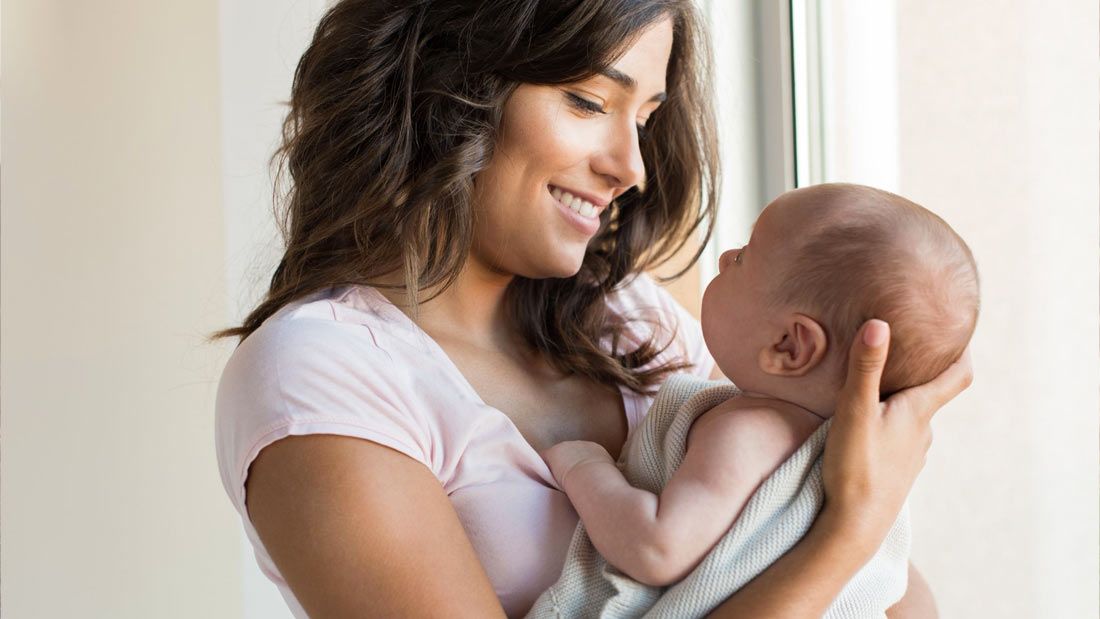 “Well-planned vegetarian and vegan diets with appropriate attention to specific nutrient components can provide a healthy alternative lifestyle at all stages of foetal, infant, child and adolescent growth” (Amit, 2010).

Children have higher protein needs, which is why they should have good protein sources at every meal but if they eat enough in general, they should be getting enough protein (Melina et al., 2016; Mariotti and Gardner, 2019).

They also need slightly more iron and zinc and it just so happens that some vegan staples, such as hummus, tofu, lentils, beans, chickpeas, nuts and seeds (and butters made from them) are great sources of all three – protein, iron and zinc.

Babies and toddlers shouldn’t each too many fibre-rich foods as these can fill them up quickly and reduce food intake. That doesn’t mean they shouldn’t eat all the healthy foods, such as fruit and vegetables, pulses or nut butters – it means that they should be given some low-fibre foods as well, for example mashed potatoes, white bread, tofu, soya or coconut yoghurts and child-friendly cereal products (Baroni et al., 2018). And because small children have high energy needs, fat intake shouldn’t be limited – avoid giving them low-fat products.

When it comes to plant milks, babies need breastmilk or formula until one year of age, after which full fat, fortified soya milk or plant-based milks made specifically for toddlers can be introduced as a complementary drink (Melina et al., 2016).

Vitamin B12 and D supplements are a must for children of all ages, and iodine may be one to watch as well.

See How to make healthy vegan meals and snacks for kids for detailed guidance and Supplements and Nutrients for recommended intakes.

“Whereas once there were questions regarding the suitability of plant-based diets during the growing years, research has established that choosing this dietary pattern can be a very wise choice.”

Vesanto Melina
The lead author of the Academy of Nutrition and Dietetics’
current Position Paper on Vegetarian Diets, quoted below,
Registered Dietitian and university lecturer

“Well-planned vegan, lacto-vegetarian, and lacto-ovo-vegetarian diets are appropriate, and they satisfy the nutrient needs and promote normal growth at all stages of the life cycle, including pregnancy and lactation, infancy, childhood, adolescence, older adulthood, and for athletes…

Vegetarian children and teens are at lower risk than their non-vegetarian peers for overweight and obesity. Children and adolescents with BMI values in the normal range are more likely to also be within the normal range as adults, resulting in significant disease risk reduction. Other benefits of a vegetarian diet in childhood and adolescence include greater consumption of fruits and vegetables, fewer sweets and salty snacks, and lower intakes of total and saturated fat. Consuming balanced vegetarian diets early in life can establish healthful lifelong habits.” (Melina et al., 2016)

Vegan, just like non-vegan, teenagers need to eat enough but as long as they have a varied, healthy diet, they grow and develop at the same rate as other adolescents and may even have better nutrient intake than their peers (Melina et al., 2016; Agnoli et al., 2017; Lemale et al., 2019). Vegan teenagers are at lower risk of obesity, type 2 diabetes, heart disease and some cancers later in life (Melina et al., 2016).

In terms of nutrition, veganism in adolescence means a healthier intake of fat (less saturated and more unsaturated fats), more fruit and vegetables, less junk food, salt and fizzy drinks compared to the average teenager (Amit, 2010). Just like younger kids, vegan teens need to have a sufficient intake of vitamins B12 and D, calcium, iron and protein to be at their best (Amit, 2010; Del Ciampo and Del Ciampo, 2019).

Teenagers who weren’t raised vegan but decide to go vegan in their adolescence need support and guidance. It’s essential that they eat a balanced diet and add a couple of supplements but once they understand what they need, their diet can support their health in the best possible way and inspire others. They may need to bring their own lunch to school but with our guidance, it’s a walk in the park! 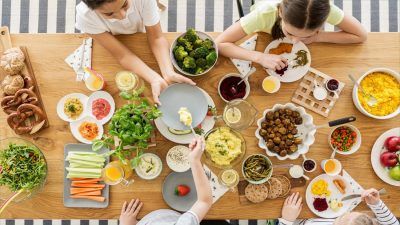 How to make healthy vegan meals and snacks for kids 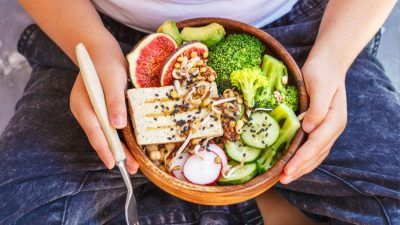 Which nutrients do children need and how much according to age? 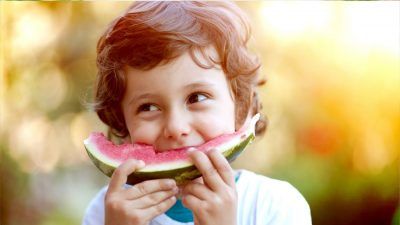 How to get children to eat healthily?