Lab meat – should vegans support it? 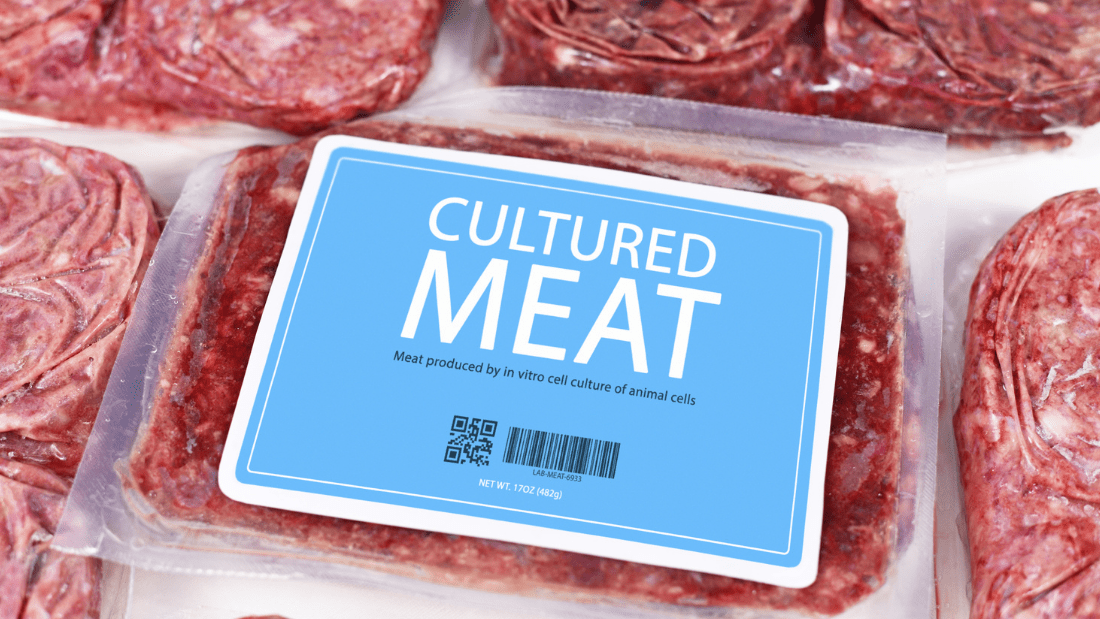 In late 2020, in the midst of the pandemic, a familiar plate of chicken and waffles, with a chicken bao on the side, was served up in a Singapore restaurant. But this was a chicken meal with a difference – no animal had died! It was the first-ever commercial sale of cultured ‘lab’ meat.

Globally, over 70 billion animals are killed for food every year. If you gauge animals by weight, 60 per cent of the mammals on Earth are livestock, 36 per cent are humans and only four per cent are wild. Cultured meat offers enormous potential to save animals’ lives and could herald the end of factory farming, mitigate climate change and slow the spread of antibiotic resistance. But it’s not for vegetarians and vegans, so should we support it and can it be ethical?

Lab meat first came to global attention in 2013, when scientist Mark Post and food technician Peter Verstrate unveiled the first cultured beef burger at a London press conference. Created by growing cow cells rather than slaughtering an animal, this burger took years of research and cost over £200,000 to produce. Their Maastricht-based company, Mosa Meat, are now working to develop affordable burgers. In 2018, I visited Mosa Meat’s lab with Viva!’s founder and director, Juliet Gellatley and saw cultured meat being produced.

It begins with a sample of muscle cells the size of a peppercorn that has been extracted from a cow under anaesthesia by a vet. The cells are grown in the lab where they develop muscle and fat. From this tiny sample weighing just 0.5 grams, Mosa Meat says they can produce 80,000 quarter pounders. That many burgers would require the lives of around 50 cows.

Clearly, lab meat isn’t vegan and its development has not been cruelty-free by any stretch. An early stumbling block was the foetal bovine serum (FBS) growth medium used for growing the cells which contains serum taken from the hearts of live calf foetuses and is as cruel as it sounds!

However, in 2019, Mosa Meat developed a medium containing no animal ingredients and in 2020, Didier Toubia, co-founder and CEO at cultured meat start-up, Aleph Farms in Israel, emailed me saying: “Our growth medium does not include any component obtained from animals.” Other companies have followed suit. Some (but not all) CEOs of these new companies are vegan and want to save animals and the environment.

A report from Oxford University’s Wildlife Conservation Research Unit says that cultured meat production could result in up to 96 per cent lower greenhouse gas emissions, 99 per cent lower land use and 96 per cent lower water use than conventional meat. The UK National Food Strategy argues that the Government “would be better off nudging consumers into changing their habits while investing in methane-reduction projects and the development of alternative proteins.”

The race is on

Dozens of companies around the world are developing cultured chicken, beef, pork and fish. Jeremy Coller, Chair of the FAIRR Initiative, says that in 2021, $506 million was invested in lab-grown meat. By 2035, cultured meat, along with plant foods and mycoprotein such as Quorn, will make up 11 per cent of protein sources compared to just two per cent in 2020.

Alongside this development in meat and fish, milk and dairy products are being produced by microorganisms rather than cows, using a technique called precision fermentation. Cow’s milk production is hugely inefficient and the dairy industry alone is responsible for four per cent of all greenhouse gas emissions, more than shipping and aviation combined.

“There is a real revolution going on here,” says biotech investor Jim Mellon, a leading backer of precision fermentation and author of Moo’s Law: An investor’s guide to the new agrarian revolution. There are huge opportunities, too, for companies developing non-leather materials for shoes, bags, furniture and other products.

The chicken produced in Singapore was by US start-up, Eat Just (previously Hampton Creek Foods) who sell vegan mayonnaise and plant-based egg. Chief executive, Josh Tetrick, hopes the technology will move us closer “to a world where the majority of meat we eat will not require tearing down a single forest, displacing a single animal’s habitat or using a single drop of antibiotics.” Three-quarters of all antibiotics sold globally are used in farmed animals and this is a major contributor to the rise in antibiotic-resistant superbugs.

The Covid-19 pandemic is thought to have originated in a market selling live animals for their meat and it exposed the vulnerability of intensive meat production as many processing plants were forced to shut due to the rapid spread of the virus among workers. This has encouraged investors to focus on healthier and more sustainable protein sources.

The United Nations Environment Programme says: “Pandemics such as the Covid-19 outbreak are a predictable and predicted outcome of how people source and grow food, trade and consume animals and alter environments.”

The end of factory farms?

Factory farms are also breeding grounds for disease and pose a real pandemic threat. They are places of sheer horror and misery and Viva!’s exposés of Hogwood and Flat House pig farms, Arla’s dairy farms and Faccenda chickens have shown how brutally cruel and pitiless factory farms are. Director Juliet Gellatley says:

“Looking through the eyes of a farmed animal, it would be better for all earthlings if cultured meat replaced animal slaughter. Having investigated and exposed the cruelty and terror in intensive farms and abattoirs, the sooner they are consigned to history the better.”

I would challenge a meat-eater feeling squeamish about lab meat to take a look inside a factory farm or a blood-spattered slaughterhouse and compare that to a food laboratory before they decide where they’d rather get their food.

The growth of vegan foods and cultured meat will inevitably work alongside one another towards the goal of ending factory farming and slaughter. It may not be for you, but if it saves animals, surely it can only be a good thing?