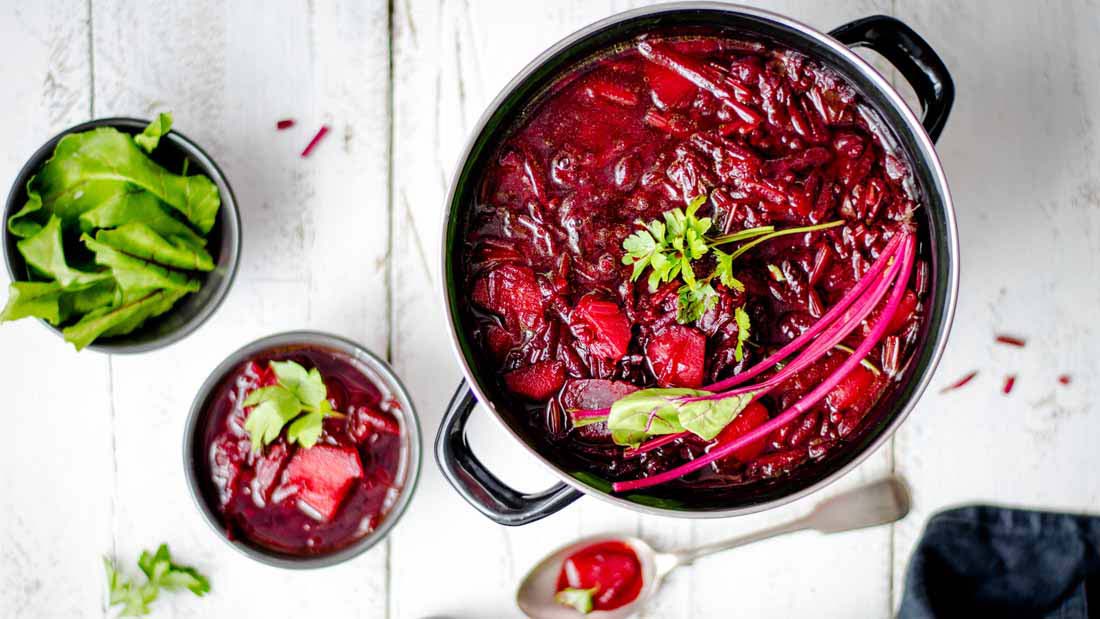 We rarely pay much attention to our gut health until we have to. Conversely, we tend to know how our mental state can affect our digestion and even have a ‘gut feeling’ about important things in our lives. Both eating and feeling well have a positive impact on our guts, whilst stress, sadness and an unhealthy diet can harm it.

Your gut is a world in itself, inhabited by trillions of bacteria, some of which are good, some neutral and some bad. What we eat determines which bacteria thrive and which don’t. You can make the good ones multiply and the bad ones starve – pretty magical!

All these bacteria are also known as the gut microbiome and altogether can weigh up to two kilograms! No two people have exactly the same gut bacteria as their composition is as individual as your fingerprint.

Depending on how much plant or animal products you eat, you gut bacteria will differ substantially. Meat-eaters tend to have the most harmful bacteria in their guts while meat reducers, pescaterians and vegetarians have a somewhat better balance. Vegans have the most beneficial bacteria.

It’s because animal foods encourage the growth of bacteria that feast on flesh and fat and produce toxic by-products. Plant-based foods, on the other hand, promote fibre-munching bacteria that help us to digest them. As a result, a wholesome plant-based diet leads to a healthier gut, which leads to lower levels of body inflammation and a stronger immune system. The harmful bacteria that feed on meat and fat have been linked to degenerative diseases such as rheumatoid arthritis, heart disease and even some types of cancer.

Some of the undesirable bacteria that are plentiful in meat-eaters’ guts use a compound found mostly in meat – carnitine – as an energy source, and produce trimethylamine-N-oxide (TMAO) as a waste product. TMAO is a very dangerous substance that stimulates the build-up of cholesterol plaques in your blood vessels, greatly increasing your risk of heart disease. Interestingly, vegans’ gut bacteria produce no TMAO, or only miniscule amounts, when exposed to carnitine.

What’s going on in our guts has a big effect on our immune system. A healthy gut means a strong gut wall and healthy immunity. A bad diet and lifestyle habits can lead to a weakened gut wall that allows bacteria, larger molecules and toxins into the bloodstream. This may negatively affect our immune system and also trigger autoimmune reactions, such as rheumatoid arthritis. It’s almost impossible to reverse an autoimmune reaction once it happens so the best strategy is to prevent it – and eating a plant-based diet rich in wholefoods is your best bet.

There are many types of irritable bowel diseases (IBDs) but the main ones are Crohn’s disease, IBS and ulcerative colitis. Every single sufferer has slightly different specifics when it comes to which foods they can or cannot eat but they all tend to have one thing in common. According to multiple studies, animal protein makes things worse. It is due to the higher amount of sulphur it contains compared to plant protein. IBD sufferers who avoid meat, fish and eggs (all sulphur-rich) will likely experience some relief. For people who are very sensitive, even some vegetables that contain sulphur, such as garlic, cabbage or beans, may cause issues, even though they contain much less than meat.

A plant-based diet is not the absolute answer to all IBDs but with Crohn’s disease, it can be fairly successful in achieving remission. Some people with IBDs do exceptionally well on a low FODMAP diet, which excludes certain types of fermentable carbohydrates. A plant-based version of low FODMAP is certainly worth trying if you suffer from any of these diseases.

It is a term used for foods that provide the best fodder for your good gut bacteria. They are what encourages the bacteria to multiply – and you benefit from the result. In general, all fibre-rich and starchy foods are prebiotics, and this covers most vegan staples – fruit and vegetables, pulses, wholegrains, and nuts and seeds. Our gut bacteria feast on them and produce short-chain fatty acids (SCFAs) in the process.

SCFAs can be used by our intestinal cells for energy but most importantly, they have anti-inflammatory and anti-cancer effects.  Butyrate is one of them and is particularly beneficial, having been shown to significantly reduce the risk of colon cancer. It may be one of the reasons why vegans have much lower rates of this disease compared to meat-eaters.

Probiotics are live bacteria that help to populate our guts and establish a better ratio of the good v bad bacteria. They are naturally found in fermented products such as yoghurt, tempeh, kimchi, miso or kombucha. These foods can legitimately be called probiotics and are extra good for us.

Probiotic supplements are also available and can be useful in specific situations, such as when you’ve taken a course of antibiotics, had severe diarrhoea or other diseases that affect your digestive system, including IBD. If you’re healthy and have a varied diet based around fibre-rich wholefoods, there’s no need to take these supplements.

What to do after antibiotics

Antibiotics can help us beat bacterial infections but they also kill a lot of good gut bacteria in the process. To make your gut a happy place for good bacteria again, it’s best to eat foods they like and to bring them some friends in fermented products.
Whilst you may be craving cup-a-soup and chocolate, these will not help your guts to recover so make sure to eat wholefoods – tomato and lentil soup with wholemeal bread is a good example, as is chickpea curry with brown rice, or porridge with fruit and nuts. Add some fermented foods and even a probiotic supplement and you’ll bounce back in no time.

There’s now a tonne of vegan junk food out there, which might be good for convenience and comfort eating but it’s bad for our guts. Processed foods, such as crisps, chips, biscuits, cakes, or coconut-oil-based vegan cheese, don’t feed the good bacteria and may throw your guts off-balance. It’s perfectly possible to be vegan and have ‘problematic’ gut bacteria so make sure you eat some wholegrains, pulses, fruit and vegetables daily.

The great thing about our guts is that you can change your gut bacteria simply by choosing what you eat. They won’t change overnight but the effect is noticeable within days or weeks at most, depending on how drastic your diet change is. One of the issues with radical diet changes, such as going vegan overnight, is that your gut bacteria need a bit of time to catch up. That’s why people may experience digestive adventures when they stop eating animals and start eating plants but over time, a new balance is established and your gut becomes happy and healthy.