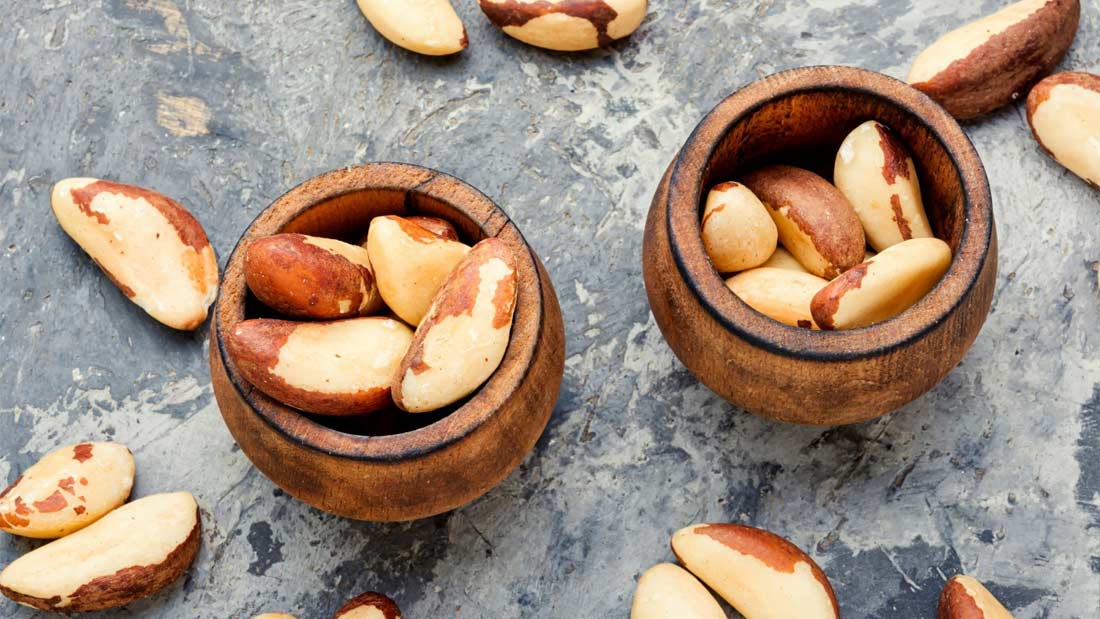 Selenium is a mineral that is absolutely crucial to our health but we need only microscopic amounts of it.

It is a vital component of many of the body’s enzymes and proteins called selenoproteins, which help to make DNA and protect against cell damage and infections. Selenoproteins are also needed for reproduction and thyroid hormones. The thyroid gland stores more selenium than the rest of the body, followed by muscles and reproductive organs. The Royal Society of Chemistry says that while our bodies contain only around 14 milligrams of selenium, every single cell in the body contains more than a million selenium atoms.

Fun fact: Selenium is used as a glass dye, in fireworks to produce red smoke and as an antifungal agent in dandruff shampoos.

In your thyroid gland, selenium and iodine work in a finely-tuned balance. Iodine is a component of thyroid hormone and selenium helps to convert it into its active form. That’s why both minerals are needed by the thyroid in adequate amounts. Too little or too much of one can throw your thyroid off balance.

Selenium is a powerful antioxidant which disables free radicals, those everyday waste products that have the potential to damage our cells. This process lowers the oxidative stress in our body and supports the immune system.
It’s been reported that people with higher selenium levels may be less likely to suffer from certain cancers. However, too much selenium can be toxic so there’s a fine line between the two. Having a healthy diet that provides sufficient selenium is the best bet – much safer than taking selenium supplements!

Selenium is absolutely essential for both female and male reproductive systems as it is involved in the normal development of the reproductive organs, sperm and eggs – and the foetus. Ovaries and testes actively take up and store selenium which is then incorporated into their enzymes.

Selenium is sometimes recommended as a supplement to support male fertility but it’s important not to take doses that are too high (over 100 micrograms). The same applies to women – adequate intake is important but too much would be counterproductive.

What if we don’t get enough?

Selenium deficiency can increase the risk of infection and disease and is linked to a number of neurodegenerative diseases, such as Alzheimer’s and Parkinson’s disease, mood changes and even cardiovascular disease and cancer. Deficiency can also lead to reproductive problems, including male and female infertility, miscarriage, preeclampsia, impaired foetal growth, premature labour, gestational diabetes and obstetric cholestasis (a liver disorder that can occur in pregnancy).

Don’t panic! Even if you’ve never heard of selenium before, it doesn’t mean you’re deficient. Simply make sure you include the below foods in your diet.

Where do we find it?

Selenium is naturally found in the soil but levels vary – hence the selenium content of plant foods varies accordingly.

Women need 60 micrograms a day (+ 10-20 when pregnant or breastfeeding) and men need 75 micrograms per day.

The best source of selenium by far is Brazil nuts. They take it up and store it and their selenium levels don’t vary as much as other foods. Just one or two Brazil nuts a day will comfortably cover your selenium needs. Other good sources include wholegrains (wholemeal bread, muesli, brown rice), sunflower seeds, sesame seeds, tofu, asparagus and mushrooms.

But the amount of selenium you eat is just part of the story – older age, alcohol and smoking are all associated with lower levels, suggesting that these factors may affect how well you absorb and store selenium. One study found that coffee, dairy products, eggs and white rice were all linked to lower levels while bread was linked to higher levels. It seems a wholegrain diet with a daily dose of nuts and seeds offers the most benefit.

Too much selenium can be toxic and lead to a condition called selenosis, with symptoms such as nausea, fatigue, garlic breath and the loss of hair, and skin and nail damage. In extreme cases, it can even lead to cirrhosis of the liver, pulmonary oedema and death.
The NHS says that taking 350 micrograms or less a day of selenium supplements is unlikely to cause any harm. Hair, skin and nail supplements commonly contain selenium in levels as high as 100 micrograms and should be safe but if you take multiple supplements, you can easily get too much. Always check the label!

One study found that 200 micrograms a day of selenium supplements increased the risk of aggressive prostate cancer among men with high selenium levels. The researchers were shocked and stopped the trial three years early. They suggest that men over 55 should avoid taking selenium (and vitamin E) supplements at doses that exceed the recommended dietary intake. Another study found that people taking 200 micrograms of selenium a day had a higher risk of non-melanoma skin cancer. These negative effects of supplements appear greatest in those who already have high selenium levels in their blood but if you don’t regularly take selenium, you shouldn’t be at risk.

The main issue with selenium is that there’s a fairly narrow range between a sufficient intake and toxicity. The recommended amount is 60-75 micrograms a day, while the upper safe limit is 450 micrograms – and that includes all sources, food and supplements combined.

A varied plant-based diet, including wholegrains, nuts and seeds, will likely provide sufficient amounts of selenium but to be on the safe side, include a couple of Brazil nuts a few times a week. At the same time, don’t eat a whole bag in one sitting and if you take any kind of supplements, check if they contain selenium and how much. It’s a balancing act with selenium but you’ll get the hang of it in no time!