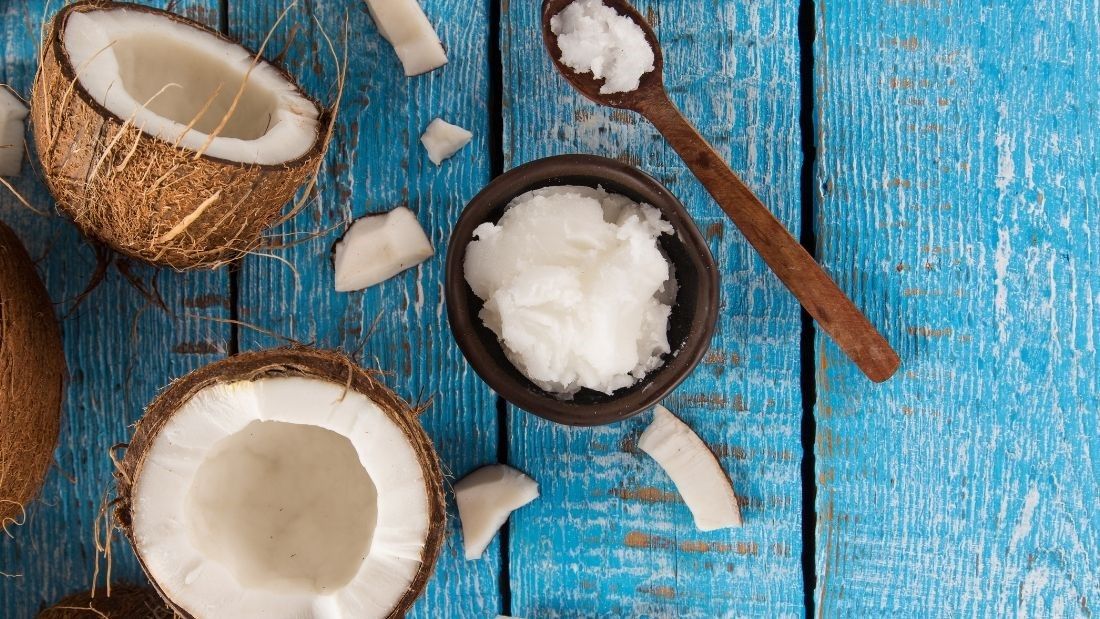 Like all plant foods, coconut is cholesterol-free. Although it is a fruit, coconut flesh has a very different nutritional content to other fruits. A third of the flesh is composed of fat and nearly 90 per cent of that is saturated – the worst type of fat as it increases cholesterol, which increases the risk of heart disease. Desiccated coconut (coconut flesh that has been flaked and dried) contains around two-thirds fat! A similar amount is found in hazelnuts, almonds and Brazil nuts but most of that is polyunsaturated fat that can lower the risk of heart disease if taken in moderation.

The fibre content in desiccated coconut is two to three times higher than in nuts. Some studies suggest that coconut flakes lower LDL ‘bad’ cholesterol because they are a good source of fibre which has cholesterol-lowering properties. Processing coconut to produce oil strips away this protective fibre. However, fibre is easily obtained from other fruit, vegetables, wholegrain foods and pulses that don’t contain so much fat. The recommended intake for fibre is 30 grams per day. To increase your intake, choose high-fibre breakfast cereals (oats or muesli with no added sugar), switch from white bread, pasta and rice to wholegrain bread, pasta and brown rice and ensure you have at least five portions of fruit and vegetables a day.

A 1980’s study used to promote coconut oil described how Pacific Islanders, who used coconut in every meal and so had a high intake of saturated fat, had lower than expected cholesterol and heart disease was rare. However, they had low intakes of salt, sugar and cholesterol and consumed a healthy amount of fibre, plant sterols and omega-3 fats. They also had an active lifestyle and used little tobacco. When the islanders moved to New Zealand and reduced their saturated fat intake, their intake of cholesterol, junk food (simple, instead of complex carbohydrates) and sugar increased and so did their risk of heart disease. This provides evidence that the whole diet and lifestyle can have a profound effect on health.

What’s the beef with saturated fat?

All major health organisations (World Health Organisation, the American Dietetic Association, the British Dietetic Association, the British Heart Foundation, the National Health Service, the US Food and Drug Administration and the European Food Safety Authority) agree that saturated fat is a risk factor for heart disease. Most saturated fat in the average UK diet comes from fatty meat, poultry skin, sausages and pies, whole milk and full fat dairy products (cheese, cream, butter and ghee), lard, coconut oil, palm oil, pastry, cakes, biscuits, sweets, and chocolate. Saturated fat drives up cholesterol levels and too much cholesterol can lead to fatty deposits (plaques) that not only clog the arteries and slow blood flow but can break apart and cause a heart attack or stroke. Cochrane Reviews are internationally recognised as the highest standard in evidence-based science. A 2012 Cochrane review found that reducing saturated (animal) fat, but not total fat, reduced the risk of heart attack and stroke by 14 per cent (1).

Are all saturated fats equal?

The saturated fats, lauric, myristic and palmitic acid are found in meat, dairy products, eggs, palm and coconut oil. They all raise cholesterol levels but not to the same extent:

One of the claims made for lauric acid from coconut oil is that is it broken down and used by the body differently from other saturated fats because it is made of medium-chain as opposed to long-chain fats. Most fats in animal products are long-chain saturated fats that are made into cholesterol or stored as body fat. Medium-chain fats are transported directly to the liver from where they supply energy directly to the heart, brain and muscles. Well, that’s the theory anyway.

Furthermore, medium-chain fats make up less than half of coconut fat, nearly a third is made up of the long-chain saturated myristic and palmitic acids (the major fats found in red meat) which raise ‘bad’ cholesterol levels. The rest consists of small amounts of monounsaturated and polyunsaturated fats.

Many of the health claims made for coconut oil are a mixture of anecdotal evidence, pseudoscience and poor reporting of a limited number of flawed studies (conducted over short periods of time with small numbers of participants). The results are not yet significant enough to prove long-term benefit. Enthusiasts appear to have extrapolated the potential benefits exaggerating them beyond anything the science can confirm. Whereas the research supporting the benefits of polyunsaturated plant oils (particularly monounsaturated and omega-3 fats), are well-established.

The claim that coconut oil may help treat or slow the progression of Alzheimer’s disease is largely based on anecdotal evidence and animal experiments which bear no relevance to humans. In a recent review in the British Journal of Nutrition it was concluded that: “It must be emphasised that the use of coconut oil to treat or prevent AD [Alzheimer’s disease] is not supported by any peer-reviewed large cohort clinical data; any positive findings are based on small clinical trials and on anecdotal evidence; however, coconut remains a compound of interest requiring further investigation” (2).

Another selling point for coconut oil is the reputed high smoke point (that’s when the fats in the oil break down or oxidise, creating harmful free radicals). However, many other oils have a higher smoke point. In fact, coconut oil has a relatively low smoke point compared to other commonly used cooking fats.

Like most ‘silver bullet’ food and health stories, there may be some truth in the claims made for coconut oil. Coconut oil is healthier than butter, lard and hydrogenated, trans-fat containing fats, but it is unlikely that including additional coconut oil in the diet would be beneficial. Medium-chain fats in coconut oil may raise HDL ‘good’ cholesterol. However, they can also raise LDL ‘bad’ and total cholesterol. Whereas replacing saturated fats with unsaturated fats (found in vegetable, olive, flaxseed and rapeseed oils, nuts and seeds) has been shown to increase HDL, lower LDL and improve overall cholesterol levels all at the same time.

Walter Willett MD, chair of the Department of Nutrition at the Harvard School for Public Health sums it up nicely:

“Most of the research so far has consisted of short-term studies to examine its effect on cholesterol levels. We don’t really know how coconut oil affects heart disease, and I don’t think coconut oil is as healthful as vegetable oils like olive oil and soybean oil, which are mainly unsaturated fat and therefore both lower LDL and increase HDL.” (3)

It is the total diet coupled to a healthy lifestyle that is most important in disease prevention. It is better to eat a diet with a variety than to concentrate on individual foods as the key to good health. Coconut oil’s HDL-boosting effect may make it ‘less bad’ than its high-saturated fat cousins (butter and lard), but it is not a good choice of oils to reduce the risk of heart disease. You are better off replacing saturated fats with healthier unsaturated vegetable oils such as olive oil and rapeseed oil for cooking and flaxseed oil for sauces and dressings.

According to the UN’s Food and Agriculture Organisation, global demand for coconuts is growing at 10 per cent a year. Most are grown by small-scale farmers across the Asia Pacific and despite the growing coconut trade, many live in poverty or very basic conditions as the price they’re paid for their harvest is dictated by processors. As a response, many initiatives have been launched to help coconut growing communities prosper and farm in a sustainable way. If you have a favourite brand of coconut products, check out their website as many have details of their projects. Always look for a Fair Trade label as that should ensure farmers get a proper wage.

Coconut harvesting is an extremely contentious issue. In Thailand and some other countries, pigtailed macaques are trained to do the harvesting because they are much more efficient than people and their labour is ‘free’. It’s been reported that as much as 99 per cent of Thai coconuts are harvested by these monkeys who are either taken from the wild or bred for the purpose and trained. Some say the monkeys are kept as family pets but investigation footage and photos suggest gruelling working hours, monkeys fainting of exhaustion, a life spent on a leash, rough handling, and absolutely no joy.

A Fair Trade certificate doesn’t mean a monkey didn’t pick your coconut, so make sure your coconut product manufacturer has a policy in place that ensures only humans harvest their coconuts.

Coconuts taste great but all the ethical issues and saturated fat make them a not-so-ideal food. Add to it that unless you live in Southeast Asia, coconut products will always have to travel a long way to reach you and need packaging and you end up in an ethical conundrum.

What should we do about it?

Do not rely on coconut products as your staple foods but have them as a treat only. If possible buy organic and Fair Trade to support sustainable coconut farming without chemical fertilisers and pesticides and with proper wages for the farm workers. Most importantly, research the company from which you’re buying coconut products to learn about their ethics.

Fernando et al., 2015. The role of dietary coconut for the prevention and treatment of Alzheimer’s disease: potential mechanisms of action. British Journal of Nutrition. 22 1-14.