Home » Health » Health articles » B12 – what vegans need to know

B12 – what vegans need to know 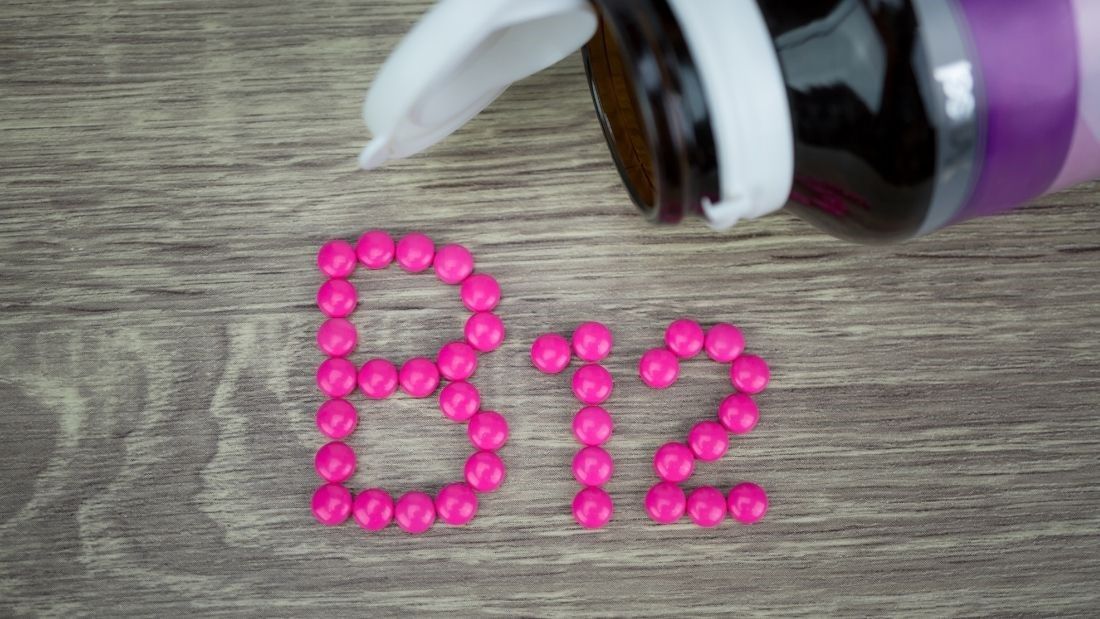 Everyone needs a regular source of vitamin B12 and for vegans this means a supplement.

B12 is often cited as a vitamin found naturally only in meat, dairy and other animal foods. The argument that ‘vegans have to take pills’ is used to claim that veganism is unnatural but, of course, it’s a bit more complicated than that.

B12 is naturally made by bacteria in soil and water but can be grown in industrial-sized vats for use as supplements. Traditionally, farmed animals would have got their B12 from water and eating food from the ground but with so many now confined in factory farms, animals themselves are given B12 supplements. So, contrary to what the meat industry adverts say, B12 is not ‘naturally’ present in meat and dairy. The notion that you need meat and dairy foods for B12 is a myth – cut out the middleman and take the supplements yourself!

Make no mistake, vitamin B12 is an important nutrient as it helps make our red blood cells and DNA and keeps our nervous system healthy. Low levels can lead to anaemia, where your red blood cells aren’t able to carry oxygen around your body properly. A lack of B12 can also lead to damage of the myelin sheath which wraps around our nerves so deficiency is frequently associated with neurological problems.

Symptoms of B12 deficiency can include extreme tiredness, lack of energy, pins and needles, muscle weakness, depression and problems with memory, understanding and judgement. More recently, losing your sense of smell has also been identified as a symptom. Deficiency can also lead to raised levels of a substance called homocysteine, which can increase the risk of heart disease and stroke. If you’re worried, B12 levels can easily be checked by your doctor and any deficiency can be treated with supplements or a course of injections.

Viva! Health recommends a daily B12 supplement that provides 50 micrograms or a weekly one of 2,000 micrograms. A microgram is a millionth of a gram so we need only a small amount – but getting that small amount is vital.

There are two main forms of B12 supplements:

While some people don’t consume enough vitamin B12 to meet their needs, others are not able to absorb enough no matter how much they take in. The reason is that B12 absorption is a complex process with multiple steps involved and which decline with age. An additional problem is that B12 in meat and dairy is bound to animal protein and must be released before it can be absorbed – making B12 in animal foods less absorbable. Vitamin B12 in fortified foods and dietary supplements is already in free form (is not bound to anything) and is, therefore, more easily absorbed.

Up to 40 per cent of older people in the UK suffer from low B12 regardless of their diet and in the US, people over 50 are advised to obtain most of their vitamin B12 from vitamin supplements or fortified foods. Vegans, it could be argued, have a head start if they routinely include B12 fortified foods and a supplement in their diet!

Absorption can also be inhibited by poorly functioning kidneys, cigarette smoke, nitrous oxide used for anaesthesia, heating food in a microwave or cooker and some medications, including Metformin (for diabetes), anticonvulsants and proton pump inhibitors (PPI’s). People who have difficulty absorbing vitamin B12, such as those with Crohn’s disease, may benefit from B12 injections which avoid the need for absorption in the digestive tract.

B12 deficiency may be caused by lack of a protein called intrinsic factor. It is produced by cells lining the stomach which must bind with B12 in order for it to be absorbed. Lack of intrinsic factor is most common in older people and is usually associated with an autoimmune disease known as pernicious anaemia. The most common treatment is lifelong B12 intramuscular injections although small amounts of B12 can be absorbed without intrinsic factor. One review found that taking a 1,000 microgram supplement daily was an effective alternative to injections.

Plant-based food sources include yeast extract and B12-fortified products such as nutritional yeast flakes, plant milks, vegan yoghurts and desserts, breakfast cereals and margarine (make sure they are fortified if you are relying on them as a source of B12). Fermented soya foods and seaweeds don’t provide a reliable source of B12 and you would be hard-pushed to get your 50 micrograms a day from fortified foods alone, so it’s best to take a supplement with fortified foods acting as a top up.

According to a 2019 Czech survey, vegans who regularly took a supplement had similar levels of B12 to non-vegans but those not supplementing had significantly lower levels. This is a predictable result but one that carries a simple and important message – remember to take your B12!

A well-planned, varied, vegan diet, including B12 fortified foods and supplements, not only meets your requirements but provides a healthier source than does meat or dairy, setting you up for a healthy old age.