Home » Health » Health articles » Are we designed to eat meat?

Are we designed to eat meat? 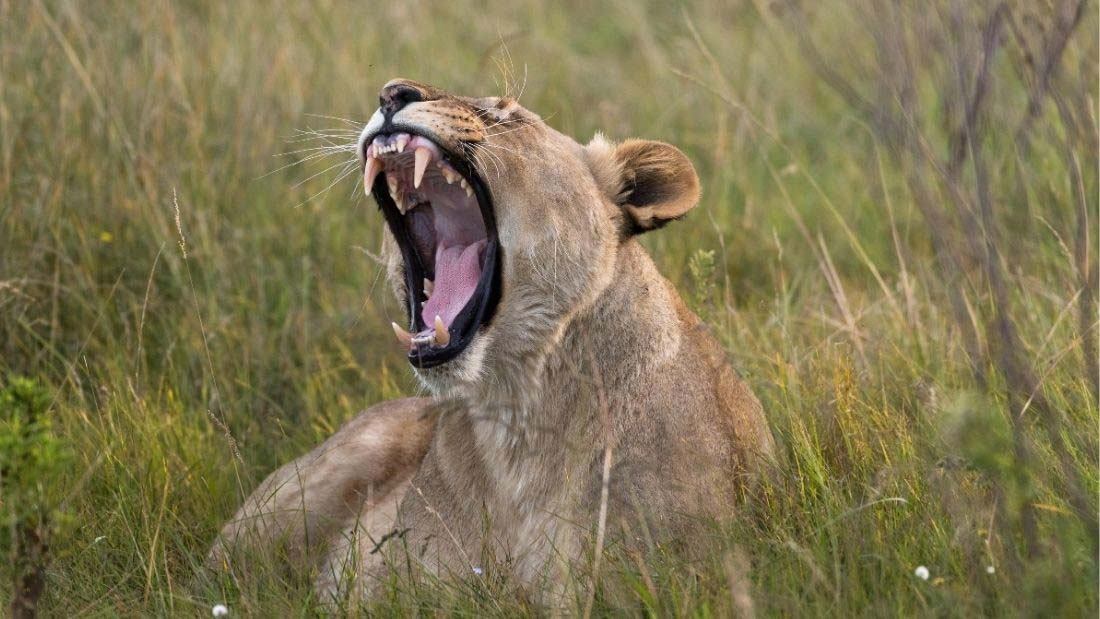 Do you think that our little canine teeth show that we are natural meat-eaters? If so, you are not alone, but you are wrong. Consider how carnivores eat, you might not (literally) have the stomach for it; could you snatch up a rabbit and tear into the flesh with your bare teeth like a lion does? Their canines reach up to seven centimetres in length and can rip just about anything apart, yours can’t!

Carnivores have sharp teeth and claws that help them to rip their prey apart, tearing off chunks of raw meat and ‘wolfing’ them down without the aid of a knife and fork! Their acidic stomachs help to digest flesh quickly and their short intestines allow the rapid expulsion of rotting meat remains. The diet of wolves, for example, consists mainly of meat from large prey such as elks, with nutrient-dense organs eaten first followed by muscle tissue. When carnivores eat saturated fat from meat it does them no harm, we on the other hand respond very differently – saturated fat clogs up our arteries increasing our risk of heart disease and stroke.

Herbivores, such as rabbits, horses and sheep, chew from side-to-side and have longer intestines to absorb nutrients. Their saliva (and ours) contains amylase, an enzyme that helps digest starchy carbohydrates found in bread, rice and other wholegrains. Carnivores don’t spend as much time chewing nor do they consume many carbohydrates, so there is no need for amylase in their saliva. Their strong jaws can only open and shut and are incapable of moving from side to side as ours do.

Human beings have characteristics of herbivores

We have short, soft fingernails not claws and our canine teeth are small and blunt and have no chance of penetrating a hide. When asked if humans are herbivores, carnivores or omnivores, Dr William C. Roberts, Editor-in-Chief, of The American Journal of Cardiology said: “Although most of us conduct our lives as omnivores in that we eat flesh as well as vegetables and fruits, human beings have characteristics of herbivores, not carnivores”.

The Palaeolithic, or hunter-gatherer, diet as a model for modern human nutrition was first proposed in the 1980s by US anthropologists Boyd Eaton and Melvin Konner. It assumed our ancestors ate mostly lean meat and fish, with some fruit and vegetables, but no dairy, grains or pulses – a diet high in protein and low in carbs. Paleo promoters reckon the mismatch between this diet and contemporary Western diets is responsible for the current high levels of obesity, diabetes and heart disease.

Writing about our ancient ancestors in Horizon, the EU Research and Innovation magazine, Dr Amanda Henry, Associate Professor at the Faculty of Archaeology at Leiden University in the Netherlands, said: “Plants were the staples. They were the foods that formed the basis of our calories in most environments”.

The trend continues throughout our history, with geochemical analysis of grains and pulses from Neolithic sites confirming that early farmers also relied much more heavily on plant protein than previously thought. So, only in recent times, it seems, did we switch to relying so heavily on animal protein.

The notion that we are designed to eat meat has many other flaws. The average life expectancy of our ancient ancestors was around 30 years, so even if they did live on a diet of meat and more meat (they didn’t), they simply wouldn’t have lived long enough to develop heart disease.

Paleo pundits assume that our biology has not changed from the Palaeolithic era that began over three million years ago but genetic evidence doesn’t agree and shows that our bodies have adapted over time to suit a plant-based diet – and that includes producing more amylase in our saliva. Domesticated dogs produce much more amylase than wolves from whom they evolved – not in their saliva but from their pancreases – allowing them, too, to thrive on starch-rich diets.

Another adaptation that points to a plant-based diet is our ability to build long-chain fatty acids, important for brain development and cognitive function. Neolithic farmers probably ate less of these than their predecessors and evidence shows how we developed enzymes to build these long-chain fats from the short ones found widely in nuts, seeds and their oils.

Despite the evidence that plant foods fuelled our evolution and that we are more suited to a plant-based diet, the meaty myths persist, including the notion that meat made us smart. The ‘expensive-tissue hypothesis’, proposed in the 1990’s by British scientists Leslie Aiello and Peter Wheeler, states that the high energy requirement of our relatively large brains is offset by a corresponding reduction in our gut size. The theory is that eating meat enabled us to reduce the size of our gut, freeing up energy for the brain. But it’s not as simple as that. Researchers say that the discovery of fire and cooking improved the quality of our diet by making food easier to digest. We also saved energy by walking upright, by growing more slowly and reproducing later and it was these factors that fuelled the growth in our brain size.

Far from tearing animals apart with our teeth, we aren’t even suited to eating raw meat or cooked meat, even at moderate levels, as it is linked to a wide range of health problems, including obesity, heart disease, diabetes and cancer – in fact, all the big killer diseases.

The typical Western diet, packed with meat, dairy and processed food, is linked to a wide range of illnesses and diseases but a Paleo diet is not the answer. All major health bodies recommend reducing meat consumption, not only for your own health but for the planet too, because animal agriculture is having a devastating effect on the environment. A varied vegan diet can meet all your nutritional needs and is the best diet for animals and the planet – and we are designed for it!