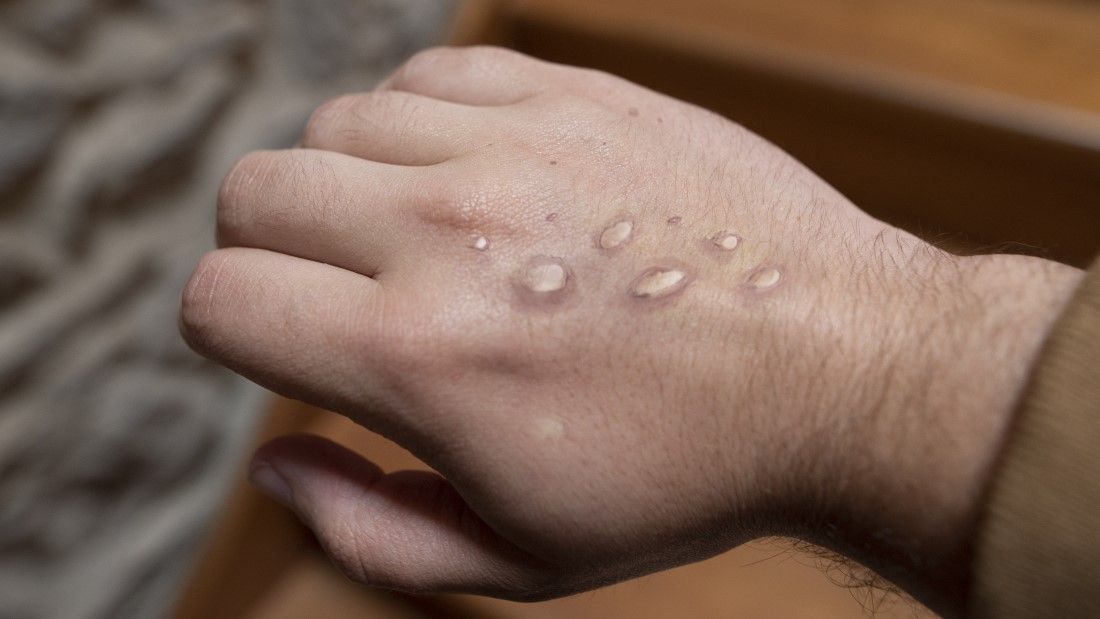 Monkeypox is a zoonotic infectious disease – transmitted to humans from animals. The symptoms are similar to those seen in people with smallpox, although less severe.

If you get infected with monkeypox, it usually takes between five and 21 days for the first symptoms to appear, these include:

A rash usually appears one to five days after the first symptoms. The rash starts as raised spots, which turn into small blisters filled with fluid. The number of these can vary from a few to several thousand. These blisters eventually form scabs which later fall off. The symptoms usually clear up in two to four weeks.

The World Health Organisation (WHO) says that the case fatality ratio of monkeypox has historically ranged from 0 to 11 per cent in the general population and has been higher among young children. In recent times, the case fatality ratio has been around three to six per cent. As of May 29, there have been no reported fatalities in the current outbreak.

The name ‘monkeypox’ comes from the fact that the disease was first seen in captive monkeys that had been shipped from Singapore to a research laboratory in Denmark in 1958. However, its natural hosts are squirrels and other rodents and it spreads in areas where they are hunted by people for meat. Infections have occurred in squirrels, rats, mice, monkeys, prairie dogs and humans.

In the wild, monkeypox virus infections occur with a high prevalence in several species of squirrels but rarely in forest-dwelling primates. Human infection occurs most frequently in small villages where people hunt and eat squirrels and other small mammals. People usually catch the disease from hunting and handling dead animals (bushmeat), animal bites or scratches, body fluids, contaminated objects or close contact with an infected person, as is the case for some travellers.

This virus is endemic to western and central Africa, outbreaks in other countries tend to be related to the exotic pet trade and international travel.

It’s another classic case of humans’ interference with wild animals shaking a virus lose from its natural host! We are decimating wild landscapes, killing wild animals or caging them and sending them to market, invading and disrupting ecosystems – covid was a warning shot that we seem to have learnt nothing from.

The Government’s focus on preparing better for the next pandemic, by developing vaccines or stockpiling PPE, is misguided and foolhardy. We should be focussing on preventing the next pandemic by banning the sale of wild animals globally and stopping large-scale factory farming. Going vegan would be the simplest, and most effective solution.

The first human case of monkeypox was recorded in 1970 in the Democratic Republic of the Congo in a nine-year-old boy living in a region where smallpox was eliminated in 1968. Since then, most cases have been reported in central and west Africa, often in areas close to tropical rainforests but increasingly in urban areas too.

Cases continue to be reported but the true burden of monkeypox is unknown. It’s estimated that more than 1,000 cases of monkeypox occur in people just in the Democratic Republic of the Congo alone each year. However, because most cases occur in rural Africa, underreporting may lead to an underestimation of the potential threat of this zoonotic disease.

A few thousand cases a year are thought to occur in Africa, typically in the western and central parts of the continent. Cases outside Africa have previously been limited to a handful that were associated with travel to Africa or with the importation of infected animals.

In 2003, the first monkeypox outbreak outside Africa was linked to the import prairie dogs, destined to be sold as household pets in the Midwestern US. They had been housed alongside infected Gambian giant rats imported from Ghana – this resulted in 53  human cases of monkeypox in the US.

Travel related monkeypox cases have been reported in the US, Singapore and Israel as well as the UK. Between 2018 and 2021, a number of cases of monkeypox were reported in the UK in people who had travelled from Nigeria. A healthcare worker, caring for one of these cases, was infected from contact with contaminated bed linen. Healthcare-associated transmission of monkeypox has been seen on multiple occasions in areas where the disease is endemic.

On July 23, 2022, Dr Tedros Adhanom Ghebreyesushe, WHO director-general, declared the escalating global monkeypox outbreak a Public Health Emergency of International Concern. There are only two other such health emergencies at present – the coronavirus pandemic and the continuing effort to eradicate polio. Dr Tedros said the declaration would help speed up the development of vaccines and the implementation of measures to limit the spread of the virus.

In May 2022, outbreaks were reported across 19 non-endemic countries, mainly in Europe (the UK, Spain, Portugal, Germany, Belgium, France, the Netherlands, Italy, Sweden) but also in the US, Canada, Australia and the United Arab Emirates (UAE). In the UK, the first case in this outbreak was detected on 7 May, by 26 May, there were 90 confirmed cases in the UK, rising to 106 by 27 May, 302 by 5 June, and as of the end of July, reaching 2,500 in the UK.

This is the first time the virus was found in people with no clear connection to central and west Africa. It is unclear what is causing this widespread outbreak.

The extensive vaccination programme against smallpox led to the world’s first eradication of disease by vaccination in 1980. Because the viruses that cause smallpox and monkeypox are closely related (both belong to the orthopoxvirus genus), the smallpox vaccine also kept monkeypox at bay.

However, because routine vaccination of infants was discontinued several decades ago, for example in 1971 in the UK, the number of people lacking protection in many countries has increased over time and cases have substantially increased in central Africa.

Although human-to-human transmission has previously been limited, decreasing immunity to orthopoxviruses (because of the rising number of people not vaccinated against smallpox) reflects an increasing threat of disease spread between humans.

Why is it happening?

One concern is that the virus has changed in a way that has allowed it to spread more easily, although there is little evidence to suggest this is a new variant. The monkeypox virus is a DNA virus and they don’t mutate as rapidly as RNA viruses, such as covid or flu viruses.

It’s also been suggested that the virus simply found itself in the right place at the right time to thrive. As said, monkeypox may spread more easily than it did in the past, when the smallpox vaccine was in use. A further suggestion is that there may have been a superspreading event, such as a festival, in which large numbers of people mixed and caught the disease then took it home to different countries. A number of cases in Europe have been traced to large gatherings and festivals.

“We’re in a very new situation, that is a surprise and a worry” Professor Sir Peter Horby, the director of the University of Oxford’s Pandemic Sciences Institute, told the BBC. While he said this is “not covid-two” he says “we need to act” to prevent the virus getting a foothold as this is “something we really want to avoid.” Dr Hugh Adler, who has treated patients with monkeypox, agrees: “It’s not a pattern we’ve seen before – this is a surprise.”

How serious is it?

Dr Hans Kluge, Europe Regional Director for the UN agency, said most of the cases are so far mild. “Monkeypox is usually a self-limiting illness, and most of those infected will recover within a few weeks without treatment” said Dr Kluge. “However, the disease can be more severe, especially in young children, pregnant women and individuals who are immunocompromised.”

“As we enter the summer season in the European Region, with mass gatherings, festivals and parties, I am concerned that transmission could accelerate, as the cases currently being detected are among those engaging in sexual activity, and the symptoms are unfamiliar to many” said Dr Kluge.

He added that handwashing, as well as other measures implemented during the covid pandemic, are also critical to reduce transmission in healthcare settings.

The Government have begun buying stocks of the smallpox vaccine which offers 85 per cent protection since the two viruses are similar. Following on from covid, another zoonosis that jumped from animals to humans, monkeypox shows that if we exploit animals and take them from their natural habitats, we put public health at risk.

Our relationship with animals can no longer be based on exploitation, using animals for food, clothing, entertainment and as commodities is increasingly becoming a global threat to health. It’s time to go vegan.

We are urging Boris Johnson to promote veganism as a way of stopping the spread of zoonotic diseases. Join our fight now by emailing him with the below template:

If you use a webmail provider, find below the email text:

To: boris.johnson.mp@parliament.uk
Subject: Promote veganism as a way of stopping the spread of zoonotic diseases
Body:

Following the outbreak of Monkeypox in the UK and other countries, I am incredibly concerned. I urge you to promote veganism as a way of stopping the spread of zoonotic diseases.

Covid-19 caused widespread illness and death, with devastating consequences for our country. As a zoonotic disease, Covid originated from the mistreatment of animals, and then spread across the globe. Monkeypox is also a zoonotic disease that presents a risk to health and lives.

We must stop the mistreatment of animals, by encouraging people to go vegan. The UK should lead by example and promote a vegan lifestyle as the best choice for animals, the planet, and our health.

Let’s stop the spread of zoonotic diseases by going vegan.