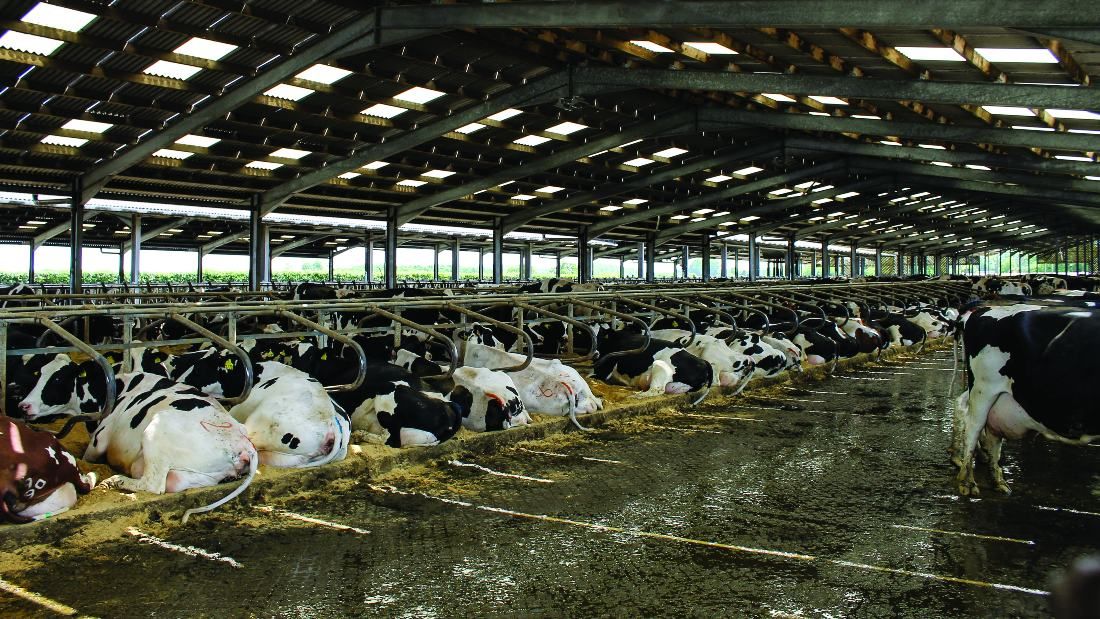 Today, livestock accounts for 60 per cent of all mammal biomass on the planet. Cattle are the most abundant, far surpassing the biomass of all wild mammals combined, which make up a paltry four per cent.1Bar-On YM, Phillips R and Milo R. 2018. The biomass distribution on Earth. Proceedings of the National Academy of Sciences USA. 115 (25) 6506-6511. There are 26 billion chickens in the world – more than three birds for every single person on the planet. Most farmed animals in the UK and many other countries are reared intensively in huge numbers: “In industrialised countries, the vast majority of chickens and turkeys are now produced in houses in which 15,000-70,000 birds are confined throughout their lifespan. Increasingly, pigs and cattle are also raised under similar conditions of confinement and high density.”2Leibler JH, Otte J, Roland-Holst D et al. 2009. Industrial food animal production and global health risks: exploring the ecosystems and economics of avian influenza. Ecohealth. 6 (1) 58-70. These large factory farms increase the risk of disease: “Intensification of livestock production, especially pigs and poultry, facilitates disease transmission by increasing population size and density.”3Jones BA, Grace D, Kock R et al. 2013. Zoonosis emergence linked to agricultural intensification and environmental change. Proceedings of the National Academy of Sciences USA.110 (21) 8399-8404.

These highly intensified systems are a far-cry from the bucolic image of cows grazing on hilly pastures. Most farmed animals are confined, many in their thousands, in giant metal sheds condemned to a life where they will never feel the grass under their feet or the sun on their face: “Thousands of animals of similar genotypes are raised for one purpose (such as pigs, layer hens, broiler chickens, ducks and turkeys) with rapid population turnover at one site under highly controlled conditions, often in confined housing, with nutrient dense and artificial feeds replacing access to forage crops.”2Leibler JH, Otte J, Roland-Holst D et al. 2009. Industrial food animal production and global health risks: exploring the ecosystems and economics of avian influenza. Ecohealth. 6 (1) 58-70.

Experts at the European Medicines Agency (EMA) and European Food Safety Authority (EFSA) say: “Knowledge on the relationship between stress and animal disease is accumulating.” They say that animals reared in high-stress environments such as factory farms are more susceptible to infectious diseases.4EMA and EFSA. 2017. EMA and EFSA Joint Scientific Opinion on measures to reduce the need to use antimicrobial agents in animal husbandry in the European Union, and the resulting impacts on food safety. EFSA Journal. 15 (1) 4666. They describe eight stressors that are present in modern livestock production units: heat, cold, crowding, mixing, weaning, limit-feeding, insufficient bedding, noise and restraint. All of these, they say, have been shown to alter the immune system of animals. More recently other stressors such as human-to-animal interaction (handling), a lack of enrichment and live transportation have been added. Taken together, the evidence shows that stress suppresses the immune system in birds and other animals leaving them more susceptible to disease.

“On-farm stressors interfere with the normal behaviour of the animals and have been shown to alter the immune system of animals and susceptibility to diseases.”4EMA and EFSA. 2017. EMA and EFSA Joint Scientific Opinion on measures to reduce the need to use antimicrobial agents in animal husbandry in the European Union, and the resulting impacts on food safety. EFSA Journal. 15 (1) 4666.

The “meatification” of agriculture, driven by the rising demand for meat and dairy, has increased the potential for new zoonotic diseases to emerge.5Bernstein J and Dutkiewicz J. 2021. A public health ethics case for mitigating zoonotic disease risk in food production. Food Ethics. 6 (2) 9. Another study found: “strong evidence that modern farming practices and intensified systems can be linked to disease emergence and amplification.”3Jones BA, Grace D, Kock R et al. 2013. Zoonosis emergence linked to agricultural intensification and environmental change. Proceedings of the National Academy of Sciences USA.110 (21) 8399-8404. Intensive livestock systems, they said, generally have high density populations of low genetic diversity, which may favour increased transmission and adaptation of disease pathogens. They describe how ventilation systems used in intensive livestock farming can spread disease by expelling pathogens such as Campylobacter and avian influenza virus into the environment, increasing the risk of transmission to wild and domestic animals.

In industrial farms, pathogens can move by a number of different unregulated and unrecognised pathways, such as on airborne dust, via insects, in animal waste utilised in agriculture and aquaculture, in contaminated water and on wild animals.6Graham JP, Leibler JH, Price LB et al. 2008. The animal:human interface and infectious disease in industrial food animal production: rethinking biosecurity and biocontainment. Public Health Reports. 123, 282-299.

Factory farms produce large quantities of waste that contain a variety of pathogens capable of surviving for months if left untreated. Open cesspits of pig waste (lagoons) may attract wild birds and waste spread on land can come into contact with wild animals and contaminate water. Similarly, the use of animal waste in aquaculture leads to potential contact with wild birds.3Jones BA, Grace D, Kock R et al. 2013. Zoonosis emergence linked to agricultural intensification and environmental change. Proceedings of the National Academy of Sciences USA.110 (21) 8399-8404.

The international trade of live animals and animal-based food products is also contributing to the pandemic risk posed by food systems. Scientists say that: “the globalised nature of the food animal production industry and supply chain must be recognised for its role in augmenting rapid transmission of pathogens across long distances.”2Leibler JH, Otte J, Roland-Holst D et al. 2009. Industrial food animal production and global health risks: exploring the ecosystems and economics of avian influenza. Ecohealth. 6 (1) 58-70.

While some viruses jump from wild animals to humans, when their habitats are encroached upon for example, Kreuder et al. highlight the critical role farmed animals such as pigs and poultry play via direct contact with people, as well as the amplification of disease transmission in intensive animal production facilities.7Kreuder Johnson C, Hitchens P, Smiley Evans T et al. 2015. Spillover and pandemic properties of zoonotic viruses with high host plasticity. Scientific Reports. 5, 14830. 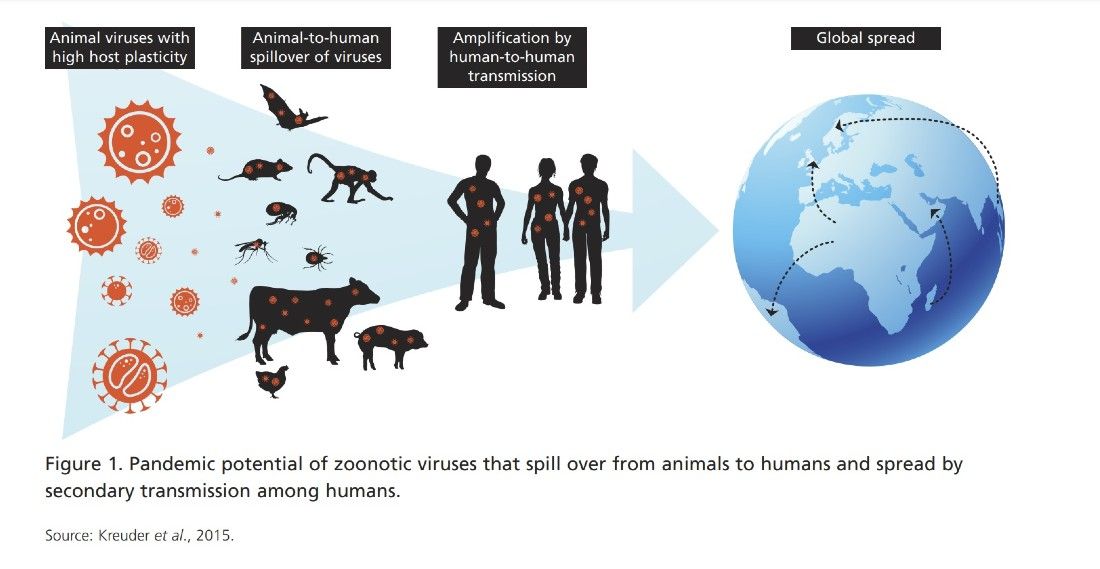 So, for the many disease pathogens (bacteria and viruses) shared by wildlife and farmed animals, it is the latter that play a critical role in facilitating direct contact with people, as well as providing an opportunity for the amplification of disease transmission in intensive animal production facilities.

Researchers from Johns Hopkins University in the US say that: “Many emerging infectious diseases in human populations are associated with zoonotic origins. Attention has often focused on wild animal reservoirs, but most zoonotic pathogens of recent concern to human health either originate in, or are transferred to, human populations from domesticated animals raised for human consumption.” They highlight the often-overlooked threat posed by factory farms: “Although not typically recognised as such, industrial food animal production generates unique ecosystems – environments that may facilitate the evolution of zoonotic pathogens and their transmission to human populations.”2Leibler JH, Otte J, Roland-Holst D et al. 2009. Industrial food animal production and global health risks: exploring the ecosystems and economics of avian influenza. Ecohealth. 6 (1) 58-70.

Intensive agriculture is associated with more than a quarter of all infectious diseases and more than half of all zoonotic diseases.

A survey of the current research found that since 1940, intensive agriculture was associated with more than a quarter of all infectious diseases that emerged in humans and more than half of all zoonotic infectious diseases (that leapt from animals to humans) and suggested that these numbers will likely increase as more and more land around the world is converted to agricultural use.8Rohr JR, Barrett CB, Civitello DJ et al., 2019. Emerging human infectious diseases and the links to global food production. Nature Sustainability. 2 (6) 445-456.

Lead author Jason Rohr, Professor of Biological Sciences at the University of Notre Dame, said that certain steps can be taken to mitigate the proliferation of these pathogens: “Because we share fewer pathogens with plants, decreasing meat consumption might help slow the transfer of these zoonotic diseases. We already have enough food on the planet to feed everyone.” Rohr says, “the distribution of the food to the people who need it is a major issue.”

One of the main drivers of climate change – deforestation, and the conversion of former forests to intensive agriculture – is fuelling zoonotic transfer. Which means that the case for protecting and restoring the world’s wild landscapes is not just to mitigate climate change – it’s also to prevent epidemics before they even start.9Ajani A. 2020. Blame it on the farm too. Available: https://www.sierraclub.org/sierra/blame-it-farm-covid-coronavirus-agricuture-coronavirus-covid-19

Scientists describe how industrial systems can increase animal and public health risks: “Domesticated animals raised to produce human food play a significant role in the emergence of zoonotic pathogens through two primary mechanisms: as a bridge between wild animal reservoirs and human populations, and as the locus of pathogen evolution itself.”2Leibler JH, Otte J, Roland-Holst D et al. 2009. Industrial food animal production and global health risks: exploring the ecosystems and economics of avian influenza. Ecohealth. 6 (1) 58-70. This means that factory farms not only provide a pathway between animals and humans for disease, but the means for that disease to develop into something far deadlier too. We are literally handing these bugs a perfect opportunity to evolve into deadlier forms and spread to humans. An invitation to do their worst.

The science couldn’t be more clear in demonstrating how factory farms are breeding grounds for disease – they are the absolute opposite of social distancing!

References:
NEXT: Bird Flu – Waiting in the Wings
READ
Share it
Scroll up
We use cookies on our website to give you the most relevant experience by remembering your preferences and repeat visits. By clicking “Accept All”, you consent to the use of ALL the cookies. However, you may visit "Cookie Settings" to provide a controlled consent. More info at https://viva.org.uk/terms/
Cookie SettingsAccept All
Manage consent