Don’t get high get healthy. Lowering blood pressure with a vegan diet 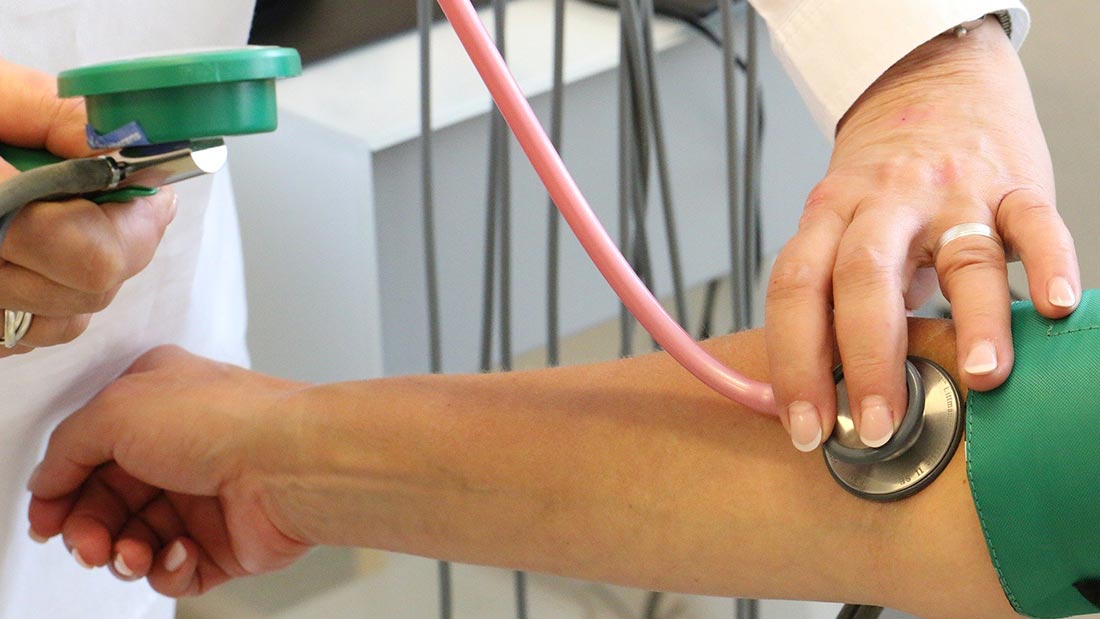 What’s the number one risk factor for death in the world?

Here’s a fun party icebreaker! What’s the number one risk factor for death in the world? I’ll guarantee that almost no one gets the right answer – which is, high blood pressure (hypertension). And yet this silent killer lays waste to the lives of nine million people every year and in the UK, and its victims are becoming ever younger.

An alarming one-fifth of 24 to 32 year olds have high blood pressure; one third of men and one quarter of women aged 40 have it and by the age of 70, we’re expected to have it as if it is an inevitable part of aging – and most of us do. It kills so many because it plays a part in a range of fatal conditions, including heart attacks, aneurysms, heart failure, stroke and kidney failure.

What’s particularly alarming is that damage starts at only small increases above normal levels. Brain scientists have recently made the startling discovery that by age 40, the brain of a person with clinically high blood pressure of 140/90, looks seven years older than the brain of a person with normal blood pressure. The Alzheimer’s Disease Center at the University of California, Davis, USA show that even slightly raised blood pressure, if persistent, causes brain injury and premature brain aging. The higher the systolic blood pressure, the more severe the harm.

These findings are consistent with previous research that links hypertension to brain damage. But this is the first study to show an association beginning so early in life and inflicting the type of injury that causes cognitive decline and dementia. In other words, brain damage caused by high blood pressure in our 30s and 40s causes dementia later in life.

Dr Charles DeCarli, senior author of this study and director of the Alzheimer’s Disease Center says: “The message here is really clear: people can influence their late-life brain health by knowing and treating their blood pressure at a young age, when you wouldn’t necessarily be thinking about it. The people in our study were cognitively normal, so a lack of symptoms doesn’t mean anything.”

Blood pressure should be checked when resting. Single measurements aren’t particularly meaningful. A diagnosis of high blood pressure (hypertension) isn’t normally made unless a high reading is measured on three separate occasions – usually over three months

As always, people love to blame their genes yet medical data collected in the ongoing Strong Heart Family Study in the US shows that 85 per cent of high blood pressure cases are due to our lifestyle, not genetics. And even those with a genetic susceptibility can reduce their blood pressure by changing the way they live and eat.

And the cause of high blood pressure is?

Just about every health body in the world shouts “too much salt” in the diet as the top answer. The NHS also cite being a couch potato, rather liberal with the booze, stuffing down too much food and of the wrong types, smoking and lack of sleep.

The main villain where salt is concerned is the processed food industry, who use ultra-cheap salt and sugar to sell us their junk. Three quarters of our salt intake comes from processed foods rather than a saltshaker. People become hooked on these hyper salty foods.

But another important reason why the food industry uses salt is to increase the profitability of meat.

Salt is added so it absorbs water, which can increase its weight by almost a fifth. Some major UK poultry processors import raw frozen chicken, to which salt has already been added, and then tumble it with water and water-binding additives.

But the biggest culprit for adding salt to the diets of children and teens in the UK is pizza. Dr Michael Greger, health expert and scientific advisor to Viva!, told me: “A single slice of Pizza Hut pepperoni pizza can contain half your recommended sodium intake limit for the entire day. For those between the ages of 20 and 50, the greatest contributor of sodium to the diet is chicken – not the tinned soups, pretzels or crisps you might expect”.

Why is salt the sinner?

Salt directly damages your blood vessels within 30 minutes of eating it. But it also raises blood pressure by making you hold on to water in your blood stream.

Your body removes unwanted fluid by filtering blood through your kidneys, where excess fluid is sucked out and seeps into your bladder to be expelled as urine. To do this, your kidneys use osmosis, a process that uses a delicate balance of sodium and potassium to pull the water across cells from the bloodstream into a collecting channel that leads to the bladder.

The sodium and chloride which make up salt, increase sodium levels in your bloodstream and destroy that fine balance, diminishing the kidneys’ ability to remove water.

According to Blood Pressure UK: “The result is higher blood pressure due to the extra fluid and extra strain on the delicate blood vessels leading to the kidneys.

“Over time, this extra strain can cause kidney disease, reducing their ability to filter out unwanted and toxic waste products, which then start to build up in the body.

“If kidney disease is left untreated and blood pressure isn’t lowered, the result can be kidney failure – when the kidneys are no longer able to filter blood and the body slowly becomes poisoned by its own toxic waste products”.

High blood pressure also goes hand in hand with heart disease. In order to keep pumping, your heart has its own blood supply from the coronary arteries. Heart disease occurs when these arteries start to become blocked. It is a gradual process of furring up with ‘plaques’ – a thick sludge formed from cholesterol and other substances. It’s known as atherosclerosis and can start at the tender age of three if given a bad diet.

Imagine placing your thumb over the end of a hose pipe with water flowing through it. You can feel the pressure on your thumb and water squirts out at high speed. In effect, that’s what your heart has to cope with. It labours to keep beating and can cause horrible chest pain from angina. When one of the coronary arteries becomes completely blocked, you really are at risk of a heart attack.

Cholesterol is found only in animal foods

Cholesterol is found only in animal foods (meat, fish, eggs, dairy and so on) and there is none in any plant food of any kind – even those which contain lots of fat, such as avocados, nuts and seeds, are cholesterol free.

Consuming cholesterol-rich foods can increase cholesterol levels in the body to some extent but much more problematic is the effect of eating animal protein and saturated animal fats. It’s all the usual suspects – dairy, hard cheeses, cream, ice cream, milk chocolate and butter, red and white meats, fish and eggs. Hydrogenated fats are also damaging. Entirely a product of the laboratory, they are hardened vegetable oils and found largely in ‘junk’ foods. Highly appropriate considering they are complete junk.

Animal protein, saturated and hydrogenated fats stimulate the body’s own cholesterol production. Vegetable protein tends to have the opposite effect and soya and oats, for example, can seriously lower cholesterol levels.

Vegan diets turn off the pressure

There is now a welter of science to show that a vegan diet very significantly lowers your risk of high blood pressure by anything between 33 to 75 per cent compared to meat and dairy eaters – where other lifestyle factors are similar. A review of the evidence published in the journal Nutrition Reviews, explains how a diet high in fruits, vegetables, pulses and nuts lowers blood pressure by a variety of mechanisms. And a recent scientific analysis showed vegetarian diets are good for that, but vegan diets are better.

Vegetarian diets confer protection against cardiovascular diseases, some cancers and early death but vegan diets offer additional protection, against high blood pressure, obesity, diabetes type 2 and heart disease. Based on a study of 89,000 people, those eating meat-free diets appeared to cut their risk of high blood pressure by 55 per cent but those eating vegan had a whopping 75 per cent lower risk.

Most of us know someone with high blood pressure because its forceful fingers are squeezing the life out of an astonishing number of people from every walk of life.

Victims of heart attacks and kidney disease are becoming ever younger and given a bad diet even toddlers can start laying down arterial plaques. And yet a vegan diet is a powerful preventer and healer of this largely self-inflicted disease.

It is time to shout it from the roof tops – going vegan is the most powerful tool we have to turn down the pressure.

Juliet Gellatley BSc, is founder & director of Viva! and a nutritional therapist. Viva! is Europe’s largest vegan charity – campaigning for animals, people and the planet. Viva! Health is an arm of Viva! that specialises in vegan health and nutrition. Find out how to eat heart-healthy, lower your blood pressure and veganise your diet at vivahealth.org.uk/heart

• Reduce salt in your diet. Adults should have no more than 6g per day. Use less in cooking, avoid adding it at the table, avoid salty foods – pizzas and meats being amongst the worse. But also avoid snacks such as crisps and canned foods with added salt. Try using fresh herbs and spices to flavour food instead of salt – it won’t be long before your taste buds adapt.

Eat more vegan foods – they protect and strengthen your heart and blood vessels:

• Eat more fibre, such as wholemeal bread and brown rice instead of the white varieties.

Fibre lowers blood pressure and helps to control blood fat levels, which helps to prevent CHD and stroke. Refined grains have been stripped of much of their fibre and nutrients so avoid white rice and ‘enriched’ flour products, which are found in many pastas, bread, bagels and baked goods. Rice bran is an excellent source of fibre and has been shown to lower cholesterol. Buy it from health stores and sprinkle it on breakfast cereals and in stews and soups.

• Maintain a healthy weight. Try the vegan V-Plan Diet by Viva! – £2 from vivashop.org.uk/books/the-v-plan-diet-guide

• Drink alcohol in moderation – no more than a glass a day.

• Stop smoking – and you’ll halve your risk of a stroke. Smoking furs up your arteries, raises blood pressure and changes your blood, making it more likely to clot.

• Reduce stress as much as possible – practice healthy coping techniques such as muscle relaxation and deep breathing. Plenty of sleep can help, too.