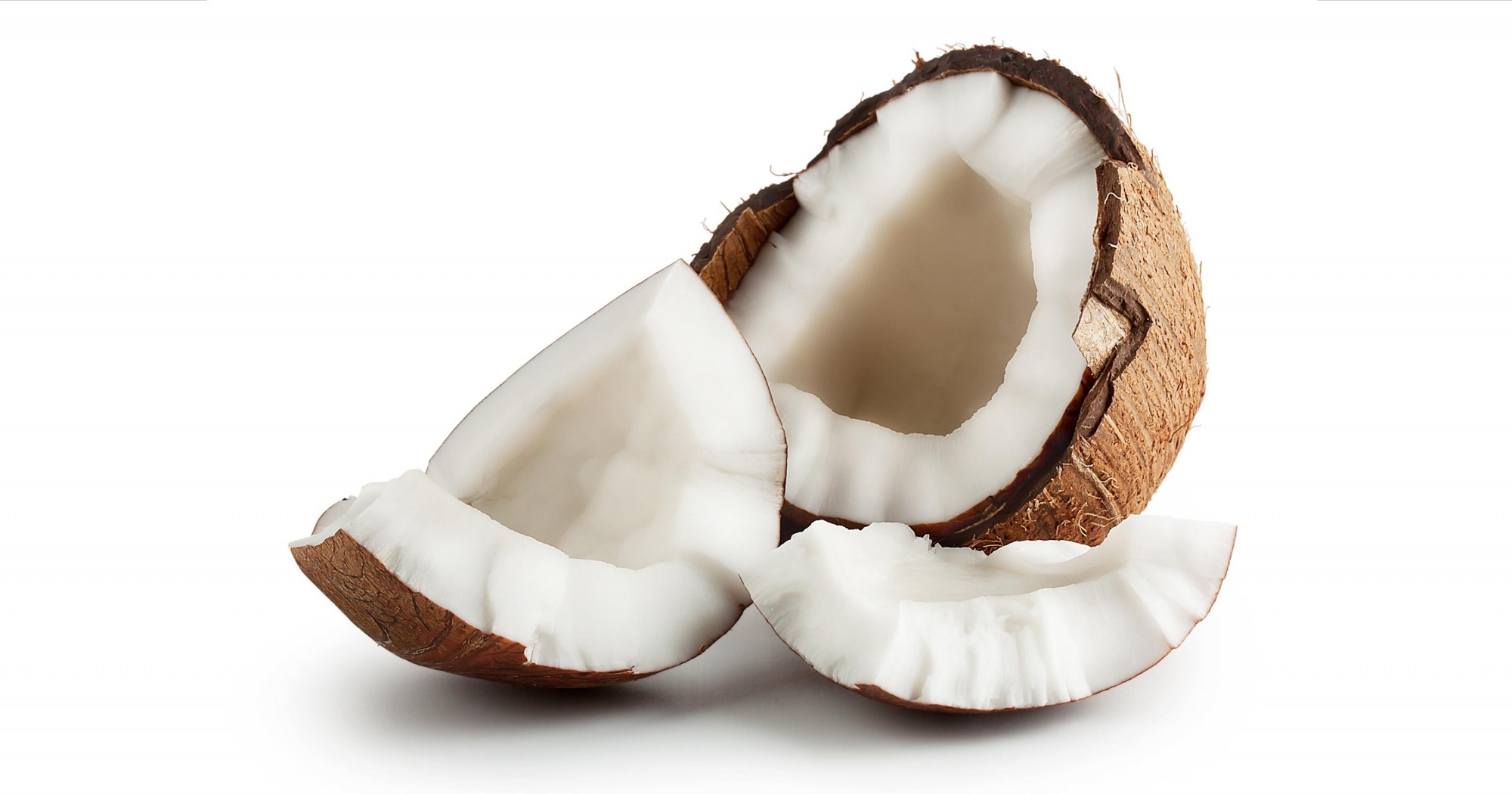 Coconuts originally come from India and Southeast Asia but because they float, they were carried to coastlines all over the Pacific Ocean and successfully made their homes in all the subtropical places they could find. People also contributed to the spread across the Atlantic and now coconut palms grow in virtually all subtropical coastal zones around the world.

The popularity of coconut oil seems to be rising at cosmic speed but is it justified? Most commonly used vegetable oils contain less than 16 per cent saturated fat whilst coconut oil contains a whopping 86 per cent! Coconut oil is an extracted fat and as such contains virtually no protein, carbohydrate or fibre and little to no vitamins or minerals. Some people claim that the saturated fats in coconut oil are different to other saturated fats but research shows there’s almost no difference in long-term health outcomes.

Saturated fat from the foods you eat increases your blood cholesterol levels which, in turn, increase your risk of heart disease so feasting on coconut oil is not advisable. Too much cholesterol in the bloodstream can cause cholesterol-based plaques to develop, narrow the arteries and slow blood flow. The plaques can also break apart and suddenly clog the artery, causing a heart attack or stroke.

Coconut oil is no miracle food but if you use only small amounts in cooking, it probably won’t cause any harm. However, all other culinary uses – such as adding it to drinks or using it instead of butter – cannot be seen as healthy and offer no benefits whatsoever. All the sensational stories about coconut oil being ‘special’ and treating diseases are sadly just marketing.

Coconut oil may not be great for our insides but it can work wonders on the ‘outside’. Virgin coconut oil can help skin prone to acne and to heal mild burns!

Fresh coconut flesh contains 33g of fat per 100g. For example, just one piece of fresh coconut about two inches long contains up to 15 grams of fat – out of which over 13 grams are saturated! So, fresh coconut should be a treat but not your go-to snack.

Desiccated coconut (coconut flesh that has been shredded or flaked and dried) has a fat content of about 62g of fat per 100g. However, it also contains a fair amount of fibre, which may counteract some of the negative effects of saturated fat on blood cholesterol levels.

Coconut milk is the liquid that comes from grated coconut flesh and it can be very thick and creamy or thinner and more milk-like. It’s been one of the main ingredients in Southeast Asia, South Asia, the Caribbean and northern South America for centuries and even millennia in some places, such as India. Of all the plant milks, coconut has the longest tradition of use. In many countries, coconut milk is ‘the milk’.

Coconut milk that comes in cartons has a similar fat content to semi-skimmed dairy milk – around two grams of fat per 100g, most of which is saturated. When it comes to other nutrients, most coconut milks are fortified with calcium (always check the packaging) so are a good source but contain very little else. If you use coconut milk in hot drinks or on cereal, it’s not an issue but if you’re drinking it in large volumes, it might be a good idea to mix it up a bit and use other plant milks with less fat and more protein – soya or oat milk.

Coconut water is the liquid found inside young, green coconuts. It contains some natural sugars, potassium and other electrolyte minerals which is why it’s marketed as a sports drink and a hangover aid. However, for it to be a truly rehydrating sports drink, it’s missing some sodium (salt) and sugar so athletes who use it add a bit of salt or use it to make a smoothie so they can add the missing nutrients. For most of us, who don’t train for hours every day, plain old water will do just as well.

There’s a big difference between fresh (raw) coconut water and the stuff you get in tetra packs, which is pasteurised. The pasteurisation process blasts the water with high heat and, depending on how long the heating lasts, destroys of its nutrients.

Made from coconut milk of varying fat proportions, coconut yoghurts can be worlds apart in their nutrition values. Some are extremely high in fat and those should be left for occasional treat days , whilst others have a much lower fat content. They’re all fairly low in protein so not much to gain there but they contain live bacteria cultures which are good for you. Some are also enriched with calcium and vitamin D but do check the packaging!

The demand for coconuts is growing – according to the UN’s Food and Agriculture Organisation, global demand is growing at 10 per cent a year. Most coconuts are grown by small-scale farmers across Asia Pacific and despite the growing coconut trade, many live in poverty or very basic conditions as the price they’re paid for their harvest is dictated by processors.

As a response, many initiatives have been launched to help coconut growing communities prosper and farm in a sustainable way. If you have a favourite brand of coconut products, check out their website as many have details of their projects. Always look for a Fair Trade label as that should ensure farmers get a proper wage.

Coconut harvesting is an extremely contentious issue. In Thailand and some other countries, pigtailed macaques are trained to do the harvesting because they are much more efficient than people and their labour is ‘free’. It’s been reported that as much as 99 per cent of Thai coconuts are harvested by these monkeys who are either taken from the wild or bred for the purpose and trained. Some say the monkeys are kept like family pets but investigation footage and photos suggest gruelling working hours, monkeys fainting of exhaustion, life spent on a leash, rough handling and absolutely no joy.

A Fair Trade certificate doesn’t mean a monkey didn’t pick your coconut so make sure your coconut product manufacturer has a policy in place that ensures only humans harvest their coconuts.

What to look for?

Coconuts taste great but all the ethical issues and saturated fat make them a not-so-ideal food.  Add to it that unless you live in Southeast Asia, coconut products will always have to travel a long way to reach you and need packaging and you end up in an ethical conundrum. What should we do about it?

Do not rely on coconut products as your staple foods but have them as a treat only. If possible buy organic and Fair Trade to support sustainable coconut farming without chemical fertilizers and pesticides and with proper wages for the farm workers. Most importantly, research the company from which you’re buying coconut products to learn about their ethics.