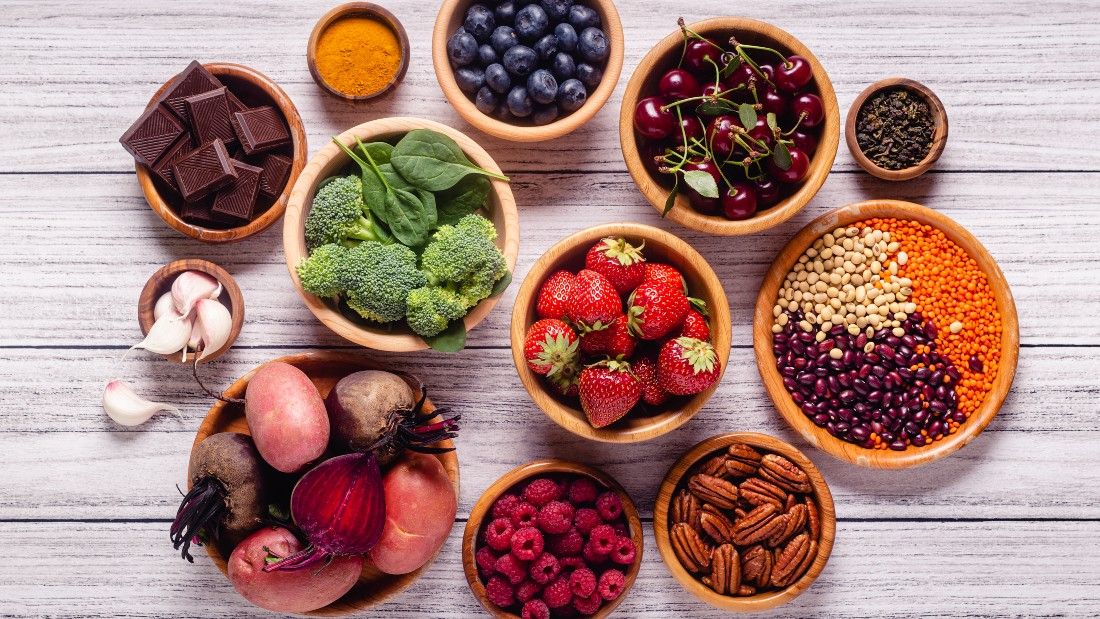 Antioxidants, free radicals and oxidative stress have all become marketing buzzwords of late. We know antioxidants are supposed to be good for us, but what exactly are they, where do they come from and what do they do? Here are five amazing facts about antioxidants to answer all your questions.

Free radicals might sound like the name of a punk band, but their less catchy name, ‘reactive oxygen species’, makes a bit more sense. The destructive capability of free radicals lies in the fact that these oxygen-containing molecules carry a single electron. Because electrons much prefer to travel in pairs, they try to snatch a partner electron from other molecules. They’re not fussy – one from a cell wall will do, even though it may cause that cell to die. Taking one from your DNA may cause a mutation that leads to cancer. The harmful effect of free radicals is what’s known as oxidative stress.

Oxidative stress occurs naturally just by breathing, moving about and when your body converts food into energy. But free radicals are generated in much higher numbers by alcohol consumption, cigarette smoke, pollution, pesticides, ultraviolet light, stress, lack of sleep and fried foods – especially meat. Of course, we can limit our exposure to some of these things by making healthy lifestyle choices, but we can’t stop breathing, eating and moving.

This is where antioxidants come in. They can balance and disarm free radicals by donating an electron without turning into electron-scavenging substances themselves – they neutralise them and knock them out of the game!

2. There are thousands of antioxidants

There are hundreds or even thousands of substances that can act as antioxidants. Our body produces some but most come from our food. The best-known are the ACE vitamins, A (beta carotene), C and E, plus selenium, lycopene and polyphenols, but there are many, many more. Lemon and lime juice prevent oxidation because they contain vitamin C and even soya may have antioxidant properties because it contains phytoestrogen.

3. Antioxidants are unique so collect them all

Although the term antioxidant lumps many substances together, antioxidants actually all behave slightly differently and serve unique biological functions.

That’s why it’s important to eat a diverse range of colourful fruits and vegetables. You’d be better off eating thirty different plant foods over the course of a week rather than focusing on one or two so-called ‘superfoods’, which tend to be more expensive anyway.

We can ensure we get a wide variety of antioxidants by ‘eating the rainbow’ (a bag of Skittles doesn’t count). The natural pigments in plants, called flavonoids, are high in antioxidants so you can easily assess your antioxidant intake from the colour on your plate.

4. Plant foods for the win

A study published in Nutrition Journal listed the antioxidant content of more than 3,100 foods, drinks, spices, herbs and supplements used across the world to produce the most comprehensive antioxidant database ever published. The authors said: “… it shows that plant-based foods introduce significantly more antioxidants into human diet than non-plant foods”.

Other studies show how vegan diets can benefit athletes, suggesting the higher antioxidant levels may offer advantages in recovery.

As well as the colourful fruit and vegetables already mentioned, black and green tea (especially bright green matcha) and coffee all have significant antioxidant properties, but obviously tea and coffee should be drunk in moderation because of the caffeine content.

In nuts, most antioxidants are found in the outer skin, for example in almonds, pecans and walnuts. Brazil nuts are an exceptional source of the antioxidant selenium – two a day can increase blood levels by over 60 per cent. You’ll be pleased to hear that chocolate can be a rich source, but it has to be dark – the more cocoa, the better – so go for 75-99 per cent.

High-dose beta-carotene supplements have, for instance, been linked to an increased risk of lung cancer in smokers, while high doses of vitamin E may increase the risk of prostate cancer and haemorrhagic stroke – a type of stroke caused by bleeding in the brain.

Antioxidant supplements may also interfere with some medications – vitamin E has a blood-thinning effect that could lead to problems in people taking the anticoagulant, Warfarin.

Obtaining all your antioxidants isn’t difficult and including a wide range of colourful plant foods in your diet makes dinner time more fun and varied. As long as you’re eating a diverse range of fruits, vegetables, nuts and pulses, and limiting the things that increase oxidative stress, you should meet your antioxidant goals. The defensive power of antioxidants against disease-causing oxidative stress is one of the many reasons a plant-based diet can’t be beaten.