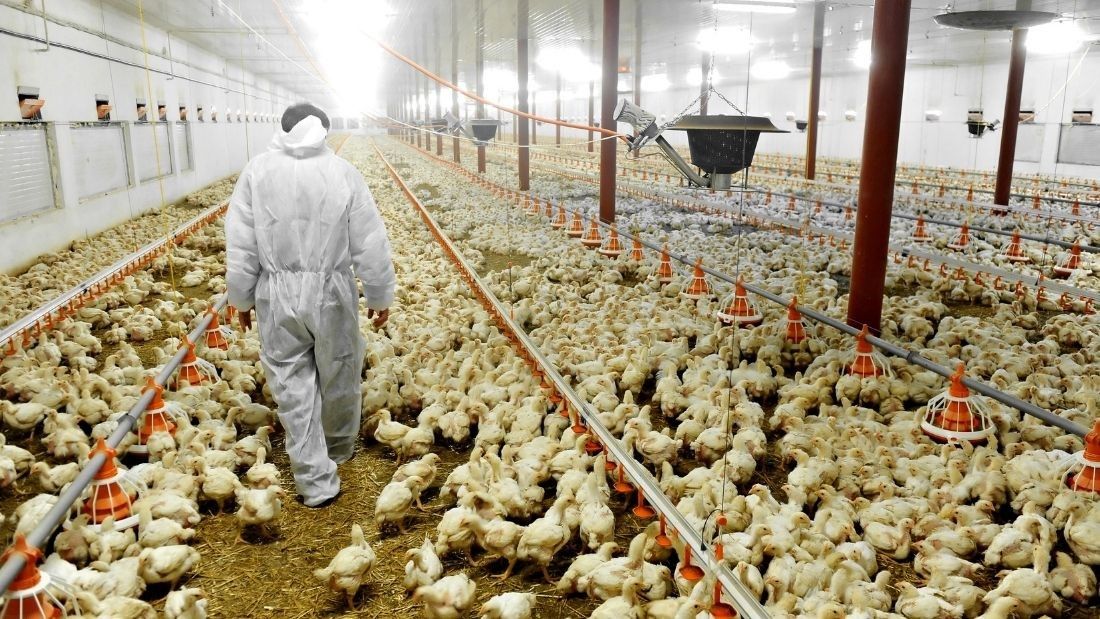 The government have raised the risk of bird flu hitting the UK – it’s time to end factory farming.

The risk of bird flu hitting the UK has been raised from low to medium after two swans were infected in the Netherlands.

The risk of an outbreak occurring in the UK, the government say, is medium in wild birds and low in poultry (provided there’s a good standard of biosecurity where they’re being farmed). This is because, as winter approaches, there is an increasing risk of infection from migrating wild birds, which may infect domestic poultry.

The UK’s four Chief Veterinary Officers issued a statement saying: “Following two confirmed cases of H5N8 avian influenza in the Netherlands we have raised the risk level for incursion to the UK from migratory birds to medium ahead of the winter migration season”. Public Health England say the risk to human health from the H5N8 strain of bird flu is low but they are continuing to monitor the situation.

Defra say that people who keep chickens, ducks, turkeys, geese, pigeons (bred for meat), partridges, quail, guinea fowl and pheasants should keep a close watch on them for signs of disease and maintain good biosecurity at all times.

Birds act as a reservoir for a vast diversity of influenza viruses to which most major human pandemics can trace their origin. But while wild birds may contribute, in part, to the spread of infection, factory farms lie at the heart of the problem as they provide the perfect breeding ground for new and dangerous viruses to emerge.

For example, the H5N1 that caused the 2009 Swine flu pandemic was of avian origin but evolved in a pig farm. The mixing of live pigs from Eurasia and North America, through international trade, created the opportunity for viruses from the different pigs to mix giving rise to what scientists call a ‘quadruple reassortant’ virus containing elements originating from humans, birds, North American pigs and Eurasian pigs. The mutated virus was able to spread from person-to-person, rather like Covid-19, and the outbreak soon became a pandemic. Scientists say it should have been a wake-up call!

As factory farming spreads across the globe, the risk of new infectious diseases spreading through the densely populated sheds rises. Poultry, pigs and other animals kept in horrific conditions are more susceptible to disease due to the extreme stress they experience from their filthy, cramped and inhumane surroundings. Bred for fast growth, their immunity is low. It’s a perfect storm of our own making.

Scientists have been warning about the health risks to humans posed by intensive animal farming units for years. Most governments thought the next pandemic would be caused by a flu virus emerging from poultry or pigs. The best way to combat the risk of further pandemics caused by an avian influenza virus is to go vegan and end factory farming.
Find out more about the links between factory farming and zoonotic diseases here.

Previous post: Say no to animal corpse sites in Snowdonia!
Next post: Bird flu has landed
Scroll up