Vegan hospital food – are we getting better? 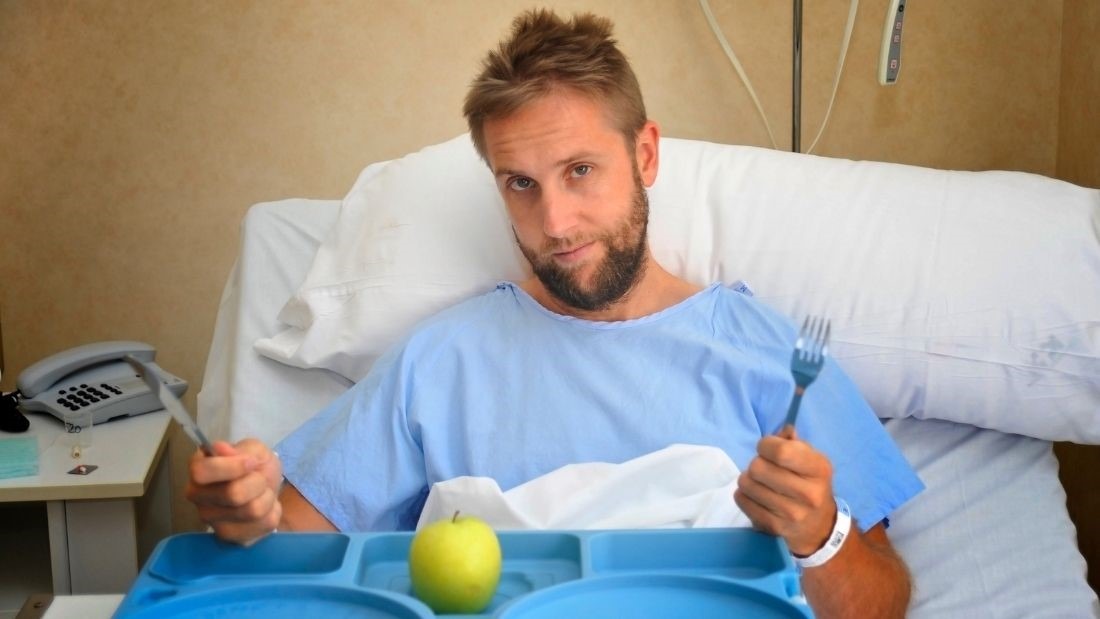 Good nutrition is always important but especially so when you are ill or recovering in hospital. Sadly, too many vegan hospital patients are still being forced to go hungry or make their own arrangements.

With as many as 2.2 million vegans in the UK now, veganism is no longer considered a fad. Most cafés, restaurants and supermarkets provide vegan options and the plant-based food market is booming. So it seems reasonable to assume, that when a vegan goes to hospital (it does happen!), they will be offered something suitable to eat.

Viva! Health have been contacted by many people over the years, who have been left to go hungry in hospital – their stories are heart-breaking. At the time when good nutrition really matters, when you are ill or recovering from an accident or illness, vegan hospital patients are being left feeling hungry, vulnerable and isolated. Food is a fundamental part of well-being and lying in a hospital bed feeling hungry and dreading what the next dinner trolley will bring is not conducive to recovery.

In 2015, after hearing the shocking experiences of vegans in hospitals up and down the UK, I set up the Facebook group Vegan Hospital Food, Hits & Misses, asking people to send in photos of their food – the good, the bad and the ugly! They responded well and have now sent almost 200 photos. There are pictures of lonely, overcooked vegetables perched on the side of otherwise empty plates. Chips, instant mash, peas, diced carrots or sweetcorn with nothing else make a regular appearance as does the ubiquitous solitary baked potato – which was all one patient had to eat for five days in a row.

Patients have been offered lettuce sandwiches with no margarine, liquid instant mash and frozen sprouts, juice as the only option for breakfast. Others have been offered chicken casserole, beef, ham and and cheese sandwiches, macaroni cheese and omelettes – there is clearly a lack of understanding, not only about the balance of foods people need, but about what a vegan diet actually is!

Many patients have sent photos of vegetable or chickpea curry with rice. Most hospitals keep a separate allergy menu that may or may not have vegan options on it. You might find a Kosher, Halal or an Asian vegetarian menu that includes vegan options. If you don’t ask, you don’t get!

There are positive stories too; some patients have been delighted with the food they got. Croydon and Hammersmith hospitals seems to have got the hang of it, with a number of photos sent in from happy vegan patients: beany cottage pies; chickpea curries and rice; baked potato and beans served with a generous mixed leaf salad with grated carrot, cucumber and tomato. Birmingham Women’s Hospital kept a vegan patient hungry when there was nothing for them but redeemed themselves over the next few meals, serving a spicy vegetable casserole, Mediterranean veg pasta and butternut squash and kidney bean rice with salad – “really, really tasty”.

West Suffolk hospital in Bury St Edmunds made someone happy with a butternut squash soup, cottage pie and soya milk rice pudding. Queen Alexandra Hospital in Portsmouth had a lovely vegan menu, according to one patient, with soya mince chilli with rice and peas, Caribbean curry, spinach and chickpea curry, lentil stew and peas or ratatouille, both served with rosemary roast potatoes – “every single one of them was lovely”. If these hospitals can do it, they all can.

There is a wealth of evidence showing how plant-based diets lower your risk of high blood pressure, high cholesterol, obesity, diabetes, heart disease, stroke and certain cancers. Vegans are less likely to suffer from these but we are not bullet-proof and if we go to hospital, why shouldn’t we expect to be offered healthy food?

Every year, the NHS serves more than 140 million meals to patients across the country at a cost of £560 million in 2016/17, that’s an average of around £11 per patient per day, but in some hospitals, NHS patients are being fed meals made for less than £1 per head! The lack of basic nutritional knowledge displayed by some catering companies running food services is simply not acceptable. They should be including healthy vegan options in their daily menus like most other catering businesses.

In 2019, an employment judge determined that ethical veganism satisfies the tests required for it to amount to a philosophical belief and is therefore protected under the Equality Act 2010. This decision has an impact in the employment setting but also in the provision of goods and services. Dr Jeanette Rowley, a legal expert with the Vegan Society, said: “It’s a fantastic day for animals and it’s a fantastic day for vegans who should get more institutional support in hospitals or in schools”.

Going hungry in the pandemic

In 2020, vegan patients are still routinely going hungry or having to rely on family and friends to feed them. This, of course, has been impossible during the coronavirus pandemic when hospitals had to suspend visiting and patients were left to eat what there was, or go hungry.

Where people have mentioned the care they received, they have all heaped praise on healthcare workers, doctors and nurses. Our NHS is something to be extremely proud of, and they have been pushed to the limits during the Covid-19 pandemic. However, given the strong links between poor diet and disease, it’s time for health authorities to step up and ensure that there is better provision of vegan food on hospital menus.

Everyone can eat vegan food, so making sure it’s the norm, rather than the exception, will promote inclusivity, sustainability and good nutrition.
Find out why a vegan diet is so good for health in our Incredible Vegan Health Report.