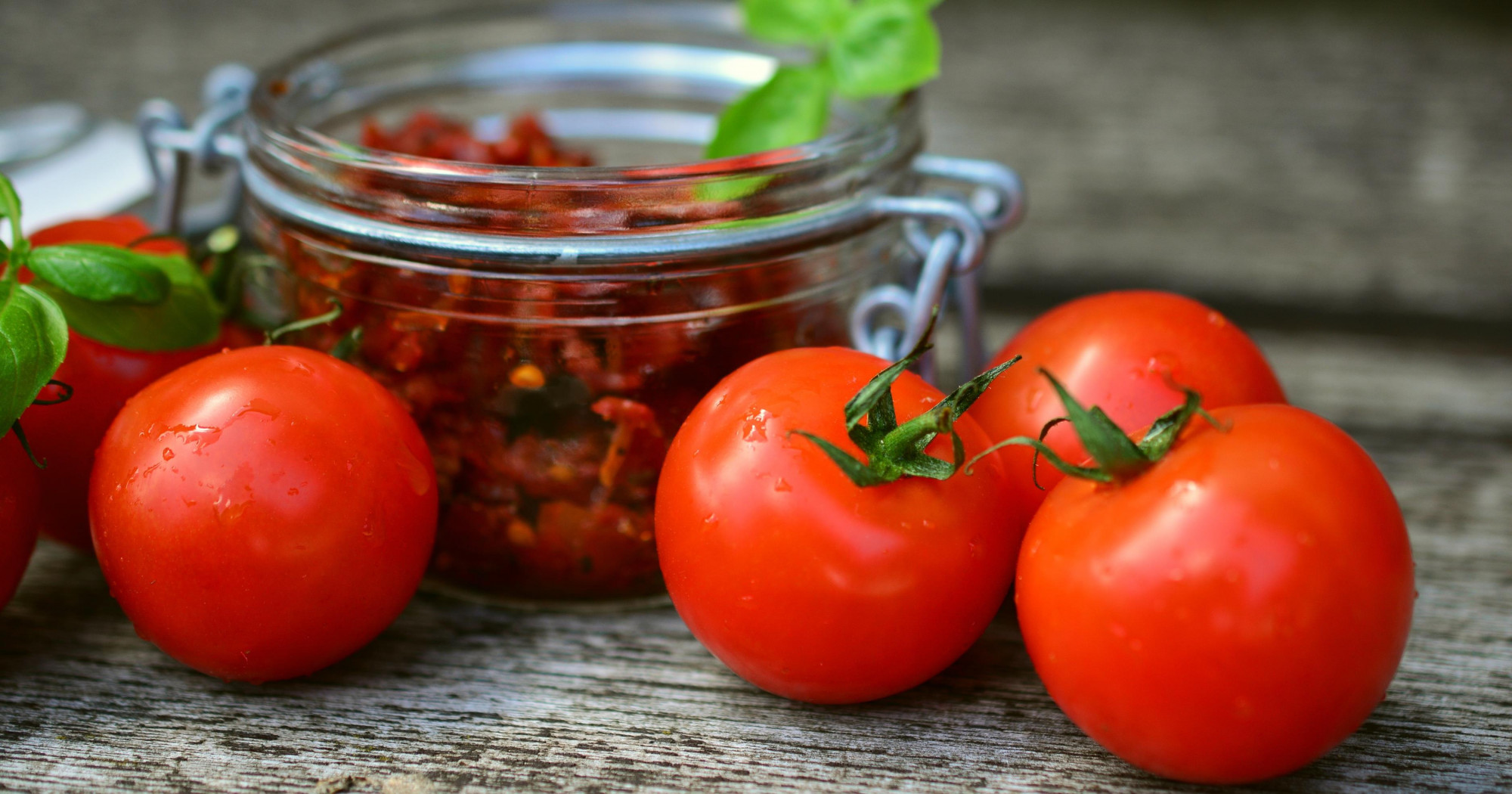 Tomatoes are 95 per cent water but they still manage to pack in good quantities of important nutrients. One medium tomato provides a quarter of your recommended daily intake of vitamin C, a fifth of your vitamin A (as beta-carotene), 12 per cent of vitamin K and eight per cent of potassium. It also contains 1.1 grams of protein and 1.5 grams of fibre – mostly insoluble fibre, the kind that helps to keep you regular and supports all the good bacteria in your gut.

Whatever the shape or size of tomatoes, they don’t vary significantly in their nutrient content so a cup of cherry tomatoes would be nutritionally equivalent to one larger tomato. Where they do vary is in their taste so you may prefer one variety over another.

Green, red, orange, yellow and even purple – tomatoes come in a range of colours and their pigments are responsible for many of their health-promoting qualities.

The main tomato powerhouse is lycopene – a red pigment that is a strong antioxidant that has been linked to many health benefits, including reducing the risk of heart disease and cancer.

The redder the tomato, the more lycopene it contains and the peel contains most of all. Tomato products, such as tomato juice, tomato puree and tomato-based sauces, actually contain more lycopene than fresh tomatoes because they are more concentrated. Cooking also increases the lycopene content and if you have some healthy fats along with your tomatoes, it’ll help your body absorb more lycopene.

Beta-carotene is another important pigment that tomatoes contain – responsible for the yellow and orange hues and also an antioxidant that your body converts into vitamin A. Carrots are a rich source (hence the name) but ripe and tinned tomatoes are an excellent source, too

Tomatoes are one of the main veggies that are increasingly grown in hydroponic systems which makes them available all year round. Hydroponics involves growing plants in greenhouses but instead of soil or compost, nutrient-rich water bathes their roots and supplies everything they need. This system has several advantages – as there are no weeds or pests, it allows for pesticide-free farming plus it requires only about 10 per cent of the water used in conventional farming and takes up less space, too. The disadvantages are that it requires a lot of care and relies heavily on electricity. Nutritionally, hydroponic tomatoes are the same as conventionally-grown ones.

Some fertilisers are allowed so while hydroponic tomatoes are not organic as, they may be the next best thing. Problem is, when shopping, you can’t tell which is which.

Tomatoes are an exception in that they don’t lose much of their nutritional value when tinned. Some of their vitamin content – particularly vitamin C – is reduced a little but the protein and fibre levels are actually a little higher than in fresh tomatoes. Tinned toms also have more of the red pigment lycopene, which is a big health bonus (see below).

Most tomatoes destined for tinning are grown specifically for that purpose and are usually processed local to where they’re produced – so they’re not the old rejects that some people might think.

Surprise, surprise – tomatoes are great for the skin. Thanks to their high lycopene content and other powerful antioxidants, tomatoes and tomato-products help to protect your skin from sun damage. Scientific studies of people’s consumption of tomato products found that those who consumed tomatoes daily were much less likely to get sunburnt. Tomatoes are certainly no sunblock replacement but they may prolong the time it takes for your skin to burn!

Tomatoes originated in South America and when Aztecs began cultivating them to produce larger, redder and sweeter fruits, they called them xitomatl, meaning plump thing with a navel.

You’ve probably tasted some deliciously flavourful tomatoes in your life but also bland, watery ones that weren’t worth your money. The key difference is in the ripening process. When tomatoes begin to ripen, they start producing a gas called ethylene, which speeds up the ripening process. If tomatoes are allowed to ripen in the sun, they fully develop their flavour and lose some water, resulting in a more concentrated, rich taste.

Mass-produced tomatoes, on the other hand, are often harvested and transported while still green and unripe. To ripen them before they’re sold, they are placed in special chambers and flooded with artificial ethylene gas. It produces the right colour but doesn’t allow them to develop that delicious natural flavour and so they can end up bland and watery.

It’s usually best to choose locally grown tomatoes – not just to protect the environment but because they tend to taste better, too!

Tomatoes belong in the nightshade family, along with aubergines, peppers and potatoes. Most people can digest them without any problem but there are a few potential issues for people with specific health conditions. Nightshades may not agree with people with inflammatory gut conditions, such as IBS or leaky gut syndrome. Arthritis can sometimes also be aggravated by nightshade veggies, including tomatoes.
All these potential food sensitivities are very individual and there’s no hard and fast rule to guide you. If you suspect that nightshades may be an issue, experiment by excluding one food at a time to see what results it brings. You might discover that just one specific vegetable is the culprit.

Try to always eat tomatoes with their skins on to make the most of the health-protective lycopene that’s most concentrated in the skins!